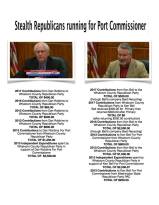 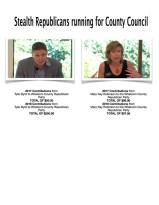 A joint campaign flyer paid for by the campaigns for four self-described “nonpartisan” candidates running for office in Whatcom County in the November general election, just arrived in voters’ mailboxes. The top of one side of the flyer reads: “Tired of Partisan politics? So are we.” The flip side of the flyer reads, in part: “We Don’t Want To Be Elected By A Political Party, We Want To Be Elected By The People.”