On Monday, July 10, The Vera Institute presented its preliminary data findings on the Whatcom County justice system at a special meeting of the Incarceration Prevention and Reduction Task Force (IPRTF). It took months for the Vera Institute to obtain the necessary data on the County Jail population in 2016, but the results confirmed stunning racial disparities in the jailed population, as well as a sizable pre-trial population that could be significantly reduced with the use of evidence-based methods of incarceration prevention. END_OF_DOCUMENT_TOKEN_TO_BE_REPLACED

On June 27, 2017 the Whatcom County Council’s Special Committee of the Whole (made up of all seven council members) met for an afternoon session to discuss the letter they had been sent by the Bellingham City Council regarding the currently proposed Jail Facility Finance and Use Agreement.  I listened to the audio of the meeting and wrote up fairly detailed summaries of the comments and discussions during the meeting that I had posted in the comment section to a Facebook post. I thought I would share that material here to give more people access to the information, since it might come in handy over the next few weeks while the JFFUA is under consideration and the potential looms of a .2% tax to finance a new Whatcom County Jail going on the November 2017 ballot.  Here is the link to the audio for that meeting: Special Committee of the Whole PM June 27 2017.mp3

END_OF_DOCUMENT_TOKEN_TO_BE_REPLACED

At the Public Hearing at next week’s County Council Meeting on Tuesday June 13 at 7 p.m. (rally at 6:00 beforehand), it seems our comments on jail bed numbers (the number of people we envision being incarcerated in our county in the future) need to be based on all the best statistical data we have in our private-citizen hands that supports that we now have all the tools at our disposal, and will continue to have more, that will allow a reduction in the number of people we are incarcerating and that we are ready to begin a new age that abandons our failed justice system. END_OF_DOCUMENT_TOKEN_TO_BE_REPLACED

Click this graphic to go to the search results page on NorthwestCitizen where you can access any of these reports.

Keep reading this series of reports on NorthwestCitizen to get an in-depth look at the history of the plan for a horizontal mega-jail. The next installment after those shown in this screenshot of search results for “Illusion of Inclusion” on NorthwestCitizen is also available on their website (it has a slightly different title). END_OF_DOCUMENT_TOKEN_TO_BE_REPLACED

Part One: The Illusion of Inclusion: How County-appointed Councils, Panels, Committees and Task Forces provided: (1) Cover for Executive decisions about crucial criminal justice issues; and (2) plausible deniability for the exclusion of meaningful public participation.

END_OF_DOCUMENT_TOKEN_TO_BE_REPLACED 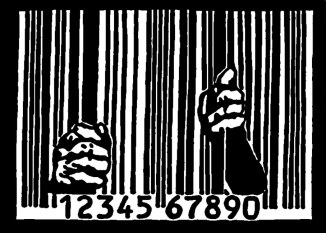 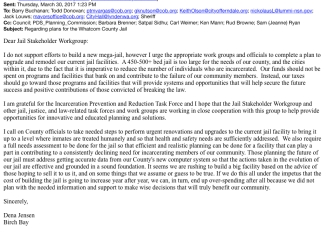 I got an email from Sheriff Elfo this morning in response to an email I wrote back on March 30, to the Jail Stakeholder Work Group (my email is shown in the graphic). This resistance-is-futile kind of quote from the Sheriff bugs me the most: “Despite all that is being done and can be done outside the context of the jail, there will continue to be a need for a jail. The law requires it.” END_OF_DOCUMENT_TOKEN_TO_BE_REPLACED

One open door is not enough

The life of a lowly editorialist is such that we often don’t have access to the resources needed to redress the grievances we detail.

END_OF_DOCUMENT_TOKEN_TO_BE_REPLACED

The Voice of Authority

This election, featuring a huge jail tax proposition, has seen much talk about the “dilapidated” jail that is “literally falling apart.”  In a questionable jail mailer Sheriff Elfo cites, “severe and unsustainable conditions within the jail that jeopardize staff, visitors and inmates.”

This begs the obvious: Why has the jail not been fixed after taxpayers approved a sales tax to do so?  According to a letter from Elfo to County Executive Jack Louws on April 22, 2015, Elfo says, “it would be imprudent to invest major capital to remodel and continue utilizing a facility” described as “inadequate, failing and dangerous.”  That makes their 2004 jail tax campaign look like a bait and switch.  And when was that decision made?  By whom? Does Elfo really have the authority to overturn the electorate’s intentions? […]

The jail proposal is wrought with troubling contradictions.  The only way to prevent a massive misappropriation of public funds – a tax heist – is to vote down Prop. 2015-1 and start over on a downtown jail, next to the courthouse with good programs out front to keep folks out of jail. END_OF_DOCUMENT_TOKEN_TO_BE_REPLACED