The Lay of the Land for Public Banking

The Case for Public Banking

Public banks are an effective way to use public funds for the good of communities, much like public utilities, instead of for the profit of private mega-banks that take the public’s money and use it to play in the Wall Street casino. END_OF_DOCUMENT_TOKEN_TO_BE_REPLACED

One thing we learned watching the movie Deepwater Horizon is that British Petroleum puts greed ahead of concerns for human life and the environment. That greed led to BP paying $4.5 billion in fines and penalties in the largest criminal resolution in US history. END_OF_DOCUMENT_TOKEN_TO_BE_REPLACED 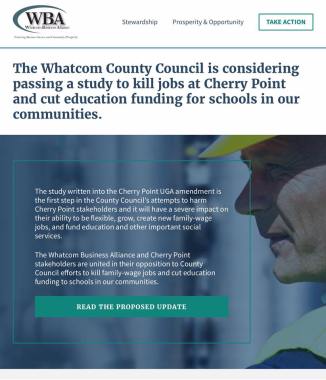 Initial text and graphic displayed, as of this writing (02/25/2017), by Whatcom Business Alliance on preservecherrypoint.com , a webpage used by the WBA for eliciting oppositional emails to proposed Whatcom County planning policy that would study legal ways the County can work to limit unrefined fossil fuel exports above levels in existence as of July 5, 2016

Once again, Cherry Point fossil fuel industry advocate Whatcom Business Alliance (WBA), under the leadership of its President Tony Larson, uses propaganda that misleads the public, in an effort to motivate people to submit WBA’s form-generated comments on the Cherry Point Amendments to the County Comprehensive Plan Update, currently under review by Whatcom County Council. END_OF_DOCUMENT_TOKEN_TO_BE_REPLACED

Tacoma, WA- We the grassroots undocumented led communities that worked with Senator Lisa Wellman in building a new process for introducing public policy in Olympia, want to thank Sen Wellman for listening to our voices and drafting language with us that would have provided a sense of dignity and protection from federal immigration enforcement by ending their collaboration with local law enforcement departments. END_OF_DOCUMENT_TOKEN_TO_BE_REPLACED

US Gasoline Inventories are at a 27-Year High

US gasoline consumption down 8% from same period in 2016
February 21, 2017  David Camp
As the graphic shows, US gasoline inventories are at a 27-year record high. And yet, gas prices and oil prices continue to rise – having increased by about 30-40% (depending on the grade and source) in 2016. And as the second graphic shows, US gasoline consumption in the first part of 2017 is down 8% from the same period in 2016. Strange things are happening –

END_OF_DOCUMENT_TOKEN_TO_BE_REPLACED

Will the council approve a Critical Area Ordinance (CAO) that does not comply with the GMA? It is looking more and more likely. I am sick to my stomach thinking that after just one “general issues” work session, council will be ready to vote on the updated Critical Area Ordinance. It really did not help that few people participated, but how could they when there was no real training provided on such a technical issue? Perhaps if the CAO was not improperly separated from the Comp. Plan update, it would have been easier to obtain public input. END_OF_DOCUMENT_TOKEN_TO_BE_REPLACED

Washington State Senator Doug Ericksen (R-Ferndale), has been in hot water with constituents in the 42nd Legislative District he represents in Whatcom County, Washington, since late January. The lawmaker has drawn an outpouring of criticism from his constituents who feel Ericksen is under-representing them because of his current dual role as state senator, while also having recently accepted a position as Communications Director with the Environmental Protection Agency (EPA). END_OF_DOCUMENT_TOKEN_TO_BE_REPLACED 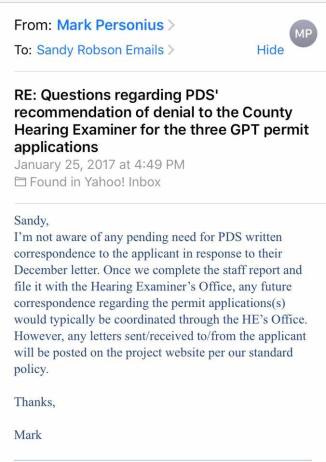 Our Whatcom County Planning and Development Services Department (PDS), which is part of our County Administration under the direction of County Executive Jack Louws, needs to start being fully transparent with the public in matters relating to the Gateway Pacific Terminal project. END_OF_DOCUMENT_TOKEN_TO_BE_REPLACED

–Whatcom Business Alliance’s SEPA appeal of the DNS issued for the Cherry Point Amendments is scheduled for a March 15, 2017 hearing, at 1:30 PM–

The Whatcom Business Alliance (WBA), headed up by President Tony Larson, filed a SEPA appeal of the Determination of Non-Significance (DNS) that was issued by Whatcom County Planning and Development Services, for the Cherry Point Amendments to the 2016 County Comprehensive Plan Update. END_OF_DOCUMENT_TOKEN_TO_BE_REPLACED 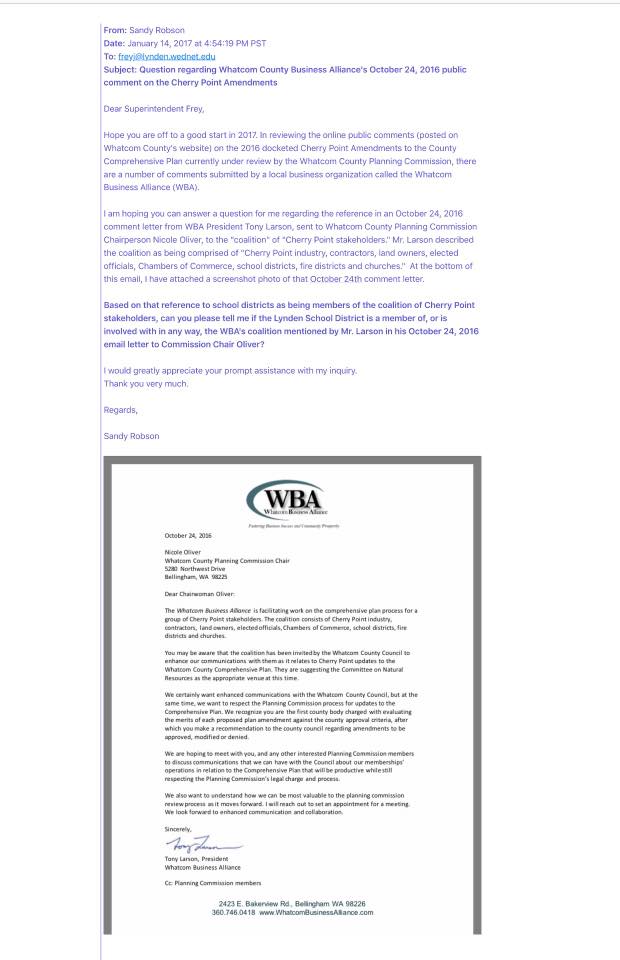 I sent an email letter today to the Whatcom County Planning Commission and the County Council, regarding Tony Larson’s Whatcom Business Alliance’s (WBA) claim that “school districts” are members of the WBA Cherry Point coalition/stakeholder group. I looked into this matter and sent my findings to the Commission and Council. END_OF_DOCUMENT_TOKEN_TO_BE_REPLACED