Screenshot of a portion the show outline (available on the show’s website) for KGMI’s January 11, 2020 Saturday Morning Live radio show,

On KGMI’s January 11, 2020 conservative talk radio show, Saturday Morning Live, host Kris Halterman had James McKinney – referred to as Jim – as her guest.  McKinney, a retired Lieutenant Colonel with the United States Army, is president and CEO of Apple Mountain LLC, whose principal office, according to the Washington Secretary of State website is in Blaine, Washington. END_OF_DOCUMENT_TOKEN_TO_BE_REPLACED 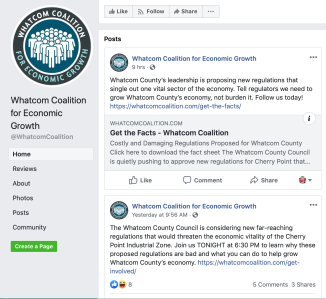 Screenshot of the ‘Whatcom Coalition for Economic Growth’ Facebook page

This month, folks may have been seeing sponsored Facebook ads for the Whatcom Coalition for Economic Growth. This is a fairly new “project” of the Whatcom Business Alliance that seems to be putting on a full court press during this time that the Whatcom County Planning Commission is reviewing the Cherry Point Amendments. This WBA effort is not unlike Cascade Natural Gas’s misinformation campaign regarding the Climate Action Plan Task Force.
END_OF_DOCUMENT_TOKEN_TO_BE_REPLACED 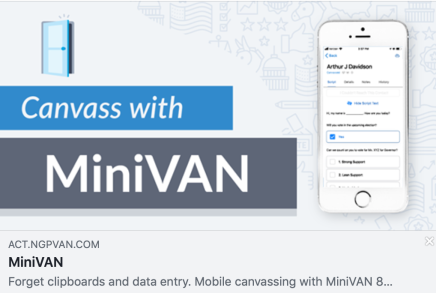 Corky fired up the MiniVan for a tour of one of the city’s neighborhoods to check up on the Hamsters’ participation in the election cycle. Only a few were flagged as “Voted,” so it was turn-out-the-base time in Blue Bellingham to counteract the efforts by the tarred and feathered candidates to turn out their Tea Party/Trumper settler base.  END_OF_DOCUMENT_TOKEN_TO_BE_REPLACED 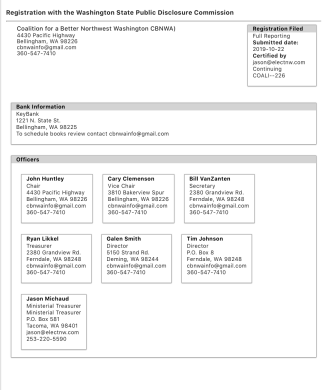 Screen shot of the (C1 report) for the Coalition for a Better Northwest Washington filed with the Public Disclosure Commission. The C-1 report, originally filed on August 21, 2019, as shown in this screenshot, displays a submission date of October 22, 2019 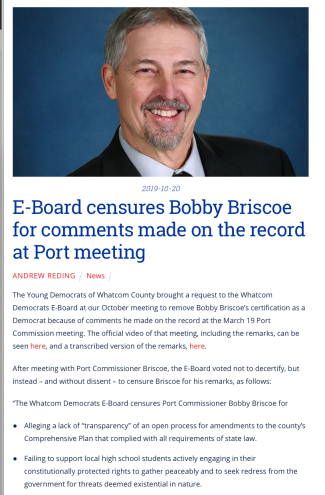 Click the graphic of a photo of a smiling man with short gray hair, mustache and goatee in a dress shirt and sport coat, with text beneath the photo to access the Whatcom Democrats post, “E-Board censures Bobby Briscoe for comments made on the record at a Port meeting,” on their website

Port of Bellingham Commissioner Bobby Briscoe just received a censure from the Whatcom Democrats E-Board today based on a request from the Young Democrats of Whatcom County that they remove Bobby Briscoe’s certification as a Democrat. You can read complete information regarding the censure at this link: https://www.whatcomdemocrats.org/2019/10/20/e-board-censures-bobby-briscoe-for-comments-made-on-the-record-at-port-meeting/

END_OF_DOCUMENT_TOKEN_TO_BE_REPLACED

I am calling on everyone to just say no to participating in events sponsored by Common Threads Northwest, along with the Whatcom Business Alliance, whose leadership is pushing forward untruths that people want to deindustrialize Cherry Point.

END_OF_DOCUMENT_TOKEN_TO_BE_REPLACED

Tony Larson—candidate for Whatcom County Executive—is on a mission from God. Indeed, he is a featured speaker at the 2019 NW Business Leaders of Faith Conference.

END_OF_DOCUMENT_TOKEN_TO_BE_REPLACED

Day 3 of posts on the way to getting Doug’s anti-tribal-treaty attitudes out of office when we vote in November.

END_OF_DOCUMENT_TOKEN_TO_BE_REPLACED

Local business advocacy and non-profit organization, Whatcom Business Alliance (WBA), sent out a May 2, 2018 email blast to its members, thanking those who attended the “Leaders of Industry” event hosted by the WBA the week before, and promoting its “Step Up for Business Advocacy” program. The email was signed by WBA’s recently hired Public Policy Director, Brett Bonner, who has been involved in Republican politics in Whatcom County for many years.