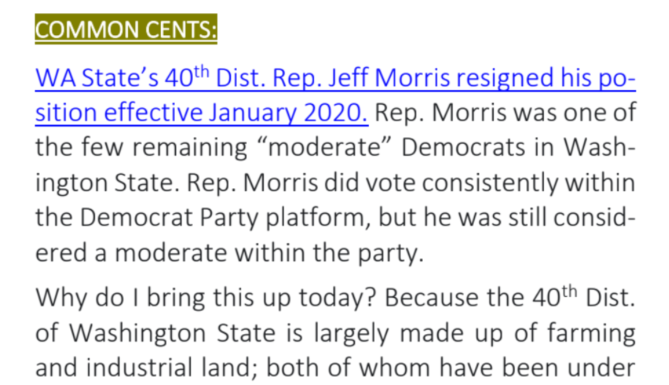 Screenshot of a portion the show outline (available on the show’s website) for KGMI’s January 11, 2020 Saturday Morning Live radio show,

On KGMI’s January 11, 2020 conservative talk radio show, Saturday Morning Live, host Kris Halterman had James McKinney – referred to as Jim – as her guest.  McKinney, a retired Lieutenant Colonel with the United States Army, is president and CEO of Apple Mountain LLC, whose principal office, according to the Washington Secretary of State website is in Blaine, Washington.

During the show, Halterman had focused her “Common Cents” segment on the appointment of environmental advocate and Bellingham resident, Alex Ramel, to the 40th District representative seat, replacing Democratic Representative Jeff Morris who resigned the position in late November, 2019. Following voicing her opinion, which reflected her dismay over the appointment of Ramel, Halterman sought McKinney’s input, saying: “Jim, what do you think? You’ve had some experience with Mr. Ramel.”

McKinney’s response involved some harsh allegations about Ramel for which he did not provide substantiation, except for saying, “I’ve got the letter to prove it.” However, if McKinney was referring to the letter, dated May 22, 2017, sent by Stand.earth, for which Ramel is the Extreme Oilfield Director, the claims that McKinney made regarding Ramel’s actions are clearly false.

Jim McKinney had previously appeared on Halterman’s Saturday Morning Live show in May 2017, aghast at the letter sent out by Stand that month, and signed by Alex Ramel and Matt Krogh. The two men work for the environmental organization which states on its website, “As we’ve done since the start, we pursue audacious solutions, campaign for as long as it takes to see them through, punch way above our weight, and treat everyone, including our adversaries, with respect. Our work has resulted in sweeping industry-wide changes and environmental protection on a massive scale.”

But no matter how many times McKinney and Halterman had used some version of the word “threat” in regard to the letter sent out to Whatcom Business Alliance members from Stand.earth, the two trying to assert from their perspective that businesses were being threatened by what was written, they never made the specific charges in 2017 that McKinney made this weekend. 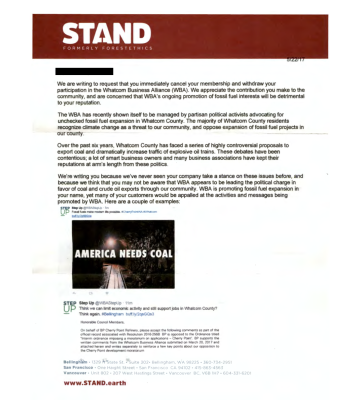 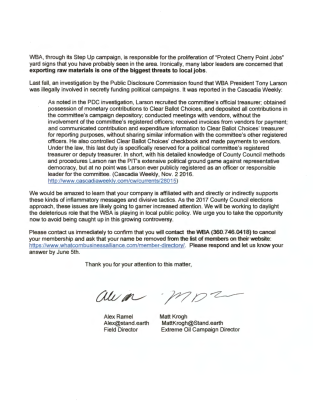 Now, here is McKinney’s response to Halterman’s request for his input regarding his experience with Ramel:

“Just a little bit of an interaction with Alex. So, back a couple of years ago, the Cherry Point industries and a lot of their employees, and a lot of businesses that were actually very concerned about the potential, the impact of shutting down the fossil fuel industry – our most powerful, influential, of course, most well-paying jobs in the County in those businesses. They got together and they began to put out signs and posters: Preserve Cherry Point Jobs. And there was a lot of push-back for the businesses that actually were supporting that.

“What Alex did, is he wrote a letter from Stand.earth and he sent it to businesses around the County threatening them, to expose them, and protest, and picket against them, if they supported that, which in my perspective, you know, was actually quite, quite a bad idea.”

In the May 22, 2017 letter, however, it is quite evident there is no threat to businesses which were sent the letter that Stand would expose them; no threat to protest the businesses; no threat to picket against them. The concerns that Stand had expressed were related to how the Whatcom Business Alliance’s actions regarding promoting coal industry projects and fossil fuel industry exports seemed to be at odds with the good contributions of the businesses they had contacted.

As ironic context for McKinney making unsubstantiated claims, here’s a little recent history involving McKinney contacting Noisy Waters Northwest in October of 2019, objecting to being referred to in a way that he claimed was false. McKinney had been an executive director for Common Threads Northwest during the time that the Whatcom Tea Party had announced, in early 2017, that they were closing their doors and had urged their followers to subscribe to the Common Threads Northwest mailing list. In their announcement the Whatcom Tea Party had said, “The tea party lives on, but with new names and new organizations.” The one organization that was mentioned by name in that announcement was Common Threads Northwest.