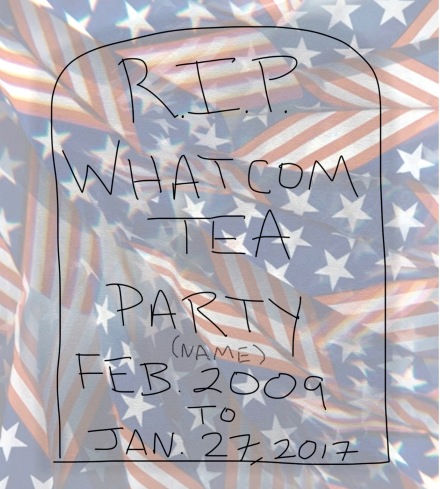 “It is with some regret, but also the knowledge that it was a great catalyst, that the Whatcom Tea Party closed its doors effective January 27, 2017, so that we can continue to move forward with our new projects. The tea party lives on, but with new names and new organizations.

“One of the main Whatcom Tea Party assets is our mailing list. We would like to transfer it to Common Threads Northwest. However, we feel it would be unethical simply to transfer your contact information to another organization without permission, so we won’t do that. But we would appreciate it very much, if you would take this opportunity to subscribe to the Common Threads Northwest mailing list. Please click this link to subscribe. You will find many of your Whatcom Tea Party friends over there.”

Apparently, the dark money-funded entity, Common Threads Northwest, will be essentially assuming the former roles of both the Whatcom Tea Party and the 2013 affiliated political action committees SAVEWhatcom and Whatcom First. Not that it should come as any kind of surprise to people, because some of the same names involved with the Whatcom Tea Party and the affiliated SAVEWhatcom and Whatcom First PACs, are involved with Common Threads Northwest. 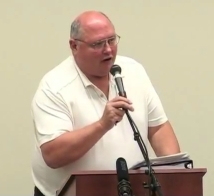 According to Common Threads Northwest’s March 3, 2015, registration with Washington state’s Secretary of State, the group’s listed directors were: Chet Dow, Larry Helm, and John Kirk (Kirk, presently is no longer listed as a director). Dick Donahue was listed as Chairman. Donahue, Dow and Helm are presently listed as governors for the organization. All three of them were the beneficiaries of expenditure advertising, via the SAVEWhatcom/Whatcom First affiliated PACs which had received a $10,000 cash campaign contribution from Gateway Pacific Terminal (GPT) applicant Pacific International Terminals (PIT), a subsidiary of SSA Marine, during the 2014 Whatcom County elections.

Donahue is a Bellingham financial planner who founded and runs Asset Advisors, LLC. He is also the talk radio host for his Wealth Wake Up weekly program on KGMI. The GPT consortium had also funneled $149,000 into the affiliated SAVEWhatcom and Whatcom First PACs, which were founded in 2013 for the 2013 Whatcom County elections by Donohue, and by Kris Halterman, a former Whatcom Tea Party board member and current conservative talk radio host for her weekly Saturday Morning Live program on KGMI. Donahue was listed on the September 16, 2013 Whatcom First PAC’s C1pc registration form as a Committee Officer (later amended on October 17, 2013 to Campaign Manager) for the coal terminal-funded Whatcom First PAC. Donahue ran, unsuccessfully, for a Whatcom County Charter Review Commissioner seat in the 2014 election.

Chet Dow was a 2015 Charter Review Commissioner, and has been an Executive Board member of the Whatcom Republican Party. Dow was listed as a Committee Officer on the September 16, 2013, registration form for the Whatcom First PAC.

Larry Helm ran, unsuccessfully, for a Charter Review Commissioner seat in the 2014 Whatcom County elections, and is currently a Whatcom County Conservation District Supervisor. Helm is also presently the State Committee Man for the Whatcom Republicans, and has been an Executive Board member of that organization.

John Kirk, who was once listed as a director for Common Threads Northwest, has been the author of the local conservative blog “Whatcom Works.” He was actively involved with the 2015 Charter Review Commission process, which included his efforts helping to author a Charter Amendment that targeted the funding of Whatcom County environmental non-profit organizations.

In late 2016, Common Threads Northwest hired James (Jim) V. McKinney, as Executive Director. McKinney, and his wife Laura McKinney, formed Apple Mountain LLC, Consulting and Development, in Blaine, Washington, according to its company’s website (applemountainllc.com). Jim McKinney is listed as President, CEO, and Laura McKinney is listed as Consultant for Strategic Planning and Communications. The Washington Secretary of State’s website shows that Apple Mountain LLC, was registered as a corporation on September 8, 2014.

Prior to forming Apple Mountain LLC, Jim McKinney’s career history included his service as a Foreign Area Officer for the Department of Defense, serving in numerous US Embassies and in major US military commands in Europe, Asia and the Middle East, until retiring in 2013.

Currently, Laura McKinney is also the Director of Operations and Communications for the Whatcom Business Alliance (WBA) that was founded by former Whatcom County Council member, and GPT booster Tony Larson, in April 2012, right after SSA Marine/PIT had submitted its permit application to Whatcom County for the GPT project on March 19th. Some local Whatcom residents may remember that back in early 2011, when Larson was on the County Council, he had tried to put forth a Council resolution in support of the GPT project. That resolution was withdrawn soon after it had appeared on the Council’s agenda.

Larson, and Common Threads Northwest’s Jim McKinney, teamed-up recently on conservative talk radio host Dillon Honcoop’s The Morning Show on KGMI, on March 8th, when Larson guest-hosted the show. About half of that broadcast was devoted to discussing the Cherry Point Amendments, during which, Larson put forth the claim that there was an environmental group whose stated goal was to “deindustrialize” Cherry Point. No substantiation was provided for such a claim. Larson alleged that the “vehicle of choice” that particular environmental group was supposedly using, is “land use policy.” 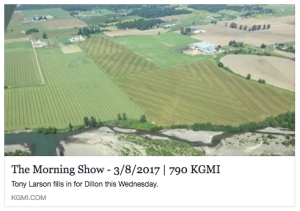 Click the graphic to access the March 8, 2017 podcast of The Morning Show on KGMI. WBA’s Tony Larson sat in for Dillon Honcoop and spoke with guest Jim McKinney of Common Threads Northwest.

McKinney jumped on the same bandwagon with Larson, purporting that there is an “attempt to shut out our largest and biggest most influential industries.” Telling listeners that he had learned from his experiences that took him to communist countries, and other places all around the world, McKinney said, “When a small group dictates the outcome for the rest of the population then it becomes very ugly for the people in that population.”

McKinney went on to accuse the County Council of attempting to constrict and restrict potential growth at Cherry Point, supposedly doing so, in order “to appease a very small and very powerful influential group of environmental activists.” He said, “these policies are actually approaching Draconian.”

Continuing his accusations about the Council, McKinney asserted that the Council is “making decisions based on special interests.” His messaging echoes the recent messaging from the Common Threads Northwest/Whatcom Tea Party and WBA devotee demographic that receives those groups’ newsletters, follows those groups on social media, and tunes-in to KGMI conservative talk radio.

Common Threads Northwest may also be familiar to some in Whatcom County as it was the entity that had filed a lawsuit in August 2015, against Whatcom County, in an effort to try to keep Prop 9 “Five Fair and Equal Districts” off the November 2015 ballot. In September 2015, a Superior Court judge, Michael Rickert, dismissed all the charges.

In the November 2, 2016, issue of Cascadia Weekly, editor Tim Johnson, in his Gristle column, wrote about the results of a year-long Public Disclosure Commission (PDC) investigation stemming from two complaints filed in late 2015 against Clear Ballot Choices. The PDC is authorized under Washington state law to shed light on dark money, and charged with investigating and enforcement of state election law violations. Turning up in that investigation, was Tony Larson’s direct and key involvement with the PAC and its primary funder, PIT, as that fact had eluded the public during the 2015 local elections. In his November 2, 2016, column, Johnson wrote:

“As detailed in the PDC complaint, an entity formed known as Clear Ballot Choices to ram home support for district-only voting while trying to shank five-district voting. Clear Ballot Choices was a political action committee formed by Pacific International Terminals LLC, the sponsor of the Gateway Pacific Terminal coal pier project proposed at Cherry Point. Through sly gerrymandering, ratfucking, PIT would lock in a Council favorable to the review of their coal pier…Clear Ballot Choices covertly employed Tony Larson, director of the Whatcom Business Alliance and publisher of Business Pulse. Tea Party Tony was elected to the Whatcom County Council in a 2010 special election; he was given the boot the following year…In short, with his detailed knowledge of County Council methods and procedures Larson ran the PIT’s extensive political ground game against representative democracy, but at no point was Larson ever publicly registered as an officer or responsible leader for the committee. He ran the game sub rosa.”

Johnson added, “These covert operations were not disputed in a negotiated settlement with PIT proposed by PDC enforcement officers last week. A suggested fine was imposed on Clear Ballot Choices, the maximum penalty based on the laws currently in place at the time of the violation.”

During the those 2015 Whatcom County elections, Common Threads Northwest had contributed $6,000 to the Dove Whatcom PAC. According to Washington state’s Public Disclosure Commission’s online filing records, and Dove Whatcom’s website, the Dove Whatcom PAC was created to support Prop 1 (district-only voting), and to support Props 2 and 3, mechanisms with which to potentially enable the locking-in of the district-only voting system indefinitely, while also opposing Props 9 (increasing Whatcom County from the then-three districts to five) and 10, during the 2015 election.

In looking at the issues which Common Threads Northwest has, so far, involved itself with, including funding a lawsuit against the County and a large monetary contribution to the 2015 Dove Whatcom PAC which supported district-only voting, it is not unreasonable to surmise that some of the dark money that has been donated to the entity known as Common Threads Northwest, has been donated by GPT applicant SSA Marine/PIT. Unfortunately, since Common Threads Northwest is not operating as a PAC, where there are laws that require the disclosure of funding sources, the public then has no idea what entity or entities are providing the bulk of the funding for the organization.

So, as the Whatcom Tea Party’s “Town Crier” stated in the March 12th email newsletter, “The tea party lives on, but with new names and new organizations.” Common Threads Northwest appears to be the present vessel for the reincarnation of the local Tea Party, albeit a seemingly more sophisticated, lower-profile, and well-funded, iteration.

8 thoughts on “A Tea Party by any other name / Noisy Waters Northwest, Sandy Robson”