From Wikipedia: “The Flathead Indian Reservation, located in western Montana on the Flathead River, is home to the Bitterroot Salish, Kootenai, and Pend d’Oreilles Tribes – also known as the Confederated Salish and Kootenai Tribes of the Flathead Nation. ” Click the graphic to access the Char-Koosta News article, “Commissioners target density map”

I am making this post to remind people that Elaine Willman, and others, some of whom live here in Whatcom and Skagit counties, are still out there right now, doing the racist work of trying to undermine and destroy tribal sovereignty and negate tribal treaty rights. END_OF_DOCUMENT_TOKEN_TO_BE_REPLACED 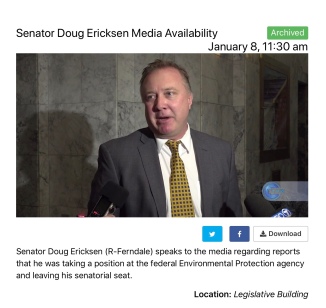 On January 6, 2018, Republican state Senator Douglas Ericksen found himself on the front page of The Bellingham Herald, and the subject of headlines in numerous other news publications later that day and over the weekend, for having been appointed to the position of senior adviser to the regional administrator in the Environmental Protection Agency’s Region 10 office, in Seattle, Washington. Ericksen tried to quash that news by saying the story was false, and by calling those press reports “erroneous.” Local reporter Kie Relyea, first broke the story on January 5, in the online version of The Bellingham Herald. END_OF_DOCUMENT_TOKEN_TO_BE_REPLACED

In the thick of Donald Trump’s first year as President, the U.S. labor movement scored an improbable victory.