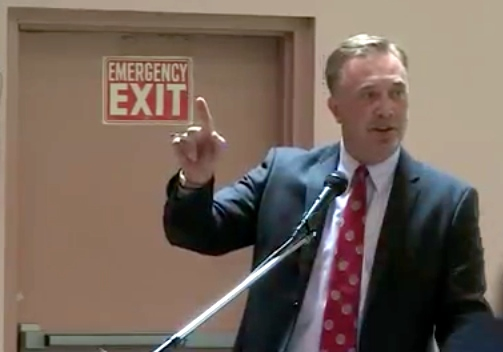 Using surplus funds for expenses related to obtaining and/or maintaining personal employment with the EPA would not be considered an appropriate use of those surplus funds. Cash Receipts and Expenditure reports filed with the PDC by Senator Ericksen’s “Douglas J. Ericksen (Committee to Elect Doug Ericksen Surplus Account)” indicate that in November 2017, there were listed expenses totaling over $1,300 for Washington D.C. travel-related expenses. The expenses appear to be related to Ericksen’s meeting/s with EPA and/or White House officials to discuss and procure potential personal employment with the EPA. This would not likely be considered a legitimate public office-related activity.

According to the PDC website, if an elected official were to incur a non-reimbursed public office-related expense that also, in any manner, could be considered personal in nature, the agency recommends paying the expenditure with personal funds, and then seeking reimbursement from a surplus funds account only for that specific portion that is directly related to his or her elected office. The complaint outlines how that does not appear to be the regular practice exercised by Senator Ericksen in utilizing his surplus account funds.

EPA email communications obtained through FOIA records indicate that Ericksen met with EPA and/or White House officials on or around November 14, 2017, and discussed potential employment with the EPA, which resulted in Ericksen receiving an offer for an appointed position as Senior Advisor for Public Engagement, to the Regional Administrator in the EPA’s Region 10 office in Seattle, Washington. According to a December 4, 2017, EPA email communication, Ericksen’s offered salary for the appointed position was $133,096 per year.

Email records further indicate that Ericksen was originally slated to start his appointment as early as December 4, 2017, contingent upon him receiving clearance from the Office of Personnel Management in time for that start date, which did not seem to have occurred in time. Email records show that Ericksen’s start date was then moved to December 18, 2017, and on that date, it was again pushed back, this time by Ericksen, to January 8, 2018. Eventually, on January 5, 2018, Ericksen sent an email to EPA Regional Administrator for the Region 10 office, letting him know that he would not be joining the EPA after all.

Referenced in the complaint, the review of Cash Receipts and Expenditure reports filed with the PDC by Senator Ericksen’s “Douglas J. Ericksen (Committee to Elect Doug Ericksen Surplus Account)” indicate that in the months of January, March, and May of 2017, there were listed expenses totaling over $2,500 for Washington D.C. travel-related expenses. The expenses appear to be related to the performance of Ericksen’s then-appointed Temporary Transitional Schedule C position as Senior Advisor at EPA Headquarters in Washington, D.C. That appointment was effective on January 21, 2017, and ended on May 20, 2017.

During that temporary 120-day appointment, Ericksen worked full-time hours in his EPA position which had an associated yearly salary of $161,900, while he simultaneously continued to serve as a state senator in the Washington state Legislature.

PDC Cash Receipts and Expenditure reports filed for Senator Ericksen’s surplus account for December and November in 2016, also show Washington, D.C. travel-related expenses which may have been associated with Ericksen’s upcoming (at that time) January 21, 2017, appointment with the EPA.

As a result from news media articles in April and May of 2017, about his use of surplus funds for travel to Washington, D.C., in 2017, Senator Ericksen claimed that he sometimes travels to Washington, D.C. to meet with legislators as part of his elected position as senator. The complainant, Robson, reviewed all of Senator Ericksen’s Cash Receipts and Expenditure reports filed with the PDC for the last six years; 2012, 2013, 2014, 2015, 2016, 2017, and 2018.

According to Robson’s review of those reports from last six years, there did not appear to be any listed expenditures from Senator Ericksen’s surplus account which indicate he traveled to Washington, D.C., any times other than in December 2016, January 2017, March 2017, May 2017, and November 2017, all of which, occurred during the same time he appeared to either be meeting with EPA and/or White House officials about potential employment with the EPA, or occurred during the time that he was employed with the EPA.

Robson calls on the PDC and/or the Attorney General of Washington state, to investigate Senator Ericksen’s surplus account spending for the months referenced in the complaint.

Links to copies of the full PDC complaint and to accompanying Exhibits A and B: