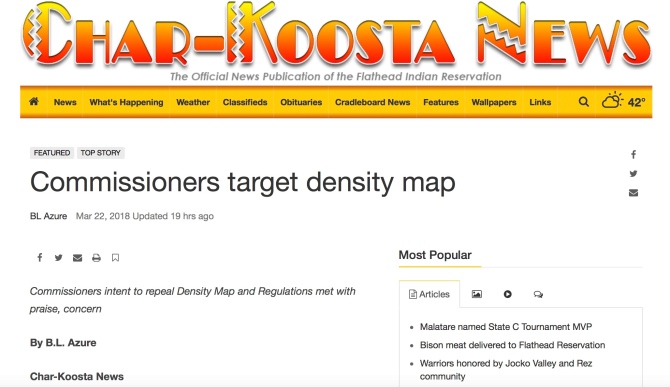 From Wikipedia: “The Flathead Indian Reservation, located in western Montana on the Flathead River, is home to the Bitterroot Salish, Kootenai, and Pend d’Oreilles Tribes – also known as the Confederated Salish and Kootenai Tribes of the Flathead Nation. ” Click the graphic to access the Char-Koosta News article, “Commissioners target density map”

I am making this post to remind people that Elaine Willman, and others, some of whom live here in Whatcom and Skagit counties, are still out there right now, doing the racist work of trying to undermine and destroy tribal sovereignty and negate tribal treaty rights. You may remember that Willman is listed as an executive board member for the anti-tribal treaty rights and anti-tribal sovereignty organization, Citizens Equal Rights Alliance (CERA) and has been a key presenter at CERA’s conferences over the years, including one held here in Whatcom County in 2013.  Willman came to Skagit County last year conducting, “what was billed as a ‘Workshop on Water & Property Rights: Resolving Conflicts With a Tribal Government,’ that was held in a banquet room at the Tequila Azteca restaurant, in the city of Sedro-Woolley,” according to a report written on July 8, 2017 by Sandy Robson about the event that was sponsored by the Skagit County Citizens Alliance for Property Rights (CAPR).

Willman had told radio show host Kris Halterman on the May 6, 2017, KGMI, Saturday Morning Live show that she (Willman) consults with government officials. Senior Deputy Prosecutor for Skagit County Will Honea, was present for a portion of Willman’s May 20 workshop, as was Washington State Representative John Koster (R-Arlington).

Last week, at a Lake County Commission meeting in Montana, which was reported on by the Char-Koosta News, the County Commissioners voted unanimously to pass a resolution stating an intent to repeal the Lake County Density Map and Regulations (DMR), which appears to be a set of regulations similar to Washington’s Growth Management Act or Whatcom County’s Comprehensive Plan. These regulations were specific to Lake County, and the purpose of the DMR, according to the March 22, 2018, article by B. L. Azure, is to “to lessen congestion in the streets; to secure from fire, panic, and other dangers; to promote public health and general welfare, to provide adequate light and air; to prevent the overcrowding of land; to avoid undue concentration of population; and to facilitate the adequate provision of transportation, water, sewerage, schools, parks and other public requirements.”

Azure’s article reported that Willman was present at that Commission meeting held in mid-March. Appeals were made to the County Commissioners from individuals from the Confederated Salish and Kootenai Tribes (CSKT), including one in letter form from their Natural Resources Department Wildlife program manager, Dale Becker, which was read to the commissioners. Becker’s letter explained that tribal land was drastically shrinking and that the Density Map and Regulations protect open space, clean air, and clean water. “This land is all the Tribes have left and they do want to purchase back that which was stolen from them,” Becker wrote.

Using her brand of anti-tribal-treaty alarmism, Willman disputed such claims, alleging that area residents have lost control of the water and land use decisions because of the CSKT. She went on to claim to the Commissioners, “You have no duty to the tribal government. Just do what’s right or you will be the third city to cease to exist,” asserting that both Bighorn and Glacier County Commissioners are being “run by tribal people.”

You can read B. L. Azure’s full article in the Char-Koosta News here.