According to the school’s principal, Ericksen contacted the school (it’s not clear if he meant the school district) and asked to have a panel with some Meridian High School students to talk about school safety and other issues such as gun violence and gun control. Forbes added that the timing was short notice.

Principal Forbes told me that he had announced at two different lunch periods that the senator was coming to the school to speak with students about school safety and gun violence, and asked for any students who were interested in participating to let the school know. He said there were approximately 20 students who participated in the meeting with Senator Ericksen. There is a total of 510 students who attend grades 9-12 at the high school. 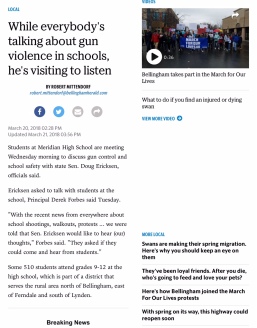 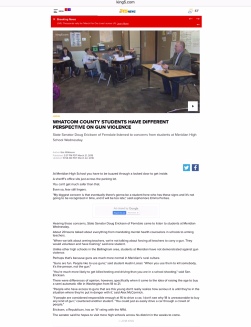 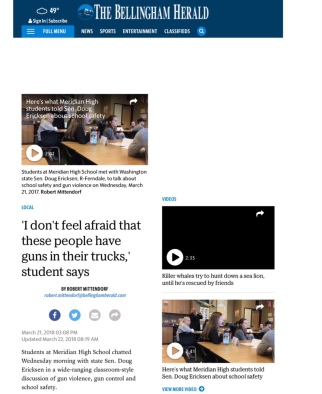 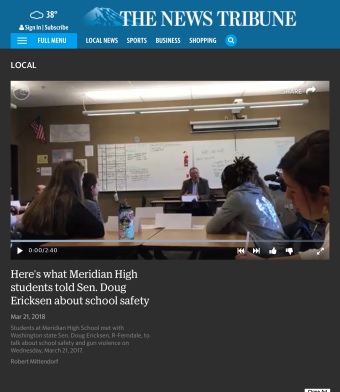 While Principal Forbes told me that he announced, during two lunch periods, the senator’s intent to meet with some students at Meridian High, he did not mention that about half of the 20 students who participated in the discussion with Senator Ericksen apparently had been hand-picked by teachers. A March 20, 2018, article published in the online version of The Bellingham Herald, reported that the senator would be visiting Meridian High students the next day, and that Principal Forbes said about half of those 20 students were recommended by teachers.

The Lynden Tribune also reported in its March 23, 2018, article that, “Some of the youths present volunteered to be involved while others were hand-picked by teachers for the classroom discussion on March 21.”

A March 21, 2018 article published in The Bellingham Herald about Senator Doug Ericksen’s visit with the small group of students at Meridian High School included a video recording (2:40 minutes in length). The article reported, in part:

“Several of the students said their peers sometimes bring firearms to school, locking them in their cars during school hours, because they go hunting after class.

“‘Around here, most kids in school have used a gun, whereas at a city school I would think … a whole lot of them haven’t physically used a gun,’ said student Kobe Koivisto.

“‘I don’t feel afraid that these people have guns in their trucks,’ she said.”

Forbes then said it was disturbing to read that part in the Herald article (where the reporter wrote that several students said their peers sometimes have firearms in their cars during school hours because they go hunting after class), and he said he was upset that the Herald did not contact him to follow up on that comment in the story. I told him that I was disturbed by the comment itself. Principal Forbes replied that he’s not sure if the students who had said that, were saying that from having actual knowledge of firearms in students’ cars, or if they were just thinking that might be the case.

The principal also told me he thinks that students who hunt would easily have time to go home first before they would go hunting and therefore would not need to bring their firearms with them in their vehicles. I thought that remark sounded somewhat defensive for him to have said, and it served to potentially downplay the idea that there could, in fact, be students who keep firearms in their vehicles in the school’s parking lot/s.

I asked Principal Forbes if the school was going to look into the report from The Bellingham Herald article that some students supposedly have firearms in their parked vehicles in the school parking lot. He said the school would be addressing that.

One other thing I wanted to ask, but forgot to ask Principal Forbes, was if there is any signage at the school’s parking lots providing notice to students parking their vehicles that firearms are not allowed in the vehicles. I think if there is not such signage, there should be.

King5 News published a March 21, 2018 article which included a video recording (1:41 minutes in length) of part of the meeting between Ericksen and the students.  Below is an excerpt from the King5 News article:

“Unlike other high schools in the Bellingham area, students at Meridian have not demonstrated against gun violence.

“Perhaps that’s because guns are much more normal in Meridian’s rural culture.

“’Guns are fun. People like to use guns,’ said student Austin Loisel. ‘When you use them to kill somebody, it’s the person, not the gun.’

“’You’re much more likely to get killed texting and driving than you are in a school shooting,’ said Sen. Ericksen.”

Both the comment from the student, and from Ericksen, bothered me. Those types of statements have been used by anti-gun control advocates attempting to minimize the reality that in the U.S., guns are being used to kill people and mass shooting incidents are becoming more frequent, such as what occurred on February 14, 2018, when 17 people were killed and others wounded, by a gunman at Marjory Stoneman Douglas High School in Parkland, Florida.

Also, it was troubling that another student who was featured in the King5 News video appeared to advocate for the age to legally purchase a gun to be 16 years old rather than 18 years old, or older. The article reported that particular student having said, “If people are considered responsible enough at 16 to drive a car, I don’t see why 18 is unreasonable to buy any kind of gun.” And, that same student added, “You could just as easily drive a car through a crowd of people.”

It seems like a false comparison to equate cars, which are designed for transportation, to guns, the predominant purpose of which, is to inflict damage to, injure, or kill living beings.

Toward the end of my March 22 phone call with Principal Forbes, I told him that I felt that Senator Ericksen orchestrated this meeting/discussion with a small group of students as a photo opportunity to garner publicity during what is an election year for the senator. I said I thought that to be especially the case, since Ericksen had obviously notified the press about his visit to the school because representatives from four various news media agencies were in attendance.

Principal Forbes remarked that recently a small group of students went to the State Capitol to meet Governor Jay Inslee during the school day, and, I believe he said they got to see the governor signing a bill into law. I said I felt that was a different type of situation than Ericksen’s visit to the high school.

Principal Forbes also told me that he has extended an open invitation to all three legislative representatives for the 42nd Legislative District if they would want to come to the school. He said that he thinks he remembers that Luanne Van Werven came to the school on one occasion, but he wasn’t sure.

I remarked to Principal Forbes that I thought the discussion between students and Senator Ericksen should have included the all of the students. He responded, saying that if there was a large group, then there would likely be just a few “loud voices” who would dominate the conversation. He added that it is likely that some students wouldn’t feel comfortable saying things in that kind of a setting. The principal also said if he were to have called for an assembly of all the students that they tend not to like giving up their time in the classroom with teachers for an assembly.

After watching the short videos and reading the articles published by news media about Senator Ericksen’s visit to Meridian High School, I think if he really wanted to listen to the students, he should not have invited the press to attend the event, and he should have asked the school to have all students assembled so that they could all hear each other’s comments. When students hear each other’s comments, that can even inspire some students who were not initially thinking of speaking, to participate once they heard something said, about which, they may want to comment. I know that happens to me when I hear other people share their thoughts at meetings and public meetings.

In watching the video packages published in The Bellingham Herald, King5 News, and The News Tribune, it felt awkward to see members of the press within only 1 to 5 feet of students while they spoke. It was distracting to the discussion, at least as a viewer. To me, having that discussion with only a very small number of students rather than the entire school is not ideal, and to have the press filming parts of that discussion for publication seems intrusive, and seems like it could keep some students from fully expressing themselves. It also could, after publication, potentially cause them to wish they hadn’t expressed certain things, or expressed things in certain ways that they did. 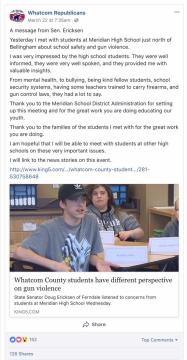 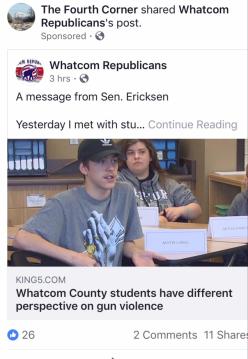 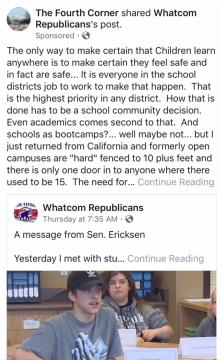 Local people not only received that sponsored ad in their Facebook feeds on March 22, but also on Saturday, March 24, people received another sponsored Facebook ad from The Fourth Corner Facebook page, sharing the same Whatcom Republicans Facebook page post about Ericksen, although this time the text written by The Fourth Corner above the shared post was different. The Whatcom Republicans Facebook page’s post now has 132 “Shares,” and has 113 comments posted underneath it as of today’s publication of this article.

It should be noted that according to Washington State Public Disclosure Commission online records, Charlie Crabtree is a paid consultant for Ericksen’s senate campaign. Senator Ericksen had announced during a January 8, 2018 press conference he held in Olympia, Washington, that he is running for re-election to the state senate this year. 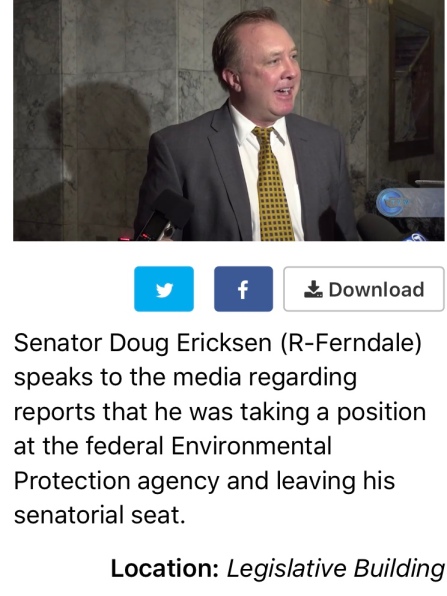