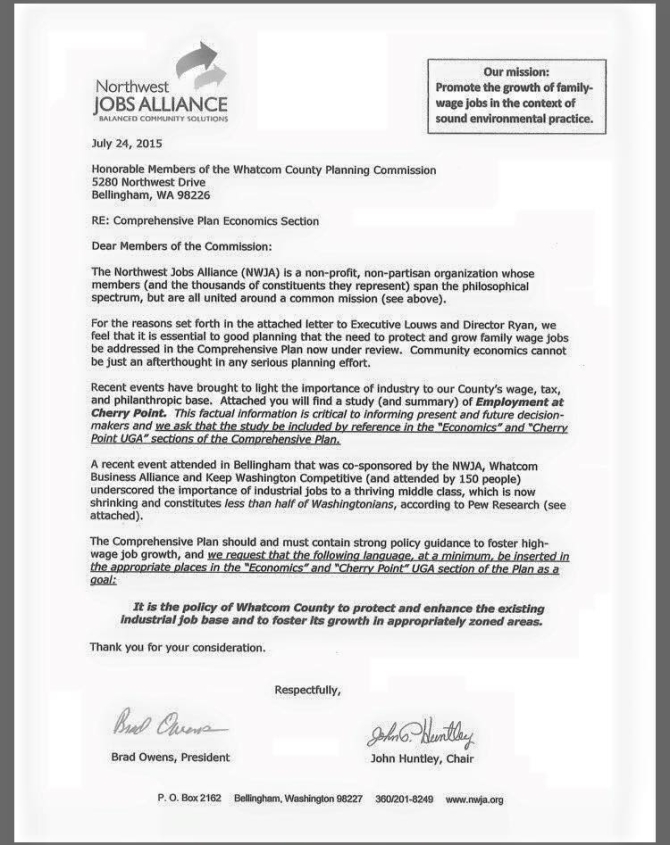 The NWJA stated in its July 24, 2015 letter to the Whatcom County Planning Commission that the group’s mission is to “Promote the growth of family-wage jobs in the context of sound environmental practice.”

Since its inception in 2011, and until the fall of 2014, the Northwest Jobs Alliance’s mission had also included this sentence that had originally published on its Facebook page in the “About” section:

“The Alliance focuses their efforts on supporting the Gateway Pacific Terminal—one of the largest industries to ever enter Whatcom County.”

Also, up until September 2014, the phone number listed on NWJA’s Facebook page had been a non-working phone number, and the website listed on its Facebook page had been www.gatewaypacificterminal.com, which is the official website for the GPT project. Only in the last 10 months or so did NWJA start to have a website presence other than the website for GPT.

I think it is misrepresentative for John Huntley and Brad Owens who are the current “faces” of the NWJA, to write this letter when the reality is that the NWJA is powered and driven by SSA Marine/Gateway Pacific Terminal.

If such a letter is to be submitted by the Northwest Jobs Alliance, then SSA Marine should be signing such a letter.