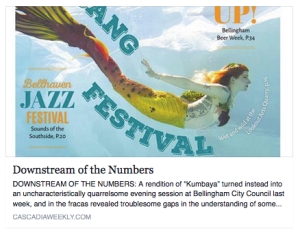 The Gristle recounts an explosive and confrontational city council meeting last week. I do not think there was any attempt by council to reconcile the planning commission recommendations with public opinion.

Rather, it is clear the council is in the development’s pocket. Get ready for a rocky ride over the next 4 years because things will only get worse with Jack’s departure and the arrival of another pro-development council member (who is already meeting with members of the development community to discuss at least one large project.)

The condescending arrogance of Murphy and Vargas was appalling. They declared that they cared not for evidence or opinion. They knew what was right and no one was going to convince them otherwise. Murphy sneeringly condemned the public for whining when they did not get their way, a fact made amusing earlier that evening when they themselves whined to Executive Louws about how they were ignored and did not feel respected or heard regarding the jail issue. Knudsen surely scared away citizens that planned to come forward and voice similar complaints about the planning commission. Discouraging public input is reprehensible.

I heard intelligent, well researched data and argument presented by citizens before the planning commission, and the commission could not wait for public comment to be over so they could go back to doing what they wanted to without interruption. And a large portion of the citizens advocated no growth, not mid range figures. The mid range figures were the recommendation of the planning department.

Read “Downstream of the Numbers” in this week’s edition of The Gristle on Cascadia Weekly here.

Contact the Bellingham City Council with your comments about development, Urban Growth Area issues, attitudes and practices regarding public comment and public input, and other concerns by way of the contact information below.