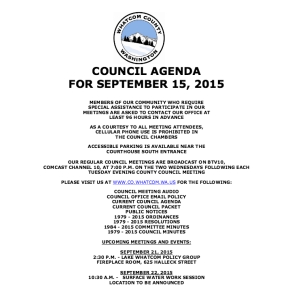 Last night the COB approved a financial deal [regarding the proposed Whatcom County Jail plan] to take to the Whatcom County Council tonight if the Mayor can get it on the agenda.

Ironically, again, no one will know if it is going there tonight until you show up – for it is not posted anywhere. They talked about it last night, but it is not yet on the agenda – so it will be a sneak play that the public has no time to respond to.

It feels like this big tax bond issue has has nothing to do with the public, for it was approved last night without any more major discussion. The Chair is truly on the “fast track” to make Jack happy so the jail bailout/sales tax people can claim victory to have all seven cities in the county in agreement – and they won’t be blamed for holding up the sales tax approval.

To me it is a bullying business model for how this is being done. The COB was put into a no-win situation. Any agreement they write essentially creates implied consent regardless of what the city put in the agreement. And even though they wrote in limitations, by agreeing to a Ferndale location and a 450 bed jail in the first phase – they just approved the whole deal that the Executive and the Sheriff brought forward. It is indirect, but true anyway.

In the publics eyes this will come across as an approval of the jail build, and an endorsement of the sales tax. And there still has been no bonafide Needs Assessment, no justification for a new jail. In fact, the fact show that this jail build is contraindicated.

Talk about bad business management. There is still no Market analysis, no transparent review, no discussion of taxpayers concerns about the jail build, no discussion of impacts of changing jurisdictions, about the additional costs of mitigation, of doubling the Sheriff’s office… It has all been about financing and money…not about the facts.

In sales and marketing, this is called an presumptive close, or in other circles it was all a red herring to distract people from the real game – an economic takeover of taxes.

And our mayors and councillors whether they understand or not, are complicit by association by engaging the conversation and approving a financial deal even without a valid plan.

If anyone can go to the Whatcom County Council meeting tonight, that is where you need to testify against the County Council accepting this agreement as implied consent to a jail industry takeover of our taxpayers money.

Whatcom County Council meetings are held every other Tuesday evening, and there is one tonight, September 15, 2015 at 7 p.m. in the Council Chambers at 311 Grand Ave., Bellingham, WA.  Click the link to view the “2015 Agendas, Action Taken, Minutes and Audio” page.  Select the most recent agendas to view upcoming meeting information and dates.