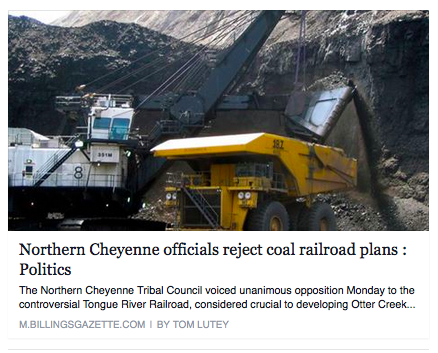 The Northern Cheyenne Tribal Council today voted 9-0 to oppose the controversial Tongue River Railroad, which is critical to developing the proposed Otter Creek coal mine in southeast Montana.

The Council cited concerns about damage to tribal culture and the environment. The $403 million railroad is proposed by BNSF, Arch Coal, and candy bar magnate Forrest Mars, who owns a ranch in the area. If permitted and built, the railroad would open southeast Montana to large-scale coal surface mining for potential export to Asia. The proposed Gateway Pacific coal terminal at Cherry Point would be a likely potential conduit for shipping the coal that would be mined from the proposed Otter Creek Mine in Montana, that would then be transported via the proposed Tongue River Railroad to GPT for export to Asia.

Back in March, after seeing a March 12 article in our local Bellingham Herald which basically regurgitated a press release sent to the paper from Count On Coal Montana spokesman, pr flak Chuck Denowh, and then reading the op-ed from Northern Cheyenne Tribe member Jason Small linked-to in the Herald article, I decided to contact Mr. Small (back on March 23). Link to Herald article: http://www.bellinghamherald.com/…/local/article22281045.html

I explained to Mr. Small that I am a freelance writer and I wanted to get clarification from him regarding his recent interview relating to Gateway Pacific Terminal, on the March 12, KGMI talk radio show, “The Morning Show,” hosted by Dillon Honcoop, and relating to Mr. Small’s March 10, 2015 op-ed published in The Montana Standard. In his pro-coal op-ed, he voiced his opposition to the proposed EPA implementation of the new Clean Power Plan and suggested the EPA reconsider the Clean Power Plan with the Northern Cheyenne’s economy in mind.

I read Mr. Small the text from the introduction above the podcast of Dillon Honcoop’s March 12 radio show featuring Mr. Small’s interview which read:
“Northern Cheyenne tribal member Jason Small joins Dillon to explain why his tribe and the larger nearby Crow Nation support plans to build the Gateway Pacific Terminal here in Whatcom County.”

I asked Mr. Small to clarify for me in terms of his March 12 interview on KGMI’s radio show, and in his March 10 op-ed he wrote that was published in the Montana Standard newspaper, if was he speaking on his own behalf, or if he was speaking in any way officially for the Northern Cheyenne Tribe.

Mr. Small said, “No, no, okay, yeah that’s the point I’ve been trying to make with everybody else. I said–we [Northern Cheyenne Tribe] have not passed a referendum vote for any development at this time.”

Mr. Small also said: “We’re just getting to the point now where development is becoming an issue again and I might have been a proponent of that, so I don’t want to give you the sense that I’m speaking for absolutely everyone.” Mr. Small added, “The key thing is there is no official stance at this time.”

While Mr. Small said he doesn’t want to give the sense that he is “speaking for absolutely everyone,” he does not, however, bother to clarify that he does not speak for the Northern Cheyenne Tribe when he speaks publicly in support of the Gateway Pacific Terminal, or when he speaks in opposition to the new EPA regulations. In October 2014, Small traveled to Whatcom County with pro-coal/pro-GPT Montana Senator Steve Daines, as part of a Montana contingent that toured the proposed Cherry Point terminal site. Small voiced his support for the GPT project in a press release regarding the trip. The press release identified him as a member of the Northern Cheyenne Tribe, and quoted Small having said, “Montana’s coal resources provide critical income opportunities for the Northern Cheyenne and all Montanans through jobs, taxes, and affiliated industries. This terminal will help keep our coal industry thriving, and that’s a good thing for families.”

Small was also invited by Senator Steve Daines to testify at the April 8, 2015 Senate Field Hearing,” Empowering Indian Country through Coal Jobs & Self Determination,” held at Crow Agency, MT., where he testified in opposition to the new EPA regulations.