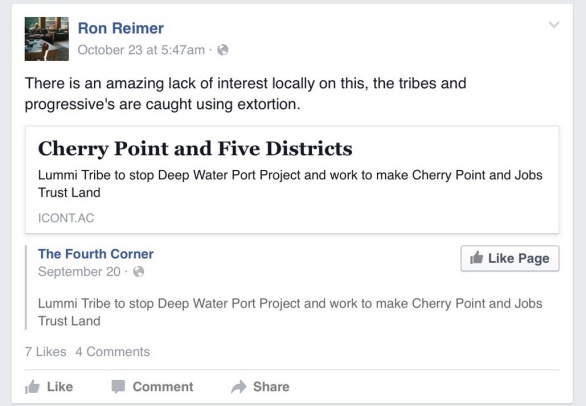 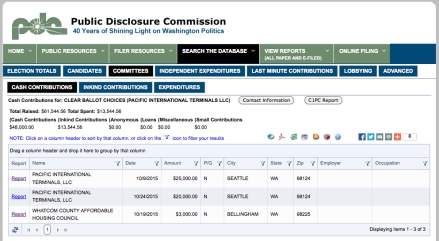 PIT, so far, has dumped $58,545 into its PAC aimed at getting Prop 1 district-only voting approved, which will dilute Bellingham voters’ voices, rendering thousands of them mute to a large degree in electing County Council members, and getting Props 2 and 3 approved which strive to keep that election system in place for as long as possible. This PAC also is focused on opposing Prop 9 “Five Fair and Equal Districts.”

Apparently, coal terminal applicant Pacific International Terminals (subsidiary of SSA Marine) is trying to buy its way toward a permit approval for its coal export terminal by way of Whatcom County’s elections. Coal terminal interests were not successful, after spending over $149,000 in the 2013 election, in getting their preferred conservative candidates voted onto the County Council who were thought most likely to approve the permit needed for the GPT project. So, this back door path, via amending Whatcom County’s Charter with Charter Review Commission-generated Props 1, 2, and 3, affords GPT interests another avenue to attain their goal of stacking the County Council toward a favorable GPT permit decision, by getting voters to approve district only voting.

So far, during this election, PIT has also dumped over $37,000 into the Whatcom County Republican Party (WCRP) PAC which is funneling funds into the two conservative candidates for County Council, Kathy Kershner and Bruce Ayers; to Gary Jensen who is running for a seat on the Port of Bellingham Commission; and to the DOVE Whatcom PAC, headed up by Whatcom Tea Party leader Karl Uppiano. According to its June 25, 2015 PDC registration form, DOVE Whatcom is focused on supporting district-only voting (Prop 1). However, DOVE Whatcom has been additionally supporting Props 2, and 3, and it has been opposing Prop 9, “Five Fair and Equal Districts”.

Charlie Crabtree is the Chair of the WCRP PAC. He authors a conservative blog called The Fourth Corner. A September 20, 2015, Fourth Corner Facebook post linked to an email marketing piece he authored in which he portrayed the Lummi Nation’s exertion of its treaty rights relating to PIT’s Cherry Point coal export terminal in a negative light. He also tried to link Prop 9 to his negatively painted portrayal.

A particularly unsavory line aimed at the Lummi Nation in Crabtree’s piece, was a header which read: “This is not about little fish or native artifacts.”

NWJA sent an August 20, 2015 letter to the U.S. Army Corps of Engineers. The idea advanced by NWJA in its letter, was that there is “an apparent motive behind the Lummi Nation’s opposition to the Gateway Pacific Terminal project (and completion of the EIS process) not connected with treaty rights.” [italicized emphasis theirs]

Now, following both the NWJA’s letter to the Army Corps, and WCRP PAC Chair Charlie Crabtree’s Fourth Corner email marketing piece, we learn that the last minute Clear Ballot Choices PAC formed by PIT is led by Lynden resident and property rights zealot, Ron Reimer. He is listed as the Chair and Campaign Manager on the PAC’s registration form. 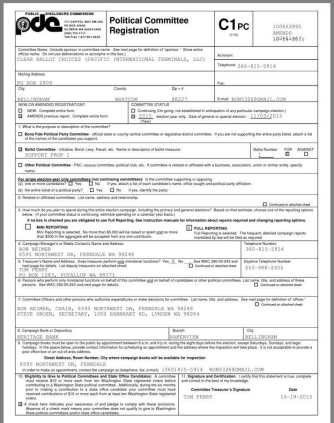 Some coal terminal proponents continue to give lip service to respecting the Lummi Nation, even as they are simultaneously taking actions that could serve to diminish or abrogate Lummi treaty rights.  Besides these past contradictory actions by some of its advocates its paid consultant Craig Cole, if Pacific International Terminal’s proclamations of respect for the Lummi were true, why was Ron Reimer selected to lead this PAC formed by terminal applicant, PIT?

Ron Reimer has made numerous derogatory remarks about the Lummi Nation and their tribal treaty rights in his postings on social media and comments he posted online in articles published by The Bellingham Herald.

The Lummi Nation’s opposition to the Gateway Pacific coal terminal and its Nation’s exercising of its treaty rights in January of this year, continues to be a major obstacle for PIT in its quest for a coal export terminal at Xwe’chi’eXen (Cherry Point). Community members and organizations in Whatcom County have rallied to stand with the Lummi Nation as it defends its treaty rights, and that solidarity has withstood a public relations campaign by PIT/SSA Marine’s advocacy group NWJA, aimed at questioning the validity and motivation of the Lummi Nation in having asserted its treaty rights.

Below are some screenshot photos of Facebook posts and comments made by Ron Reimer, and some comments he posted on articles in the online Bellingham Herald over the last several years, relating to the Lummi Nation and/or tribal-related issues. 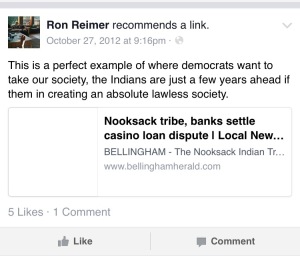 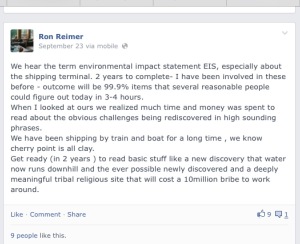 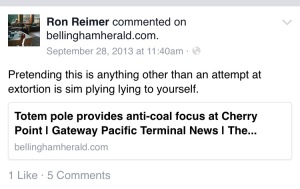 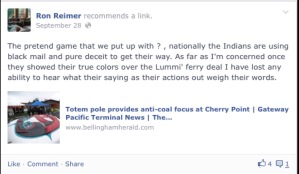 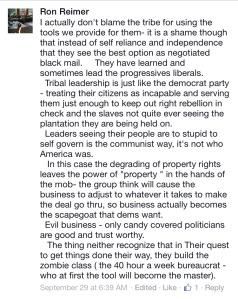 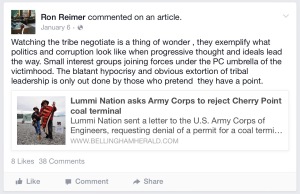 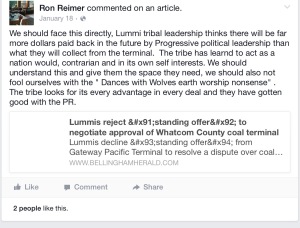 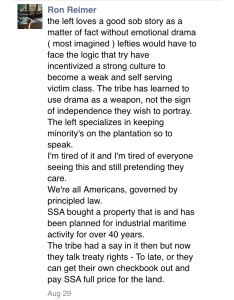 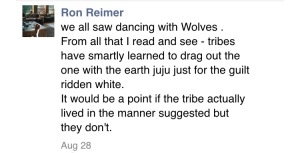 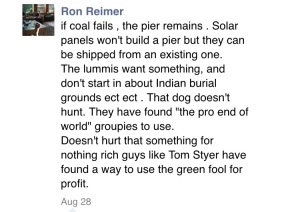 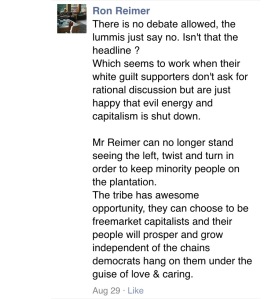 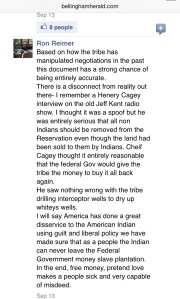 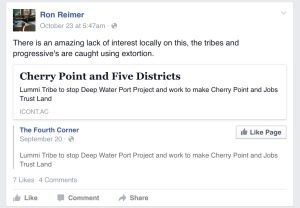 In summary, here is what this looks like all put together:

-Gateway Pacific Terminal advocacy group NWJA sent an August 20, 2015 letter to the U.S. Army Corps, in which NWJA defamed Lummi Nation, and asked the Army Corps to take action that would serve to diminish or abrogate Lummi treaty rights. NWJA also sent out publicity about that letter.

-PIT formed a last minute PAC to support Charter Review Commission-generated Props 1, 2, and 3, and to oppose citizen-proposed Prop 9 placed on the November election ballot, via ordinance, by the Whatcom County Council

-Clear Ballot Choices (Pacific International Terminals, LLC) PAC selected a local property rights crusader as its Chair and Campaign Manager, who is known for repeatedly and publicly casting aspersions on the Lummi Nation

It leaves one to wonder if there is any way those who are now blatantly wielding toxic industry funds and bad judgement, can possibly win over the voting public to a project that carries the potential to be the demise of treasured territory in Whatcom County, Washington.