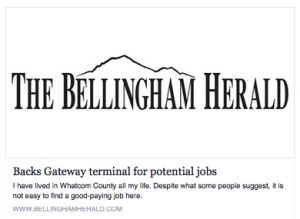 The author of this letter to the editor [in this week’s Bellingham Herald] is Debra Scott.

I am not sure if this is the same Debra Scott, who according to LinkedIn, worked for SSA Marine consultant Craig Cole at his company, The Markets LLC, from 1993 until May 2014.

In reading her GPT support letter here, it’s interesting to see that now, right after the jail tax Prop 2015-1 was just defeated in the election, she brought out the concept of the “tax money we need to pay for things like a new jail” that would supposedly be generated by GPT.

That messaging reminded me of when I heard SSA Marine consultant Craig Cole
as a featured guest on a KGMI talk radio show, aired on March 29, 2014, a little over a month after the Ferndale school bond was defeated in the February 2014 Ferndale special election.

“The Ferndale School District which recently saw a levy go down, a bond issue go down in flames, about 30 percent only were favorable. The Ferndale School District would increase its capacity by about $1.4 million dollars [the $1.4M Cole is referring to is the estimate of yearly tax monies paid by GPT]. What that means is by not raising, uh, if it does not want to raise its levy rate, it makes everybody else’s property taxes go down. The flip side of that is that in the future if another bond issue is proposed, the Gateway Pacific Terminal project is gonna contribute about $1.4 million in tax capacity to the Ferndale School District each and every year. So what that does is it takes the tax load off the other taxpayers.”

Letter-writer Debra Scott seems to have taken a page right out of the GPT playbook when she threw in the part about tax money that could come from GPT that she says is needed for paying for a new jail.

And, Ms. Scott seems to have taken a page out of the GPT playbook when she wrote:
“Whatcom County decided to place the heavy industry companies, like the refineries, at Cherry Point, and has set aside a spot for one more industry.”

This quoted statement above by Ms. Scott, echoed a statement made by Craig Cole in a June 5, 2010 Bellingham Herald article that announced the draft version of the management plan for the Cherry Point Aquatic Reserve. In referring to Cherry Point in that article, Cole had said:

“That’s the area we’ve set aside for heavy industry…”

I always recommend that people consider the source when reading opinion pieces. In the spirit of full disclosure here, I am dead-set against the Gateway Pacific Coal Terminal.