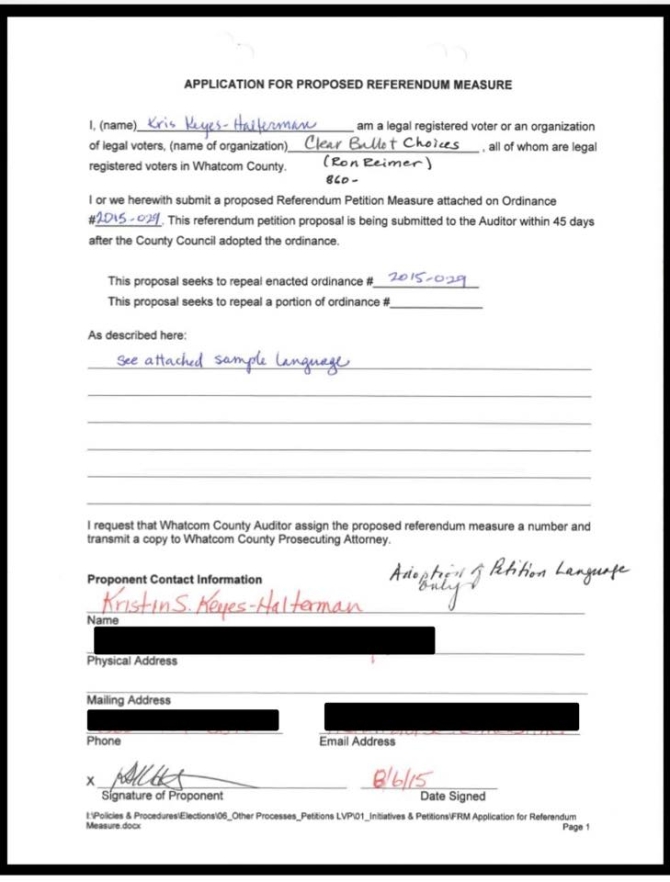 Whatcom Tea Party board member Kris Halterman is the listed contact person (along with Lynden resident, Ron Reimer’s name) for “Clear Ballot Choices” the group behind the 2016 referendum petition seeking to repeal enacted Ordinance 2015-029. Ordinance 2015-029 had been approved by the Whatcom County Council on July 7, 2015, which directed the County Council to place what is known as the “Five Fair and Equal Districts” Charter amendment as Proposition 9, onto the November 3, 2015 general election ballot. Whatcom voters approved Prop 9 on November 3.

According to a PDC Political Committee Registration C1pc form filed on October 13, 2015, “Clear Ballot Choices” was also the name of a last minute Ballot Committee, and its stated purpose listed on the C1pc form was to “Repeal Ordinance to Amend County Charter.” The listed Committee Officers are Ron Reimer and Steve Groen, and Reimer is also listed as Campaign Manager. (photo attached)

An October 19, 2015 email from “Clear Ballot Choices (Pacific International Terminals LLC)” Treasurer Tom Perry, sent to the PDC, showed that the Ballot Committee also revised its C1pc to state that it was supporting Prop 1 and also opposing Prop 9. Tom Perry, stated in the Oct. 19 email that “due to electronic filing limitations,” they were unable to include the fact that they “were both supporting and opposing ballot measures.” (Photo attached) 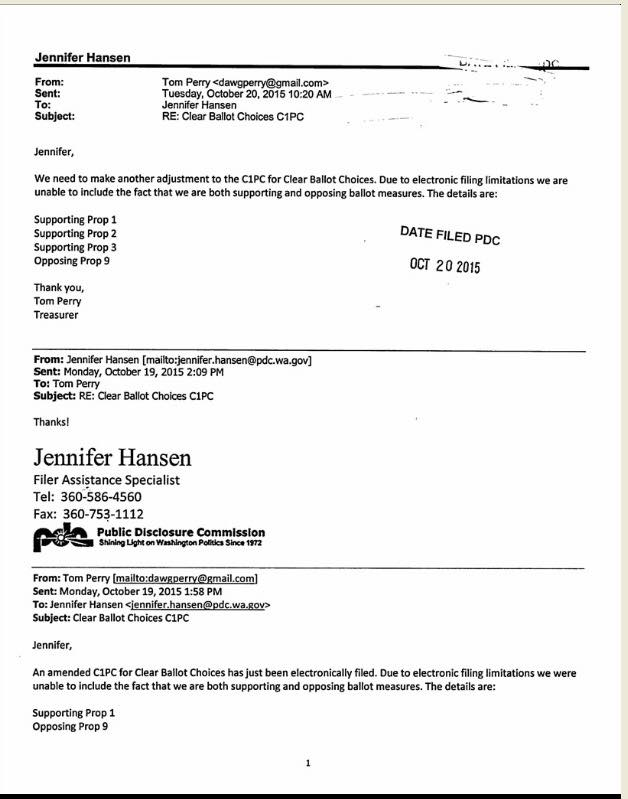 Then an October 20, 2015 email from “Clear Ballot Choices (Pacific International Terminals LLC)” Treasurer Tom Perry, sent to the PDC, showed that the Ballot Committee, once again, needed to revise its C1pc form to show that it was supporting Props 1, 2, and 3, and opposing Prop 9. (Photo attached) 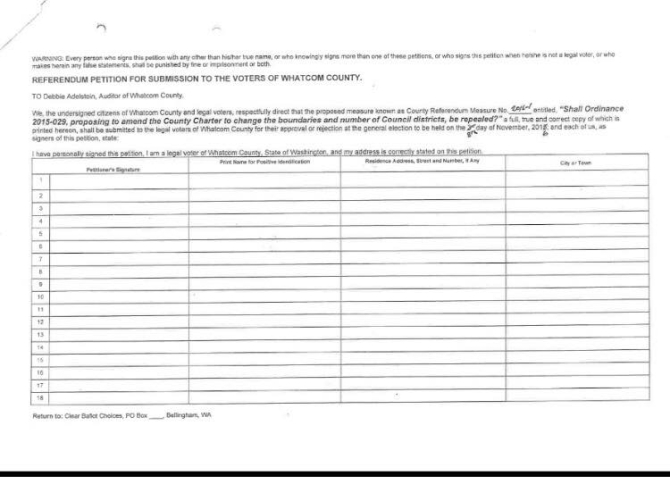 So, was it considered “organizing” for what would become the Political Ballot Committee “Clear Ballot Choices” when “Clear Ballot Choices” (and Kris Halterman along with Ron Reimer) filed its referendum petition on August 6, 2015 with the Whatcom County Auditor? And, what about the prior “organizing” that would have been necessary to obtain those 50 or so signatures that were included in the referendum petition paperwork? (photo attached of the first page of signature names)

According to PDC rules, a Political Committee must register with the PDC:

Clear Ballot Choices did not register as a Political Ballot Committee until October 13, 2015.

It appears *clear* from “Clear Ballot Choices” having filed its August 6, 2015 referendum petition, and having funded its Political Ballot Committee, that Pacific International Terminals/GPT is willing to tamper with our County election system, in an effort to try and get the County Council make-up it desires—and that Council make-up could greatly increase its chances for an approval by County Council for the permit PIT/GPT needs for the coal terminal.