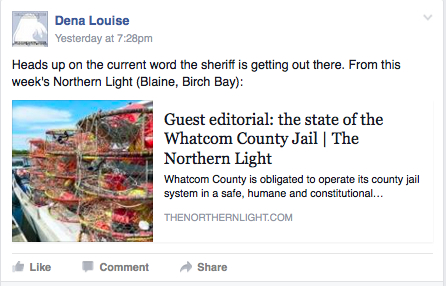 The problem is that most of this is political lobbying and half-truths. The Sheriff consistently shifts the blame of mismanagement to others, and the guilt of overcrowding to the state or to his powerlessness to change anything.

The 1st problem with his arguments is that in spite of spending over $3 million in planning to build the jail – they skipped the first step: They never produced a valid Needs Assessment that justified the demand.

The 2nd problem with these arguments is that the taxpayers already bought a forever jail tax once and then also bought the forever mental health tax once – for a total of .2% sales tax every year – forever! Right now, that means county officials are collecting roughly $7 million a year to fund a new jail and new facilities anyway – yet the money was not spent as taxpayers expected. You know the story, “fool me once, fool me twice…”

The 3rd problem is that the Sheriff is not taking accountability for the overcrowding in spite of testimony by other professionals showing how our county could safely and responsibly reduce overcrowding.

For example, three different times by three completely different and high quality professionals…it has been clearly stated to the Incarceration Prevention & Reduction Task Force in open public meetings that the Sheriff and the Prosecutor have the power to reduce the overcrowding in that jail, and they can do it in a way that is beneficial and cost-saving to the community. Yet the solutions have been ignored and brushed aside. Why?

Link to Sheriff Elfo’s editorial in The Northern Light: http://www.thenorthernlight.com/2016/02/03/guest-editorial-the-state-of-the-whatcom-county-jail/