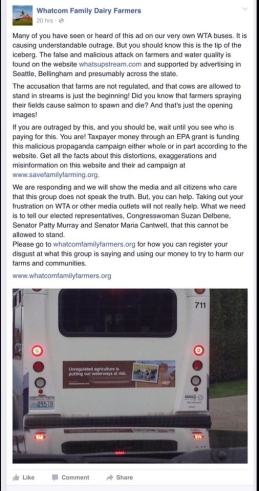 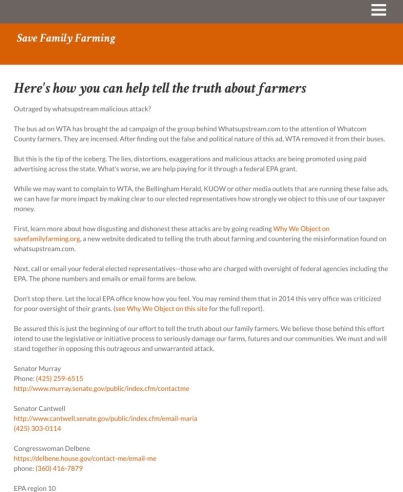 “Whatcom Family Dairy Farmers” Facebook page and website were created shortly after the April 2015, E. coli outbreak at a Milk Makers Fest event, by local public relations guru, Gerald Baron. Baron is paid for disseminating information, which is primarily propaganda, for local farmers in an attempt to dispel the growing awareness of the urgent need for effective regulations in farming and ranching. While disseminating that information, Baron/Whatcom Family Dairy Farmers tries to discredit groups or individuals who dare to speak or write publicly about the need for those effective regulations and/or about the current pollution problems in Whatcom from some farming and/or ranching practices.

Baron’s latest mission on behalf of his employers, was to go after “What’s Upstream” for an ad displayed on the back of one or more Whatcom Transportation Authority (WTA) buses. Whatcom Family Dairy Farmers went on the attack against the “What’s Upstream” group which is comprised of the Swinomish Tribal Indian Community, the Center for Environmental Law and Policy, Puget Soundkeeper Alliance, and the Western Environmental Law Center. The project was funded wholly or in part by the U.S. Environmental Protection Agency under an assistance agreement to the Northwest Indian Fisheries Commission.

Gerald Baron/”Whatcom Family Dairy Farmers” made multiple posts on social media calling the What’s Upstream ads, “lies,” and “distortions,” and “exaggerations,” and “false,” and “malicious attacks.” After reviewing the information on the What’s Upstream website, Baron’s/Whatcom Family Dairy Farmers’ claims are not substantiated.

According to a March 6 post that was displayed on Whatcom Family Dairy Farmers’ Facebook page, readers of the post could “Get all the facts about this distortions, exaggerations and misinformation on this website [Whatsupstream.com] and their ad campaign at www.savefamilyfarming.org.”

No surprise as to where readers were being directed as the “Save Family Farming” website was also created by Gerald Baron, and the site is filled with more propaganda and accusations against the What’s Upstream project and its partners. The entire website appears to be the focused solely on “What’s Upstream.”

I think local farmers should stop fighting the need and demand for effective regulations, and stop denying that there are any pollution problems, and instead of paying their hard-earned dollars to pr people like Gerald Baron, use that money toward needed upgrades and modifications to their farms such as putting double-lined synthetic manure lagoons instead of soil or clay-lined manure lagoons which is the presently-allowed low level of protection by the USDA. “Save Family Farming” calls soil or clay-lined manure lagoons adequate. If they truly cared about the public’s health they would ensure the protection of our waterways.

Baron, his clients, and their supporters, are bullying and trying to intimidate people who have real concerns about the inadequate protection of water sources in our county, who speak up about those concerns. It’s important to keep speaking up and letting our county, state and federal representatives know that Whatcom County residents need and desire better protection of our water from any farming or ranching operations which are causing pollution to those waters by their activities.

“After finding out the false and political nature of this ad, WTA removed it from their buses.”

That is not correct and it is misleading. I know because I spoke to the WTA Public Information Officer, Maureen, on March 7, and she told me the same information provided by WTA in their written statement copied and pasted below. She made no reference in my call with her that the “What’s Upstream” advertisement was in any way false. She simply explained because the ad is considered to be an issue of public debate their policy is not to run those ads and it mistakenly had been displayed, and that they were removing it.
The written statement from WTA is:

“At Whatcom Transportation Authority (WTA), our policy is to prohibit advertisements that ‘express or advocate an opinion, position or viewpoint on matters of public debate.’ For a few days in early March, we displayed some advertisements that violated our own policy. Though we were able to get them removed soon after we learned about them, we apologize that they appeared on our buses at all.”

I understand that Gerald Baron is paid to advocate on behalf of dairy farmers in Whatcom County. But, I think when he does advocate, that he should not incorrectly attribute a statement or position to the WTA that their authority did not, in fact, make.

I posted a post this evening to the Whatcom Family Dairy Farmers’ Facebook page asking them to immediately revise the incorrect and misleading statement that I pointed out above which was incorrectly attributed to the WTA that is published on the “Save Family Farming” webpage.

Check out Whatsupstream.com to see for yourself that the information on that website is informative and important for us to know.