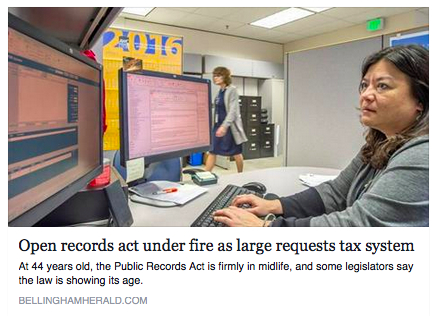 There are few laws as important for Washington residents as the Public Records Act and the Open Public Meetings Act and yet, they are under constant pressure from cities and counties who wish to minimize the public’s access to information.You do not respond to a few alleged abusers by reducing access to information for everyone.

I fail to understand why most record requests should be such a resource drain. Emails can be pulled up by a word search, and documents should be easy to pull based on established files and filing procedures.

The truth about records requests is that they are often more work for the requester, because you have to read through all of the responses, many of which are not relevant, or are duplicated many times, and then you need to go back to the city or county, often many times, to follow up on the inevitable records that were not included, such as attachments that were not attached, references you find to other relevant documents that are not included, relevant information you obtained from another source that should have been included but was not,etc. ,

And then there are things that, at least in Whatcom County, are routinely withheld from a records request to which the public is entitled, including an exemption log. Unless you specifically ask for it, the County will not tell you if it is withholding records from your request based on an alleged public records exemption, or disclose basic information regarding the withheld record, including dates, involved parties, topic of the record, the specific exemption being claimed and the basis for the exemption. The county need not disclose the document, but it needs to disclose enough information for the requester to determine whether the claimed exemption is legitimate or whether it needs to be challenged.

In my experience, the process can be as exhausting for the requester, and as much of a resource sink, as for the jurisdiction. And in case anyone has not noticed, the city and county have new websites make it more difficult to find information, particularly older information. I do not know if this is a result of needing the system to function better, but it might increase the need to make records requests.

Another trick that is still being used is the attempt to charge the requester for the price of making copies, which discourages requests. Ask for electronic copies in the original format, preferably by email. If the volume of records is too high, and they want to charge you for a CD disk, tell them you will provide your own CD to copy, or bring them a memory stick. You should not have to pay money to obtain records that were submitted in electronic format, which is almost all records today.

My advice: if you only need one or two records, just ask for them from the appropriate employee or department. If they are documents subject to disclosure, the employee will often provide them to you. Anything more should be requested through a public records request. Try to help the county or city and yourself by restricting the dates, departments, and nature of information that is sought as much as possible and be as specific as possible. In the end, it will save everyone time and energy.