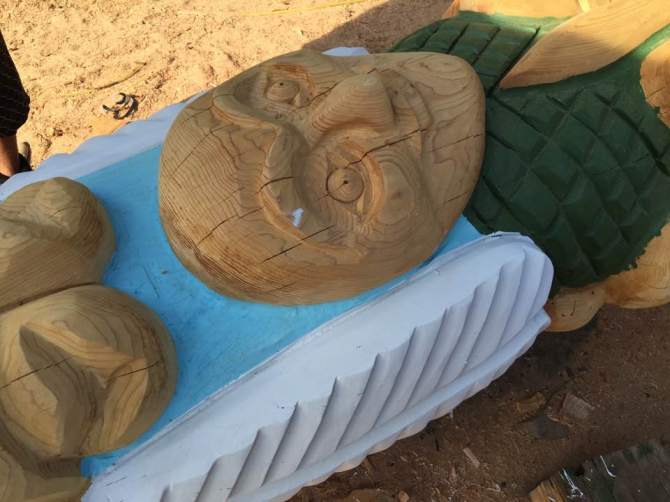 Bellingham (WA) On August 23 the House of Tears Carvers of the Lummi Nation will begin a 5,000-mile trip across the western United States and Canada with a 22-foot long totem pole to bring attention to proposed fossil fuel terminals, oil trains, coal trains, and oil pipelines and the threat they pose to tribes and local communities.

The journey follows the May 9, 2016 decision of the Corps of Engineers to deny the permit for the proposed Gateway Pacific Terminal coal terminal at Cherry Point based on its potential impacts on the treaty fishing rights of the Lummi Nation. The new, and just as significant, threat to the Lummi and other tribes is the dramatic increase in fossil fuels from the Bakken oil fields in the United States and the Alberta tar sands oil fields. If the proposed expansions are approved it could mean up to a tenfold increase in fossil fuel exports from Washington State and British Columbia. It would also mean a significant increase in oil trains and additional tanker traffic in the Salish Sea. The transport, storage, and eventual shipment to China of these products would create a major threat to environmental and community health, and to the way of life of the Native peoples on the region.

“We need to be heard as many people and one voice,” said Jewell James, Master Carver of the House of Tears Carvers. “We need to let them know they cannot in the name of profits do this to the people, the water, the land , and to the future generations. We will never give up. They must not pass!”

The 19-day journey will begin in Bellingham (WA) and includes events in Vancouver (BC), Seattle (WA), Longview (WA), Sandpoint (ID), Missoula (MT), Edmonton (AB), and Winnipeg (MB), where it will be installed at The Place Where the Two Rivers Meet. It will also include events at the Yakama Nation, the Spokane Tribe, and Cheyenne River Indian Tribe (SD). The journey can be followed at the website www.totempolejourney.com.

Read the press release on the Our Shared Responsibility: A Totem Pole Journey Facebook page here.