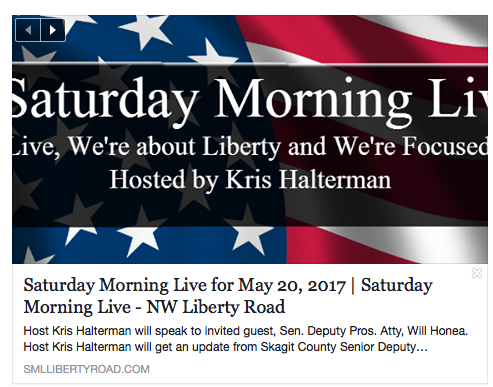 May 29, 2017: This article has been updated at the conclusion of the original post with additional information about material attributed to Swinomish Indian Tribal Community Chairman Brian Cladoosby and used out of context by Skagit County Senior Deputy Prosecuting Attorney William Honea and KGMI conservative radio show host Kris Halterman.

Skagit County Senior Deputy Prosecuting Attorney William Honea said in one of his May 22, 2017 comments on a Facebook comment thread: “…Swinomish, which represents 0.4% of the [Skagit] County’s population, is claiming superior jurisdiction over much of the land base, and its leadership is talking about how great it will be when everyone else leaves. Can you blame the people at Willman’s lecture for being a little freaked out?” 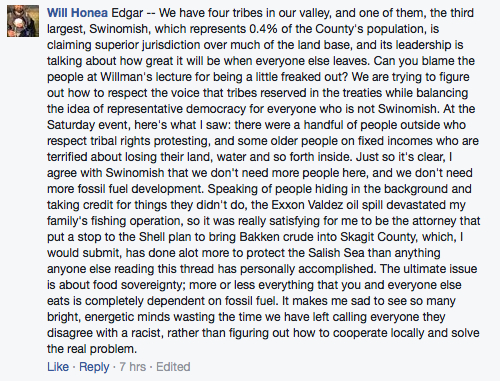 I do not know for sure where Mr. Honea heard Swinomish leadership talking about “how great it will be when everyone else leaves.”

I do know that right before attending the workshop sponsored by the Skagit County chapter of Citizen’s Alliance for Property Rights, that anti-tribal-treaty and anti-tribal-sovereignty consultant Elaine Willman was giving on Saturday May, 20, 2017, Mr. Honea was on Kris Halterman’s Saturday Morning Live radio show on KGMI, where they discussed the Swinomish tribe.  You can learn more about Mr. Honea’s perspectives on the Swinomish tribe and leadership from listening to this broadcast.

The remark I mentioned of Mr. Honea’s in the comment he made on Facebook made me think of something discussed on that show.

During one portion of the show, Mr. Honea was alleging that the Swinomish tribe’s hiring “very radical attorneys” has had damaging effects on the community in Skagit County. When asked by Ms. Halterman whether this was attributable to Swinomish families or the current tribal council, Mr. Honea said that it was the leadership.

Below is a transcription of Ms. Halterman’s response:

“But when leadership says things like: ‘Gone is the 19th-century attempt to defeat Europeans or the 20th-century attempt to assimilate. The strategy now is to marshal attorneys, money, land, and political clout to outlast them.  I call us the weebee people,’ said Brian Cladoosby, president of the National Congress of of American Indians, ‘WeBe here when they come and WeBe here when they gone.’

“That’s not exactly a great starting point for actually getting along.”

I wanted to know where this quote, attributed to Swinomish tribal Chairman Cladoosby, had come from, so I looked it up in an online search.  I found the quote in two places.  One was in a letter that Mr. Honea had written to the Swinomish tribe on April 24, 2017 in his capacity as senior deputy prosecuting attorney for Skagit County.

He referenced the material Ms. Halterman had read on her May 20 show. Here is how it appeared in his letter.

“As your Chairman recently explained in a national publication:  Gone is the 19th-century attempt to defeat Europeans or the 20th-century attempt to assimilate. The strategy now is to marshal attorneys, money, land, and political clout to outlast them. ‘I call us the weebee people,’ said Brian Cladoosby, president of the National Congress of American Indians. ‘We be here when they came, we be here when they gone.’”

You can see that in the instance of Mr. Honea’s letter it becomes clear that, of the material that is being attributed to Chairman Cladoosby by Mr. Honea and Ms. Halterman,  there is only a small section that is actually quoted: “I call us the weebee people,” and “We be here when they came, we be here when they gone.”

The article where this material originated is the second place I found it in my online search.  It is an Outside article by Mark Sundeen entitled “What’s Happening in Standing Rock?”  There is nothing indicating that the unquoted section of that paragraph is something Chairman Cladoosby actually said.  In fact, the unquoted section of the paragraph appears to be a statement by the author, Mark Sundeen.

It seems to me that doing things such as publicly asserting that the Swinomish tribe is saying things like, “it will be great when everyone else leaves,” for which no real proof is provided, might be one of the reasons that people like those at Willman’s lecture could be “a little freaked out.”

For a better sense of context, here is a section of the Outside article that includes this material plus the paragraph before it and and the paragraph after it. I am not applying additional quotation marks so that it is clear how the material appeared in the original article by Mark Sundeen:

“Climate change is inherently racist,” said Nick Estes, co-founder of activist organization the Red Nation and a PhD candidate in American Studies at the University of New Mexico. “The Anthropocene began with fossil fuel extraction, which began with colonization. The rise of temperatures began with the industrial revolution. And the damage was done to ‘expendable people,’ exploiting the labor of black people and the land of indigenous people.”

Gone is the 19th-century attempt to defeat Europeans or the 20th-century attempt to assimilate. The strategy now is to marshal attorneys, money, land, and political clout to outlast them. “I call us the weebee people,” said Brian Cladoosby, president of the National Congress of American Indians. “We be here when they came, we be here when they gone.”

Perhaps the most startling idea to emerge is a full upending of the narrative of the benevolent—perhaps paternalistic—white liberal uplifting the oppressed minority. People I met here felt that white people had strayed so far from their spiritual core that it was the Indian who would have to rescue them. A Pawnee hip-hop artist who calls himself Quese IMC (born Marcus Frejo Little Eagle), with black beard, hoop earrings, thick-rimmed glasses, and a cocked ball cap, told me that both racism and exploitation of the earth came from the same sickness: a lack of spirituality, which breeds a lack of compassion for other beings. “The earth is a spirit, the water is a spirit, and if you have no spirit, and you have no connection to those things, it will be easy to destroy them and not even care.”

To me, Chairman Cladoosby’s quoted words are far from dismissive or alienating. Native Americans have endured incomprehensible oppression, persecution, physical, emotional and spiritual damage at the hands of what we call the United States of America.  And yet they are still here advancing in their healing process, offering all of us an education in what it takes to persevere and rise above that which would, over and over, try to destroy us.

Here’s another place I have discovered the paragraph referenced above, taken from Outside magazine (that was used by Mr. Honea and Ms. Halterman) presented, again without context, in a manner to cast aspersions on Swinomish Chairman Cladoosby.  I came across a post on the Save Family Farming/Skagit Family Farming webpage entitled “The Swinomish Jurisdiction Issue.”  Save Family Farming is a agriculture public relations campaign created by consultant Gerald Baron. The webpage contains a considerable amount of material aimed at getting people to urge Secretary of the Interior Ryan Zinke to reject approving recent changes Swinomish Indian Tribal Community made to their tribal Constitution.  At the top of the page is a video entitled “The Swinomish Jurisdiction Proposal.”

Below are screen shots of the misuse of the Outside magazine paragraph (for which there is no source cited) in the video. 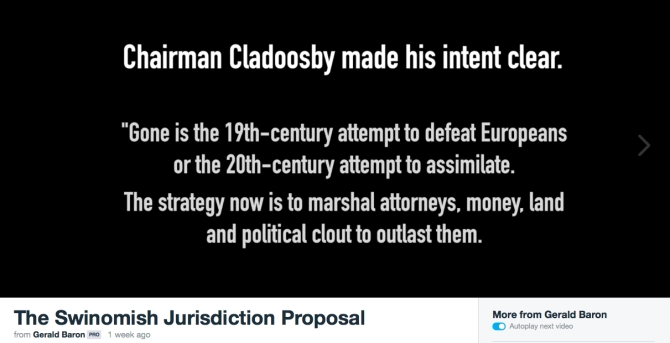 In general the video mimics the allegations made by Mr. Honea on Ms. Halterman’s show that the Swinomish tribe is “conflict-oriented” and is anti-agriculture and directs viewers to find out how they can help at http://www.skagitfamilyfarmers.org, which re-directs people to the http://www.savefamilyfarming.org/swinomish-jurisdiction-issue.html/ address and urges them to take actions varying from reading “this information,” to writing to Interior Secretary Zinke, to making contributions to Save Family Farming.