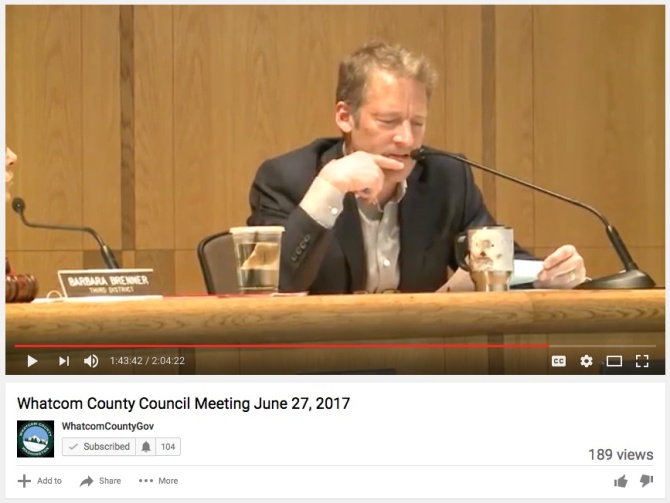 I am posting this link to a portion of last week’s [June 27 2017, Whatcom] County Council meeting where Council Member Donovan says he is trying to figure out how to procedurally approach addressing an ordinance and concerns people have expressed having to do with how our law enforcement agencies might be interacting with people of the immigrant community. He says that a group of people have brought this to the attention of himself and Council Member Weimer.

I would encourage people to listen to this exchange and when you do, to try to imagine you are perhaps an undocumented immigrant who is listening to this exchange. It would be great to get some responses, both from this imagined perspective, and your own as well, here in the comment section.

To me, it is one of the most illuminating discussions I have heard representing the big hurdles we are facing in terms of lack of education of what oppressed and marginalized communities are experiencing here in Whatcom County (especially under the weight of our current oppressive federal administration). There is a lack of support for public critiques and expressions of distress from marginalized communities during this stressful time regarding such topics as immigration enforcement and detention. Plus, there seems to be denial by our representative regarding concerns and problems of those who are oppressed, and about collective protections being provided to people who already have a lot of power such as other government officials or law enforcement authorities at the expense of those who haven’t even been meaningfully listened to yet.

Please listen, but here are the highlights:

Council Member Mann: “I’m willing to have the discussion. I think I already have my mind made up on the topic which is probably not in line with whatever proposal would come forward.”

Brenner: “Are you talking about creating a Sanctuary County?”

Donovan (smiling): “No, I wouldn’t use that word.”

Brenner: “Yeah, I wouldn’t either.”

********
Council Member Browne: [consulting notes] he says he is supportive of not mixing immigration with law enforcement, adds reasons:

“Evidence has shown that when you do that, you end up with victims very reluctant to come forward. It makes them very subject to being re-victimized. This is particularly true of victims of domestic violence. It also discourages people from seeking medical attention if they need it, which then turns a minor issue into, can turn a minor issue into a significant issue. And there’s also the public health issues, in terms do we want any citizen or any resident , or any person no matter what their status making sure they neither contract nor distribute a communicable disease. So we want them to be able to access public health issues without fear.”

[Please remember this quote from Council Member Browne when you listen/read the rest of what followed it, like this part, “Council Member Browne: thinks it’s a solution looking for a problem. Wants well documented evidence. Never heard any first person accounts.” ]

Council Member Browne: says that he has consulted police officers and feels they have expressed that they all see the damage it does to community policing. [He made no mention of any conversations with immigrant populations] He is “reluctant to give any weight to the suggestion that our officers are acting in a way that is contrary to what I understand it.”

Coouncil Members Mann, Brenner, Donovan, Browne all convey they have complete confidence in what the Sheriff tells them about how they are handling immigration issues.

Council Member Brenner: suggests Donovan bring forth cases. Can of worms unless there are abuses.

Council Member Donovan: What if the Sheriff isn’t around or there’s a different Sheriff. Maybe they should be codifying what they are doing now.

Council Member Brenner: “I’m the one that staff always says, ‘call Barbara Brenner’ with any – so I hear from [mic noise] and I’m in the phone book unlike probably most of the rest of you guys…so, I’m really easy to get ahold of and I am friends with, you know, quite a few immigrants in the county and I don’t ask anything about any of their status, I really don’t care. But I, I’m not hearing that. ” She suggests letting the Sheriff codify what is currently going on and draft that and bring it to the council.

Council Member Mann: says he was remembering what happened across the street with Bellingham when they brought up this topic – “so much was made and so much energy and time and angst was expended on an issue that in my observation, and in the reports that I don’t get from anyone, that we have a problem. I’d want to see a proposal first.” Wants to see it in writing.

Council Member Donovan: doesn’t want to go through the “experience that the city  [Belllingham] had.”

Council Member Weimer: said he and Mr. Donovan had been speaking to the same group of people as across the street and would not entertain the ordinance “because of what went on.” “It causes great divisiveness instead of bringing everyone together.” “Now on the otherhand…there is this angst amongst the immigrant community and they don’t seem to have an outlet for it. But I don’t, can’t dream up how you create an outlet.”

Council Member Brenner: wants people to bring their concerns to the Sheriff.

Council Member Buchanan: in 2009 there was a huge hearing held on the same issue in Municipal Court Building and it was “very divisive.”