Oxford Dictionary definition of elite: 1.1 “A group or class of people seen as having the most power and influence in a society, especially on account of their wealth or privilege”

What do we think about an elite citizen here in Whatcom County, such as Ted Van Dyk in his August 23, 2017 opinion piece in the online edition of Cascadia Weekly, asserting that the City of Bellingham temporarily taking down the signs at the so-called Pickett Bridge has “fed intolerance?” On social media this last week there was also an August 24, 2017 statement on The Pickett House FB page by past president of the Daughter of the Pioneers, Susan Hess expressing fears “that someone, in ignorance, will assume that Bellingham’s Pickett House Museum is a confederate monument and do it harm.”

What do we think about individuals in Whatcom County this week serving to carry forward the President’s disgraceful messaging – on the occasion when white supremacy, hate-speech, and acts of hate grabbed the spotlight in Charlottesville – that we need to condemn hatred, bigotry, and violence on “many sides?”

Mr. Van Dyk makes his allegation about the Pickett Bridge sign removal feeding intolerance without saying what kind of intolerance he is talking about. He offers no examples of it and goes on to minimize the role that slavery played in the Civil War immediately after stating George Picket had “resigned to join his home-state forces.” He does not say his home state forces were Confederate forces and only mentions Pickett rose to the rank of Confederate general a few paragraphs later and right before he moves his focus to General Robert E. Lee and how statues honoring such men as Lee “have been a part of daily life over decades.” Van Dyk continues on to maintain that most that served and died for the Confederacy were “no more racist than ordinary German, Russian, Chinese and Cambodian citizens in the 20th century were Nazis, Stalinists, Maoist or followers of Pol Pot.”

Mr. Van Dyk then talks about all the things he has done ostensibly to strengthen civil rights in our country, following that by asserting “angry, violent” demonstrations countering white supremacist marches and acts of violence are what leave “a false impression that racism in 2017 is just as viral as it was in post-Civil War Ku Klux Klan days or even as recently as the 1960s.”

That’s what’s happened, is it?

What’s more, Mr. Van Dyk does not even mention the hate speech, murder and injury of activists and people of color by white supremacists in Charlottesville, VA and implies “African American and more liberal groups” are just being duped by a “small, residual group of white supremacists.”

Nothing to see here folks. Move along.

To hear what the Pickett Bridge issue means to people of color and marginalized members of our community, please click on the graphics below: 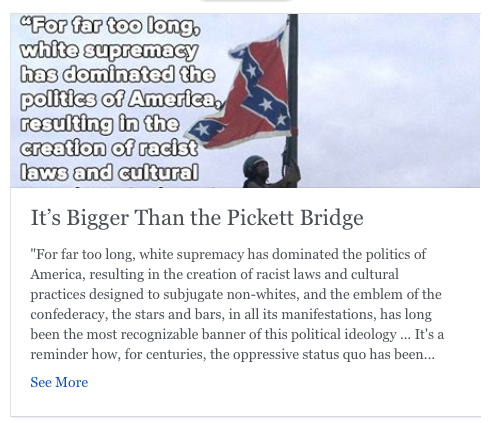 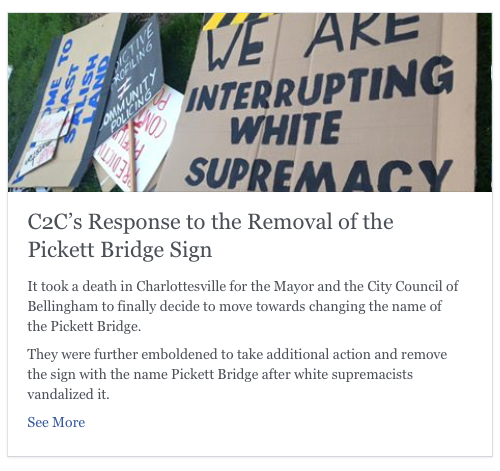