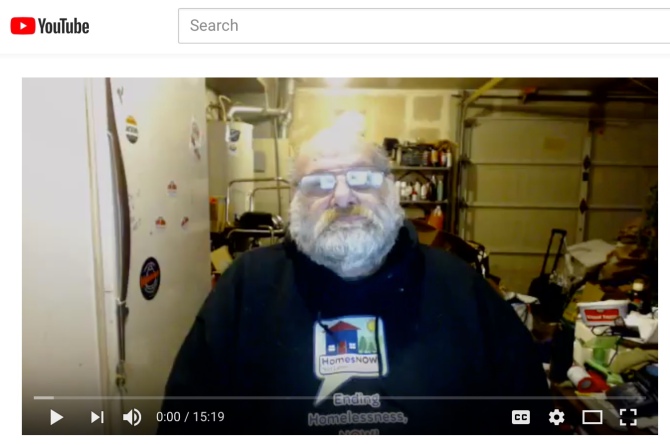 I am writing to encourage all of you council members forward in actions toward ending homelessness in Bellingham and Whatcom County. This week, a post was shared in the Riveter’s Collective Facebook group alerting people to a new Facebook page called Stop the Sweeps Bellingham. HomesNow. Not Later. President Jim Peterson wrote the description for that page, which is as follows:

“This page is for the Bellingham homeless to draw attention to the homeless camp sweeps that are going on here and to raise awareness. It is time the city stops moving homeless from one place to the next if the city cant house them then they need to set up safe places for people to camp and provide dumpsters and porta pots at the least. But throwing people’s houses away and moving them from point a to point b is not a solution. The City of Bellingham calls them homeless camp cleanups when in fact they are homeless camp sweeps.”

Jim Peterson had commented on the post I mentioned, saying that there are better solutions than homeless camp sweeps and that the city just has to be willing to think outside the box.  County Council Member Ken Mann had responded to that comment, asking what the better solutions were, and Jim had answered that question in the short video that I am including a link to here:  https://www.youtube.com/watch?v=N9RGlo1sGZM&feature=youtu.be

I urge you to watch all 15 minutes of it, but I am also including a transcription of some of the essential suggestions Jim offered below my signature in this email.

I want to make you all aware of the good work Jim is doing and his excellent goal of ending homelessness in our community by 2020.  Some have categorized Jim’s work as “feel good” efforts, but I would strongly disagree.  Jim has spent countless hours talking to homeless members of our county to learn about their needs, who they are, and what challenges they experience.  He has developed relationships, raised funds, and has built tiny homes with members of Lummi Nation’s Stepping Stones program to help end homelessness for individuals on the Lummi Reservation. Jim Peterson, Douglas Gustafson and many volunteers have been putting on Homeless Summits every month since July to help feed, clothe, and network with people who do not have homes.  They have also conducted interviews and created many videos to help educate and inform the public about their work and issues surrounding homelessness.

I call on all of you council members to reach out to Jim and others doing similar work in seeking to offer solutions to providing homes to those who do not have them in Whatcom County. Please listen to and consider his solutions, ways they might be implemented, and seek to gain further benefit of the research he has done.  He and other leadership at HomesNow would be one good source of education about and building relationships with the real people in our community who would greatly benefit – which, in turn, would provide benefit to our community – if housing were accessible to them.  I believe if you and others can be successful in removing obstacles to HomesNow building houses and offer assistance toward putting into practice some of Jim’s suggestions, that you would see some incredible results!

Here is the transcription of selected portions of Jim’s answer:

“So, my first priority if I was the city and I was charge of dealing with the homeless, my first priority would be, identifying the camps, finding out where they are, putting in a dumpster in a convenient location to the camp and two porta-pots. And then I would go into the camp and I would tell the people that are living in the camp that we’re coming back in two weeks.  If the camp is not cleaned up or is not kept clean then we’re going to ask you to leave. That is the first thing I would do before I did anything else.”

“Second, set up a safe-zone for people to camp in. I keep coming up with Maritime Heritage Park.  We all know in the city, whether you want to admit it or not, Maritime Heritage Park is used mostly by the homeless. There’s bathrooms right there in the park…I will say this, as the president of HomesNow, HomesNow would find the money to pay for security cameras for the park, if the city would agree to it.

“Then the third thing I would do is find a safe place for people that live in their cars and campers to park. You’d be surprised how many people actually work full time jobs but they’re living out of their cars or in campers they’ve got to move them every 28 days…But there’s no place for people to park and you’ve got to move your car every 8 hours or 12 hours so there’s no stability, so, that.

“Then the fourth thing I would do is start letting HomesNow. Not Later. build tiny homes someplace.  It’s not that difficult. And I’d start taking these boards off some buildings and start rehabbing them and that.

“And then another thing I would do is I would start building some…apartments that are set aside – not 5%, not 10% – 100% for people that are living on the streets. And make it so they only have to spend 30% of their income.“

This letter was sent to the following addresses: