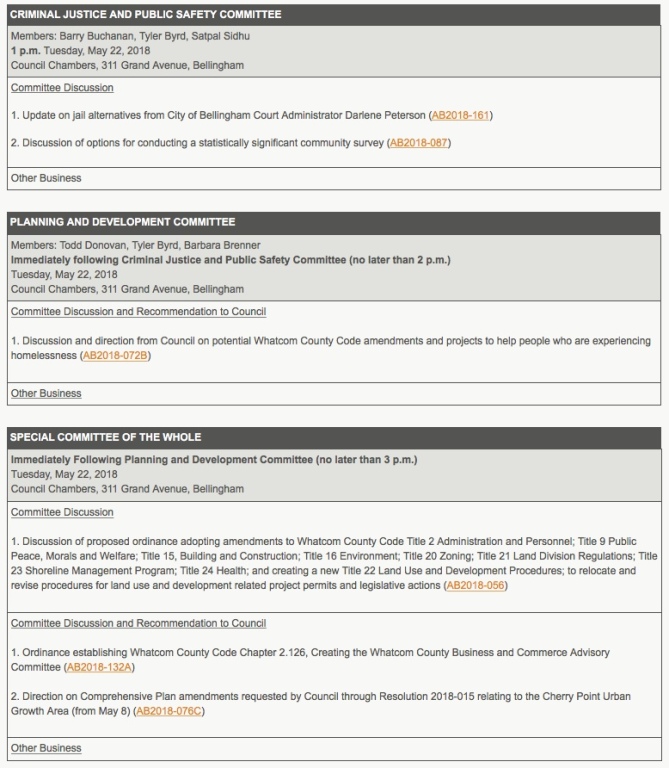 Click the graphic to access the full agenda for the Whatcom County Council Committee and Council meetings for May 22, 2018

I wanted to give a little overview on what Whatcom County Council will be talking about in their committee meetings today, Tuesday, May 22, 2018. I don’t know that there is anything particularly significant regarding tonight’s meeting (but you never know, depending on how discussions go during the day).

I have been listening to some of the committee meetings over the last few weeks, so am sort of getting a feel for where things are at with those discussions of some of these issues.

I feel we should all be alert to the survey about the jail, criminal justice, and public safety because, according to past discussion, this is likely going to be a survey that will be qualifying the people responding in an attempt to get a fair representation of diverse input. My main concerns would be the type of qualifications used, the type of questions being asked, how they would be asked, and what would be done with the information after it is received.

The discussion about revision of County code regarding people experiencing homelessness, I believe, is going the direction of trying to find ways that entities besides religious organizations could host activities on their properties, such as tent cities and tiny home communities. County staff seemed to confirm last week that currently the hosting by religious organizations is the only option.

Last week Executive Louws had provided Council with a map of all the available properties in Whatcom County that they could review to see if any were suitable for hosting the above-mentioned activities. The Executive continued to imply in his remarks about the properties, as he has done before, that any decisions to work with most organizations other than the Lighthouse Mission (such as an organization like HomesNow), were all on the Council. People should be aware that Executive Louws’ wife Cindy serves on the Board of Directors for the Lighthouse Mission.

I don’t remember any specific highlights from last week’s discussion of the amendments to County code regarding land use and the Shoreline Master Plan, among other things. It’s just something to keep an eye on because vesting of projects is involved, which is something, if not properly dealt with in the code, that can allow projects, which have been applied for back when regulations were more lenient, to be moved forward in the present time without requiring protections offered by those more recent regulations. 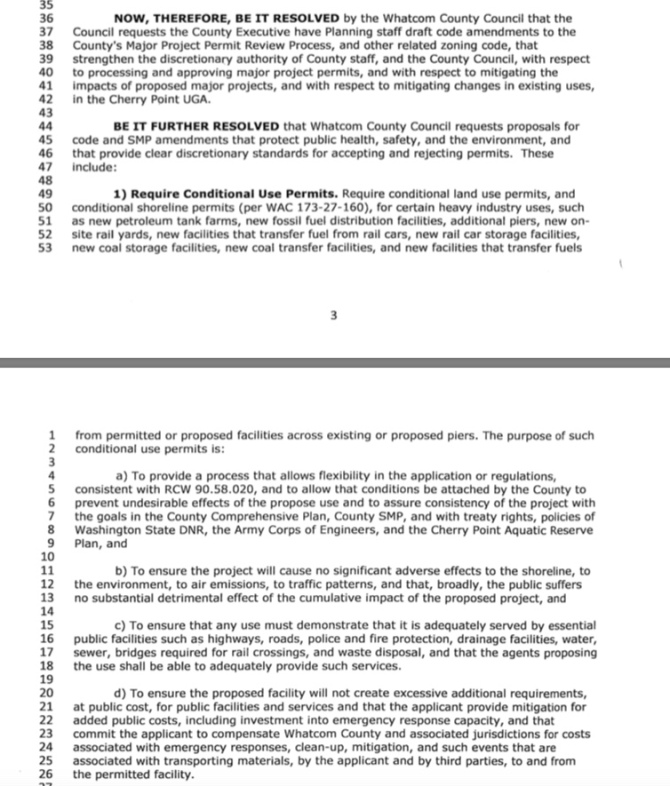 Last, but definitely not least, the discussion of amendments relating to the Cherry Point Urban Growth Area is centering now around Council Member Donovan’s proposed resolution to direct County staff to draft legislation relating to processing and approval of Major Project Permits in the Cherry Point UGA. At the May 8, 2018 meeting, Council Member Brenner, was still trying, I believe (I am going from memory), to stop the whole resolution from being put forward, but barring that, was asserting that propane, butane, and liquified natural gas should not be considered in with other potentially dangerous fuels that the resolution was seeking to have staff address in potential legislation. Council Member Byrd agreed with Council Member Brenner on this.

Council Member Byrd used the excuse that natural gas and propane are considered “green fuels” as a reason to not include them in the legislation to help mitigate negative impacts from new projects. Other Council Members reminded him that this does not make the transport and storage of these fuels any more safe to the surrounding community.

Council Member Byrd also asserted  that other Council Members were changing the explanation of why they were pursuing this legislation from being, months ago, about not wanting to export refining jobs out of the country, to, all of a sudden, their now being concerned about public safety. Council Member Donovan vehemently objected to this, saying that safety has always been discussed as a reason for pursuing this, and I can attest that Council Member Browne, just as one example, has long been expressing concerns about safety (especially regarding the train explosion at Lac-Mégantic). Plus, I would say the public’s repeated primary complaints regarding these products has been about the health and safety of our people and our region.

It ended up that further discussion about the definition of the types of projects included in the legislation was put off due to time limits that day.

There was more to the discussion, so, the main thing is people should stay up on this because it has taken good money and a lot of effort to begin to pursue legislation that will be more protective of our County funds, our Salish Sea, our lands, air, waterways, life forms, and  community members, especially those that live along the rail lines and near the refineries, plus the workers at the refineries.