Next week, on Wednesday, June 5, 2018, the Port of Bellingham Commission will be voting on whether to authorize, “the Executive Director to enter into agreements with event organizers to close Port parks and hold private events for up to three uses per year.”

I encourage people to write a note or show up at the Port’s June 5, meeting  (contact information for the individual Port Commissioners is listed at the bottom of this blog post) to let them know how you feel about this, as it is relevant to our government agencies’ need to recognize that our community is in the midst of crises regarding affordable housing and people who do not have homes or permanent shelter.  Just as important, is that public process is not being served by the Port’s current approach to this matter, since the community at large, and specifically those most directly affected by these crises, are not being adequately alerted and consulted prior to decision making by the Port.

At the May 15, 2018 Port of Bellingham Commission Meeting, two of the three Port Commissioners, Bell and Shepard, approved shutting down Zuanich Point Park to public access for a 24 hour period on August 17, 2018, so that an event, put on by a private enterprise who would be charging admission, could have full access to that public facility.

This issue was initially of interest to me because I have been following some issues involving people with limited financial means and those who do not have homes or permanent shelters.  Thanks to HomesNOW! Not Later. raising awareness about the fact that there are very few places that people without homes in the City of Bellingham can legally exist, it struck me that the Port taking away access to a public park could set a precedent for more government agencies doing so. Further, such actions can increasingly restrict legal things for people without homes to do, i.e. hang out in a public space with rest rooms, trash, and recreational options, or legal places for them to be, i.e. a park, which everyone in the community is supposed to have access to.

To me this action of taking away community members’ access to a public park seems particularly callous when no lands have yet been provided by the Port of Bellingham or any other local government agency for tiny home communities, tent cities, or the less desirable/effective option of an emergency shelter.

Additionally, it is my understanding that the money the Port would make from the very first of these events is proposed to be used for signs that primarily are going to promote commercial fishing.  Commercial fishing  is a valid enterprise, but in my opinion, the use of revenues, if such events that exclude community members who can’t pay are to be permitted, could be better spent on solutions related to our homeless crisis. The inhumane situation of people not having a place to legally rest and tend to critical hygiene needs that hundreds of local people experience, plays out at the port, in our cities, and in our county.

While all of these things were of concern to me, the fact that the vote to shut down Zuanich Point Park by the Port Commissioners, was done on May 15, 2018, without an alert about such a vote showing up on the agenda for that Port Commission meeting was alarming.

After the May 1, 2018 Port Commission meeting, where the issue of closing Zuanich Point Park for summer events was originally discussed, a rather biased, and definitely informal poll had been posted on Facebook by Port Commissioner Shepard which gathered close to 500 votes.  72% of the people responding to the poll chose “Yes, try renting the park.” Here was the way the text of the poll read that people were responding to:

“I’d appreciate your input on this question. How would you feel if the Port rented Zuanich Park to a private company for a music festival, on a Saturday in August. The Port would have to close the Park for public use. The festival would require paid admission, draw larger national bands, showcase our beautiful waterfront, generate retail/tourism revenue and disrupt public access for a day.” 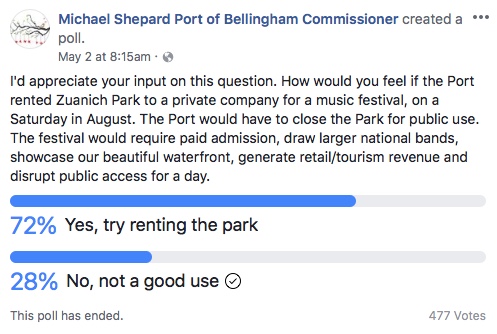 However, the poll gave very little detail and was actually inaccurate about the fact that, “the Port would have to close the Park for public use.” Two parties had approached the Port for rental of Zuanich Point Park for events on two different summer 2018 dates and, although the parties were requesting park closure, both parties had also indicated they would still pursue holding the event at Zuanich Point Park without the park being closed down entirely to the public.

According to Executive Director Fix, the Port has already approved an event that would partially close the park for the Rock’in to the Blues Festival, on September 1, 2018, for which there is already a Facebook event posted. Alex Dixon, the owner of the Summer’s End Music and Arts Gathering event, for which Zuanich Point Park will now be shut down to the public on August 17, 2018, was ready to promote the event with only partial access to the park available, before the Port Commissioners decided to go ahead and vote to permit the full park closure for that event on May 15. Thus, the decision to shut down the entire park to the public would not have precluded these events from moving forward.

“At the last meeting, commission voted to allow a park rental for a summer concert at Zuanich Park. This item had not been listed on the agenda. We have clearly heard that some felt there was insufficient public process and opportunity for comment on this issue. Accordingly, a vote on future authority of the executive director to permit limited park rentals is on this meeting’s agenda. Your opinions are encouraged. We may not all agree on the vote outcome, but I am committed to improving the transparency of our decision making process. I always appreciate you letting me when I can do better. I believe that the extensive dialogue on this topic is already proof that we are achieving greater accessibility and accountability, between the Port and Public. Thanks for being engaged and active!” 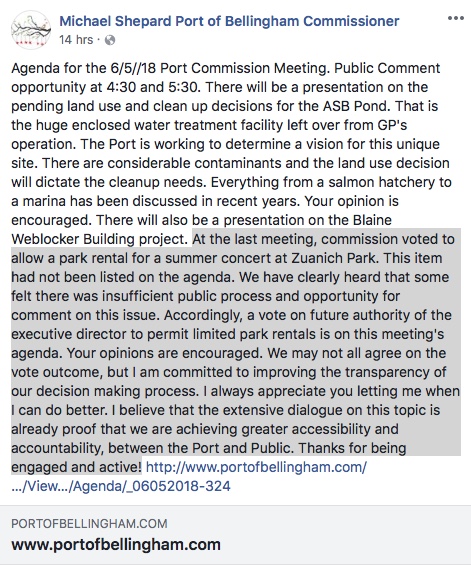 It was shocking to me to find that Port Commissioners will imminently not just be discussing the option of closing down the park for more private events in the future, as I feared they might, but that they will actually be voting on this in just a few days!

Here is a copy of the full memorandum regarding “Concerts – Private events in Port Parks from the Port’s Executive Director Rob Fix: 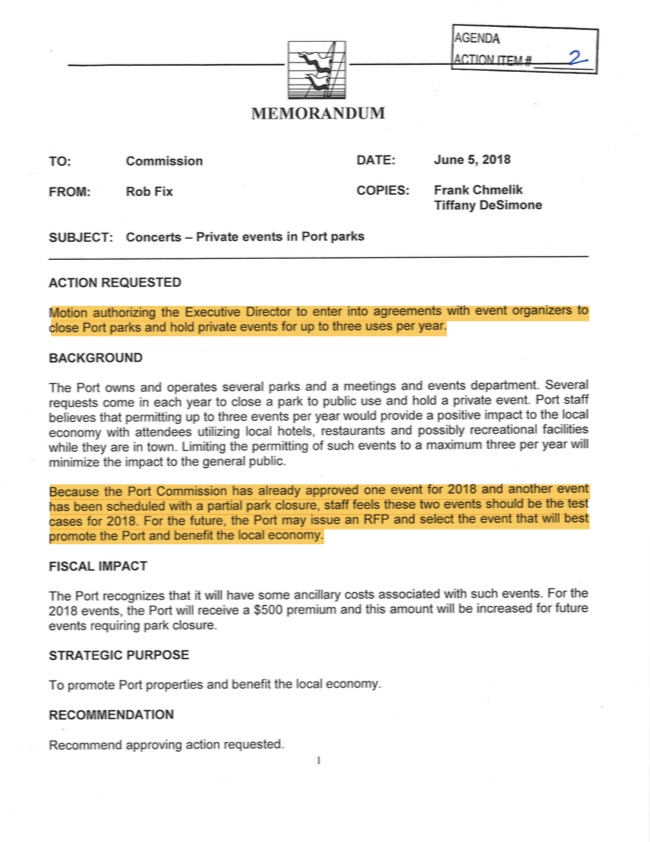 In the memorandum by Executive Director Fix, and also according to Port Commissioner Shepard in comments he had made on Facebook, this is supposed to be a pilot program, yet I have not seen any official representation that this is the case.  Furthermore, I do not understand how, “authorizing the Executive Director to enter into agreements with event organizers to close Port parks and hold private events for up to three uses per year,” is any kind of action that allows for feedback and engagement from the public in the future on this matter. While public input could be asked for, there is no necessity for it if the Executive Director has already been granted the power to do so by the Port Commissioners at this next meeting of theirs.

There are other important things on the Port’s agenda for this week, and perhaps to some people this issue will be of lesser significance compared to the others. However, with at least two of the Port Commissioners hurrying to make decisions that exclude community members from public spaces, and doing it in a manner that restricts community members from having adequate time to form and deliver their opinions to the Port Commissioners, this seems to be a matter that casts a shadow on all other Port decisions, and procedures.

Here is the contact information for the individual Port of Bellingham Commissioners: