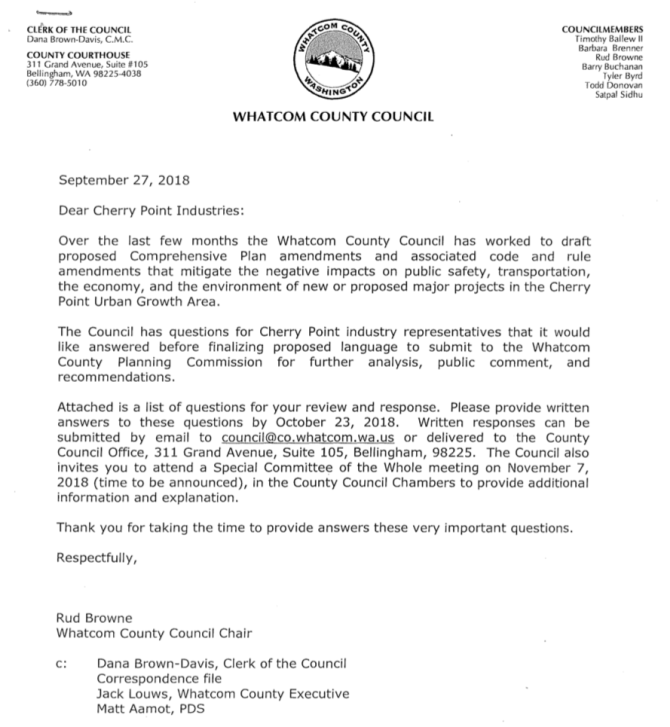 Public comment, most consistently from union members and refinery employees, has continued to trickle in, a few per meeting, on an ongoing basis for the last few months, regarding the Whatcom County Council’s work on amending the Whatcom County Comprehensive Plan related to Cherry Point.  It’s time to freshly-inform ourselves on the County Council’s process in this regard to make sure they have support for what they have done well, and have our calls to action for what we want them to do better.

At 2:45 p.m. on Tuesday, December 4, 2018 the Whatcom County Council Special Committee of the Whole will have a discussion, “regarding preliminary draft Comprehensive Plan and zoning amendments – Cherry Point (discussion to focus on industry responses to questions asked by Council in September) (AB2018-076D)”

I am including screenshots of the September 27, 2018 letter sent by the Council that included their questions to the industries at Cherry Point. I have also included a screenshot of the first page of Phillips 66’s November 7, 2018 letter in response (written by Tim D. Johnson, Director, Public and Government Affairs for Phillips 66 Ferndale Refinery) because I wanted to make people aware that Phillips 66 didn’t just answer the questions, but they also needlessly and  inaccurately described the purpose of the Whatcom County Council’s letter and amendments to the Comprehensive Plan regarding Cherry Point, which therefore allowed Phillips 66 to complain about things that are not, in reality, happening.

While other Cherry Point Industries responding to the County Council’s letter did toot their own horns about how safely they operated and what regulations they already adhere to, they did not misrepresent what the Council wrote to them or the Council’s goal in making the amendments to the Comprehensive Plan. The company responses in the agenda bill included those from Trans Mountain, Phillips 66, Olympic Pipeline Company, Petrogas, BNSF Railway, and Cascade Natural Gas. There was not a copy of any response from BP Cherry Point.

Here is the stated purpose of the Council’s letter:

“Over the last few months the Whatcom County Council has worked to draft proposed Comprehensive Plan amendments and associated code and rule amendments that mitigate the negative impacts on public safety, transportation, the economy, and the environment of new or proposed major projects in the Cherry Point Urban Growth Area.“

And here is Phillips 66’s reframing of that purpose:

“Phillips 66 notes that the purpose of this information request is to gather information which helps the Council develop regulations which could severely limit or preclude continued or new processing of petroleum in the Whatcom area.”

“Additionally, in contrast to what the Council’s September 27, 2018 letter states, the presence of our facility has many positive impacts on the economy, our community, and provides sustaining family wage jobs.”

Phillips 66’s “many positive impacts” are not at all in contrast to anything the Council’s September 27, 2018 letter to Cherry Point Industries states.

The assertion that the purpose of the Council’s letter (or even their amendments to the Comp Plan) is with the goal to limit “continued” processing of petroleum in the Whatcom area is ridiculous.  Council is not proposing any amendments regarding the processing currently being done at Cherry Point Industries. Plus, the only limits on “new processing” might potentially be imposed by a public process that would find a particular project to have unacceptable negative impacts during review of an application for a conditional use permit which industries would need to submit if their projects meet stated criteria related to certain hazardous materials.

Below I am providing the text of how the currently proposed revised Policy 2CC-16 of the Whatcom County Comprehensive Plan (Chapter 2 – Land Use) would read after some language was removed and after some was added to create the amended text:

“The County will, through applicable permitting processes, limit the negative impacts on public safety, transportation, the economy, and environment from new or expanded crude oil, coal, liquefied petroleum gases, natural gas, and radioactive substance exports from the Cherry Point UGA above levels in existence as of March 1, 2017.

“The Prosecuting Attorney and/or the County Administration should provide the County Council written notice of all known pre-application correspondence or permit application submittals and notices, federal, state, or local that involve activity with the potential to expand the export of fossil fuels from Cherry Point.”

People can look through the rest of the proposed amendments to see the changes (in red). The “applicable permitting processes” are explained and largely revolve around the fact that new or expanded crude oil, liquified petroleum gas, and natural gas facilities would require a conditional use permit. 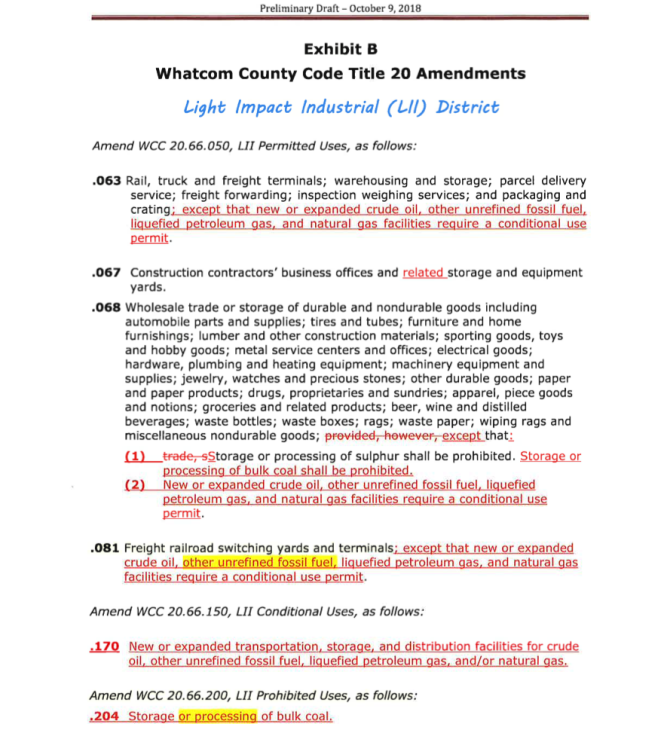 Click the graphic to access the October 9, 2018 preliminary draft of the Cherry Point Amendments to the Whatcom County Comprehensive Plan

Meanwhile in the amendments it’s also notable that bulk coal storage facilities would now be a prohibited use, as would new piers in the Cherry Point Urban Growth Area.

It remains to be seen how the amendments might be altered after the Council evaluates the industry responses to the questions they asked them.

Addresses to send comments to the Whatcom County Council:

(I will add Council Member Frazey’s address after I am assured that it is active.)

One thought on “Less threats to the Salish Sea, Xwe’chi’eXen, and our community: the 2018 proposed Whatcom County Cherry Point Amendments / Noisy Waters Northwest”