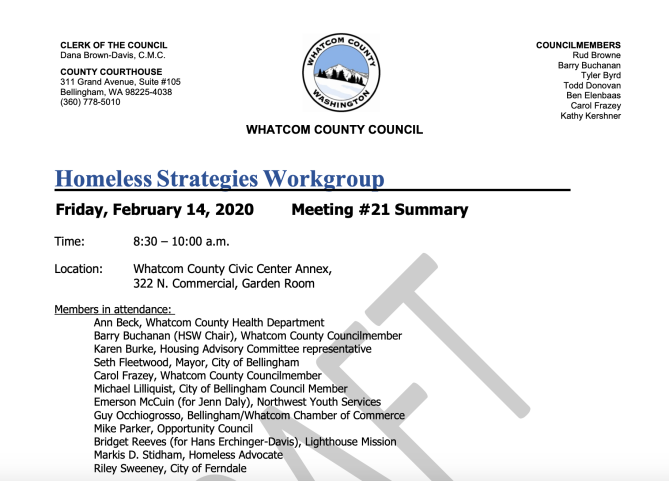 Here is the email I sent this evening to Whatcom County’s Homeless Strategies Workgroup:

Subject: Regarding 1. make-up of HSW membership 2. People being turned away from shelter during hostile weather

I listened to the February 14, 2020 Homeless Strategies Workgroup (HSW) meeting and wanted to offer some thoughts on a couple of issues that came up during the meeting. During one portion of the meeting there was discussion about adding additional members to the workgroup. There had been a suggestion that possibly DVSAS should have a designated position on the workgroup. And then it was suggested that category be more broad, so as to not single out one particular organization but to represent the type of population they serve.

When Markis Dee of HomesNOW!, who is also a homeless advocate representative on the workgroup, spoke up to suggest that a position be added to the workgroup to represent tiny home providers, someone again urged there should only be focus on types of unsheltered population served. However, after that, there were suggestions by others of offering positions for school representatives and WTA representatives. The only position added though, for a type of organization, was for schools. Schools as a category is in contradiction to the idea of membership slots being provided regarding segments of the unsheltered community for which HSW is trying to come up with solutions.  To be consistent, the “schools” position seems like it should be changed to “students.”

Additionally, if the intent is to offer membership slots on the workgroup only to segments of the unsheltered community, there are already contradictions to that approach with the make-up of your workgroup. So that argument seemed to be a convenient argument means to vie for what some members of the workgroup wanted in the way of new members right at that moment, rather than something that was in keeping with the already established approach for membership.

It was particularly distasteful to hear Belllingham’s Planning and Development Director, Rick Sepler, indicate that tiny home communities should not have a membership slot on the HSW right now, since only 18 people are currently being served at Unity Village. With the success of tiny home communities in other regions, as well as here in our county, it is shortsighted and disrespectful to under-rate and under-value the history of work and future potential of this particular homeless strategy in that manner.

Another thing I wanted to bring up is regarding the discussion of recent capacity levels at The Lighthouse Mission and Civic Field. To my knowledge, none of the severe weather shelters have been opened since mid-January of this year. And during the discussion, as I have noted in the past, there seemed to be a sense that meeting attendees were hopeful that maybe the forecasts would be favorable to severe weather shelters not being opened the rest of the winter. That mindset seems so dangerous to me, and quite shortsighted, as well.

Ms. Reeves from the Lighthouse Mission was saying that their facility had been at capacity, had needed to get creative – which she explained meant putting mats on the floors in hallways and other rooms not normally set up for overnighting people – and on a few days near the time of that February 14 meeting, had had to turn people away.

The HSW worked hard and managed to find and facilitate providers offering to open shelter locations so people can be served when weather is inhospitable. Yet, those shelters have only been made accessible just a few nights in November and January. Now here we are in February, with lows still dipping to the mid 30s and below. National Weather Service reported Bellingham lows starting February 8 through the 12th of 36, 28, 31, 41, 36. Instead of having shelters ready to get unsheltered people indoors during that time and prevent people being turned away from other facilities, The Lighthouse Mission ended up filling up part of their hallway space with mats on floors, etc.

Why aren’t we using the resources that were assembled so that we are not having a heavily burdened facility putting people in places that are not designated or ideal, or maybe even safe, for people to sleep? Why are we acting like progress has been made when people are being turned away – people are being turned away! – from an open facility because we are not being successful in providing effective access to resources we actually have?

To add to that, we have to remember that bringing people into available shelter is not only about keeping them from life-threatening circumstances during hostile weather conditions, it also creates a contact point with people who might not otherwise ever be available to be contacted. And this issue of making contact and getting to know each homeless person in a community is the foundation of many ambitious and successful efforts throughout the nation to getting unsheltered people services and housing. So beyond addressing the short-term goal of keeping people from freezing to death, this seemingly miserly way of administering shelter seems to go against the long-term goal of getting people stable and permanently housed.

This week, the National Weather Service reported Bellingham lows from the 16th through the 18th, of 36, 31, and 27.  I am calling on all members of the Homeless Strategies Workgroup to begin making the resources, which you have assembled, available and accessible during the rest of the hostile weather season. And if, for some reason those resources have disappeared, then it is vital to at least do what was done last winter, which was to have the County and City create their own shelter locations.