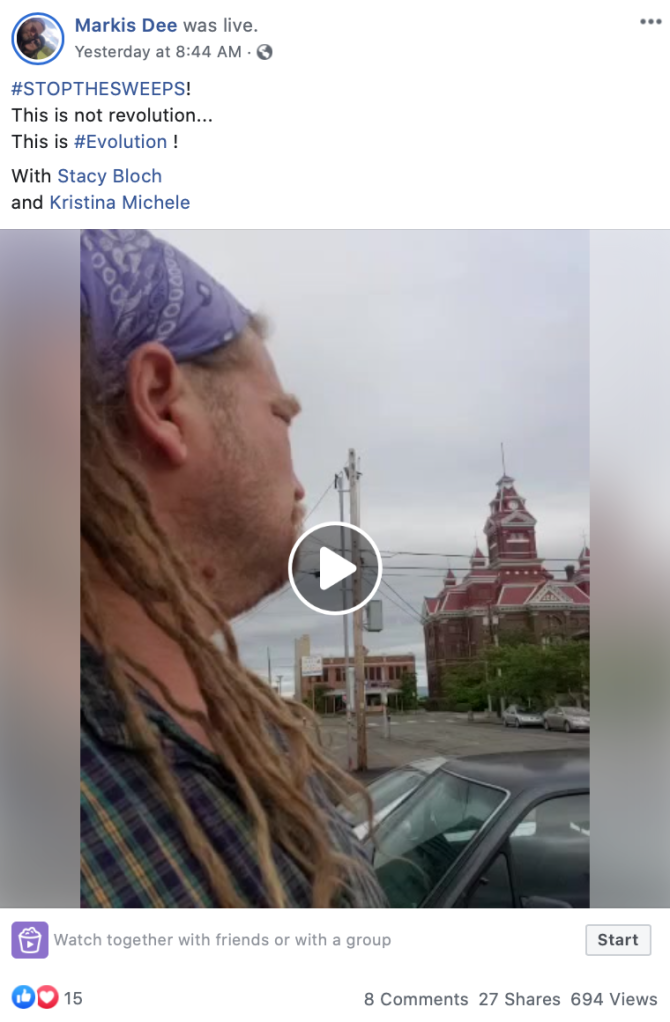 Markis Dee is calling on social justice advocacies to join together to take more powerful action to address crises we are facing. Along with that, he reminds us that individuals who care can demand action regarding defunding the police and he has a specific call for reallocating funds from homeless camp sweeps to sheltering.

Here are some notes from his video:

Markis has spoken often at Bellingham City Council meetings about reappropriating money from homeless camp sweeps, or clean-ups as the City calls them, to sheltering in Bellingham. He has also called for this in Whatcom County’s Homeless Strategies Workgroup. He has been asking for this for some time.

Recently Markis asked if he could come out and observe a day when police were going out to move people on from their camps.

It was an eye-opener for him and he was able to open some eyes there too. One of the things that is going on is that the police who are doing the enforcement, doing the clean-ups on the ground – who Markis says are are nice folks that are just following orders – one thing that they are doing is that they are following a backlog of sweeps that they didn’t do from the moment in time, due to COVID-19, when they didn’t shut down the sweeps, or clean-ups.

During the late March Homeless Strategies Workgroup meeting, which is one in which they were dealing with how our community was going to deal with the COVID-19 crisis. In that meeting the Health Department representative, Ann Deacon, spoke up and indicated that the safest unsheltered people in Whatcom County are the ones that are camping. They are safest in their camps. They were safer outside than at the Drop-In Center.  It was recommended that they be left in place. Deputy Chief Flo Simon at that same HSW meeting indicated that the police would observe that and won’t be sweeping, and hadn’t been sweeping. This was for a period of about three weeks and then Markis says that the sweeps started up again.

Those officers shared with Markis that they had never heard that the health department had made the recommendation that those campers stay in place. These are the officers who are making the actual contact with the campers and moving them along.

When Markis found out they were sweeping, he spoke to Bellingham Police Chief Doll specifically and he wanted to make it perfectly clear to Markis that there’s no camping in our parks, period. People will be moved along quickly. And anybody else who’s camping, who has a real health issue around them like feces or needles, then they’ll be moved along. Everybody else is getting to stay in place.

But Markis says, if that was the policy, it didn’t get transferred out to the ground level. Officers are going down the list of every complaint and sweeping. Markis wants to find out more and hopes the police will ask him back out to observe again. He says maybe up to nine people were employed for the full day of moving people on from their camps. There were six camps, three of which were occupied, and five or six people were displaced, left to potentially be displaced at the next sweep.

When sweeps are done, displaced people get into trouble sometimes too.

“During COVID-19 crisis, is there a time to move to reallocating money from sweeps? Yes there is. The time is now, actually. We’re in this crisis. Everything our group has ever done in this town has been during an emergency. We’re in an emergency now. One of our greatly, greatly disenfranchised groups, in our community and across America, deserves a better shot right now. There’s federal COVID-19 dollars in your county and there’s 200 people who are getting benefit with the Drop-In Center movement and all that, and another five to six hundred people in the county who aren’t getting anything.