Do you want your Bellingham Port Commissioners to be focused on listening to you, or to be offering corporations and developers the upper hand?

As we head into the primary elections, I decided to re-visit some of my older articles and comment posts to remind people why Gary Jensen should not be elected for Bellingham Port Commissioner. . .or for any other elected office. Today’s reason:

In early 2013, the group I am part of, Save Birch Bay, gave a presentation regarding impacts to water from the proposed Gateway Pacific Terminal to the Ferndale City Council. Below, are email communications obtained from the City of Ferndale.

One email was sent to me on January 8, 2013 from then-City Clerk for Ferndale, Sam Taylor, about scheduling Save Birch Bay’s presentation for January 21.

What was clear to me from the communications shown below was the extent of detailed effort Mayor Gary Jensen has put into aiding SSA Marine in its endeavor to build and run a 48 million ton per year coal export terminal at Cherry Point.

After then-City Clerk Sam Taylor sent his January 8 email to me (which he copied Mayor Jensen on) with a schedule date for Save Birch Bay to present at the City Council meeting, it only took Mayor Jensen 11 minutes to send an email to SSA Marine’s paid spokesperson for GPT, Craig Cole, about our group’s presentation date.

Mayor Jensen, in his allegiance to SSA Marine and its GPT project, immediately alerted Craig Cole to the fact that our group would give a presentation to the City Council, and asked Cole if he wanted to “come watch and listen.”

Why is an elected official acting like a corporate liaison?

The email communications are below:

Hi Sandy, I apologize for not getting back to you yet. I spoke with Mayor
Jensen who welcomed your presentation. We’d be able to provide you with 15 minutes at the next City Council meeting on January 21 at 6 p.m. I have
CCd City Administrator Greg Young on this email, as well as the mayor, so
he is aware.

Want to come watch and listen?

I think we should let them have their time. We can come back to address
issues at your command.

That works, stay in touch. 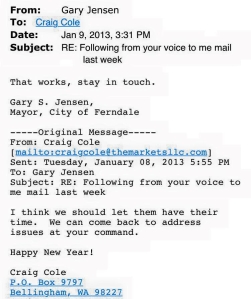