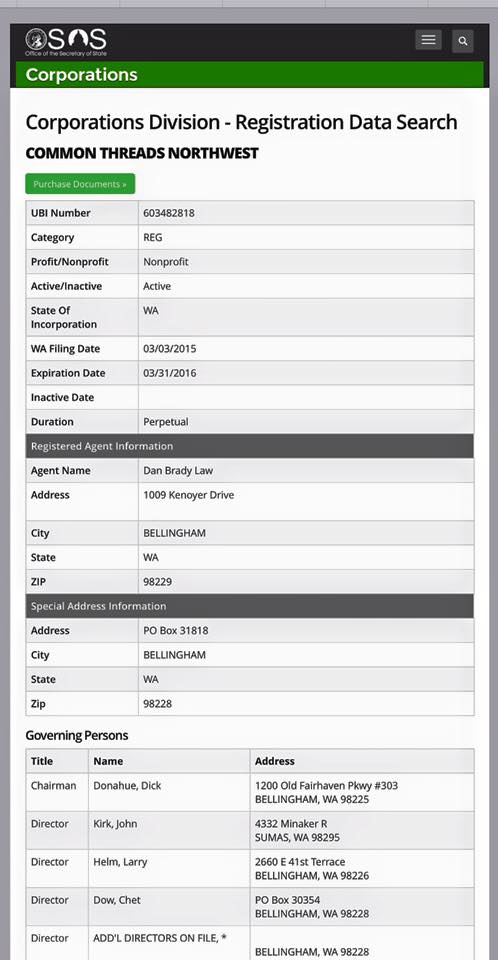 On September 10, 2015 a hearing was held at Skagit County Superior Court in Mount Vernon, regarding a lawsuit filed by Common Threads Northwest (Plaintiff) against Whatcom County (Defendant).

There were numerous motions for summary judgements by the Plaintiff/Common Threads NW relating to the proposed “Five Fair and Equal Districts” County Charter amendment that will be a proposition on the November ballot for the voters in Whatcom County. The proposition (#9 on the ballot) would allow Whatcom County voters to decide whether they want five voting districts instead of the current three voting districts.

At the conclusion of the hearing, each of the motions for summary judgement filed by attorney C. Tom Moser, on behalf of his client Common Threads Northwest, were denied by Skagit County Judge Michael Rickert.

Representing Whatcom County, was Whatcom County Deputy Prosecuting Attorney Karen Frakes. There was also an intervenor in the lawsuit; Fair Representation for Whatcom, and former mayor of Bellingham Tim Douglas, who had brought forth the “Five Fair and Equal Districts” amendment to the County Charter that the County Council approved and placed, via ordinance #2015-029, on the November ballot. Fair Representation for Whatcom and Tim Douglas were represented by their own attorney, Knoll Lowney, partner at Smith & Lowney, PLLC, in Seattle. The link to that ordinance is:
http://documents.whatcomcounty.us/weblink8/0/doc/3417105/Page1.aspx?searchid=64a82fce-3207-4e5c-965f-fbbcae09c45e

Common Threads Northwest is a local Whatcom County group which calls itself a “public interest group,” on its website. The non-profit group filed on March 3, 2015, with the Secretary of State. According to the filing, the group’s listed directors are: Chet Dow, Larry Helm, and John Kirk. Common Threads Northwest’s Chairman is Dick Donahue. 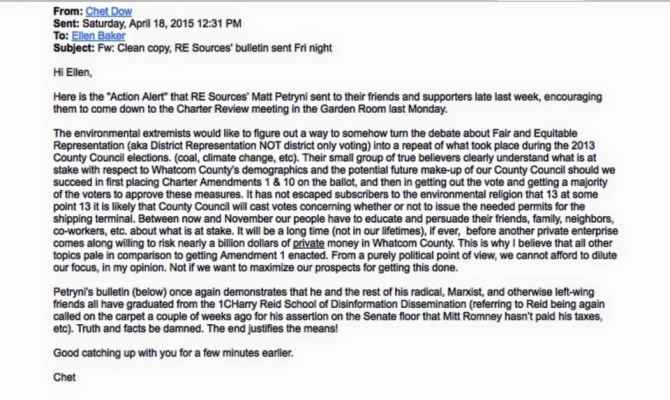 –Chet Dow is currently a Whatcom County Charter Review Commissioner and an Executive Board member of the Whatcom Republican Party. Dow was listed as a Committee Officer on the September 16, 2013 registration form for the coal terminal-funded Whatcom First PAC which was an affiliated PAC with the Gateway Pacific coal terminal-funded SAVEWhatcom PAC. During the 2013 Whatcom County elections, according to the Washington Public Disclosure Commission (PDC) website, SSA/PIT, BNSF, coal companies and coal terminal interests dumped $149,000 into the affiliated pro-coal terminal SAVEWhatcom and Whatcom First affiliated PACs. 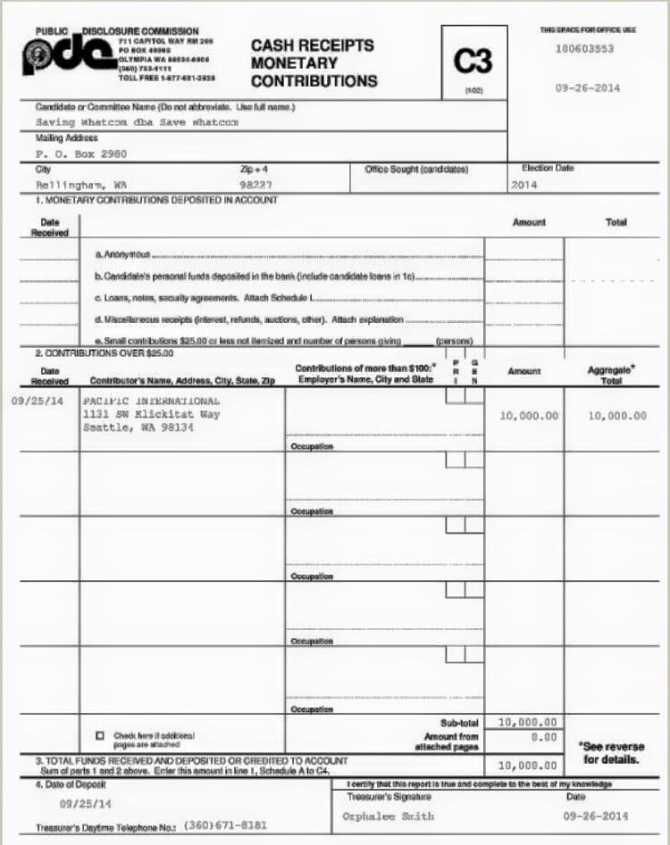 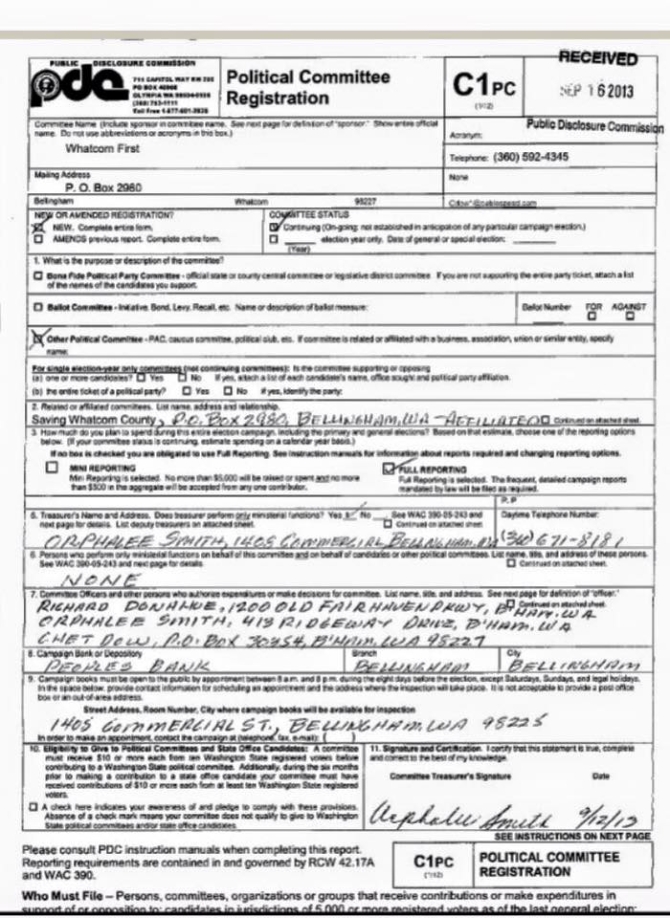 –Dick Donahue is a Bellingham financial planner, and talk radio host for the weekly Wealth Wake Up program on KGMI radio. He has been a big supporter of Gateway Pacific coal terminal, and has used his KGMI radio show on numerous occasions to promote the project. Donahue was also listed on the September 16, 2013 registration form as a Committee Officer (later amended on October 17, 2013 to Campaign Manager) for the coal terminal-funded Whatcom First PAC. His name was removed from Whatcom First’s PAC registration form that was amended on February 24, 2015. Donahue ran, unsuccessfully, for a Charter Review Commissioner seat in the 2014 election.

–Larry Helm ran, unsuccessfully, for a Charter Review Commissioner seat in the 2014 election, and is currently a Whatcom County Conservation District Supervisor. Helm is an Executive Board member of the Whatcom Republican Party.

–John Kirk is author of the local conservative blog “Whatcom Works” (registered by Kirk in June 2013), is very active in local politics. He was also actively involved with the Charter Review Commission process. His Charter Commission efforts included helping to author a Charter amendment targeting the funding of Whatcom County environmental non-profits.

Three of the four listed principals for Common Threads Northwest have connections to GPT applicant SSA Marine/PIT’s campaign contributions. Two of those three principals, Dow and Donahue, were directly involved in a PAC which received $149,000 funding from GPT applicants SSA Marine/PIT and BNSF, and coal companies and coal terminal interests.

The SAVEWhatcom PAC and its affiliated WhatcomFirst PAC were formed in August and September 2013 for the November Whatcom County Council election that year. The two PACs were strong advocates for the GPT project, and in 2013. These dual PACs’ efforts were primarily focused on attempting to get a slate of four conservative county council candidates elected who were thought most likely to approve permit/s needed for GPT. Those efforts proved unsuccessful as the four conservative candidates for County Council lost to the four progressive candidates who opposed them in that race.

In the next general election for Whatcom County in 2014, according to PDC online reports, every single conservative candidate running for the Charter Review Commission received the benefit of independent expenditure advertising from the pro-GPT SAVEWhatcom/Whatcom First PACs. This contribution revealed SSA/PIT’s effort to ensure that the 2014 county Charter Review election would result in a conservative and likely pro-GPT majority on the commission. That effort proved successful because eight conservative candidates were elected to serve on the 2015 commission.

The conservative majority of the Charter Review Commission proposed and approved Charter amendments (now propositions 1, 2 and 3 on the November ballot) specifically aimed at changing the current system of countywide voting for County Council members to district-only voting, and mechanisms with which to potentially enable the locking-in of that voting system for the next 10+ years. If that were to happen, there is a much greater chance of having a conservative majority on the County Council, and the Council would be making a decision on one of the permits needed for the coal terminal project.

The “Five Fair and Equal Districts” proposition is a response by citizens, to this attempt at a potential prolonged power grab in Whatcom County elections, by the GPT-funded Charter Commission’s conservative majority. Even when citizens in Whatcom want to offer a choice on the November ballot for voters to decide, Common Threads NW, which appears to amount to a group of four principals, three of whom have connections to GPT-funded political action committees, tried to deny voters that choice via this frivolous lawsuit.

Superior Court judge Michael Rickert concluded, after carefully weighing evidence presented to him, that the voters in Whatcom County should be allowed an opportunity to vote on the “Five Fair and Equal Districts” proposition that was legally placed by the County Council, on the November ballot.

On a related note, some people (myself included) have speculated as to why the lawsuit was filed in Skagit County rather than Whatcom. A Whatcom County legal expert explained to me on Thursday, September 10, that it is not unusual for a lawsuit against a county to be filed outside that county.

In cases like this, involving a lawsuit against a county, the party filing the lawsuit has the option of filing their lawsuit in Skagit, for instance. The thinking in doing that is likely that even though our county judges are paid through the state, their budgets are determined by the County Council, so while that legal expert (referenced above) certainly does not think that the judges here in Whatcom would ever let that influence them, the thinking is that often people filing a lawsuit think it’s safer/better to file cases involving the county, down in another county—the perception being that there possibly could be a bias toward Whatcom County if the case was heard in Whatcom County.