The quote from Commissioner Chet Dow’s April 18, 2015 email, cited by Ralph Schwartz in an October 14 Bellingham Herald article is missing what I believe to be the most critical part of the entire email. 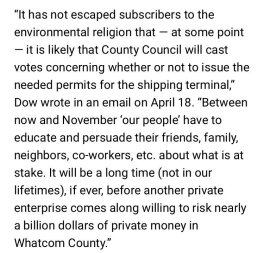 It is a critical part of the context for that email. Mr. Schwartz left off the last 3 sentences of the paragraph he quoted. I really don’t understand how this part of the quote could be left off:

“This is why I believe that all other topics pale in comparison to getting Amendment 1 enacted. From a purely political point of view, we cannot afford to dilute our focus, in my opinion. Not if we want to maximize our prospects for getting this done.”

Below, is the full paragraph from Commissioner Dow’s April 18 email.

[Referring to those whom Mr. Dow called “extreme environmentalists” in his email, he wrote]:

“Their small group of true believers clearly understand what is at stake with respect to Whatcom County’s demographics and the potential future make-up of our County Council should we succeed in first placing Charter Amendments 1 & 10 on the ballot, and then in getting out the vote and getting a majority of the voters to approve these measures. It has not escaped subscribers to the environmental religion that at some point it is likely that County Council will cast votes concerning whether or not to issue the needed permits for the shipping terminal. Between now and November our people have to educate and persuade their friends, family, neighbors, co-workers, etc. about what is at stake. It will be a long time (not in our lifetimes), if ever, before another private enterprise comes along willing to risk nearly a billion dollars of private money in Whatcom County. This is why I believe that all other topics pale in comparison to getting Amendment 1 enacted. From a purely political point of view, we cannot afford to dilute our focus, in my opinion. Not if we want to maximize our prospects for getting this done.”

***The first photo attached is the full paragraph quote from Dow. The second photo is the quote used in the Herald which omits the last three sentences of that paragraph***

On a related note, the article also stated: “In the roughly 200 emails Dow released in response to a public-records request, he says hardly anything else about the coal terminal.”

Not only does Commissioner Dow say that the Gateway Pacific coal terminal project is the reason for the focus on Amendment 1, he also goes into the detail behind his reasoning. That April 18 email packs quite a wallop and I really don’t think there needs to be much more than that statement he made right there in his email. It pretty much sums things up. How many more times does he need to repeat that?

Plus, the Herald article made no mention of the fact that Commissioner Dow was communicating via email with SSA Marine’s consultant on the GPT project (since 2013), Dave Brumbaugh, who advised Dow on matters related to Proposition 1 district-only voting in emails.