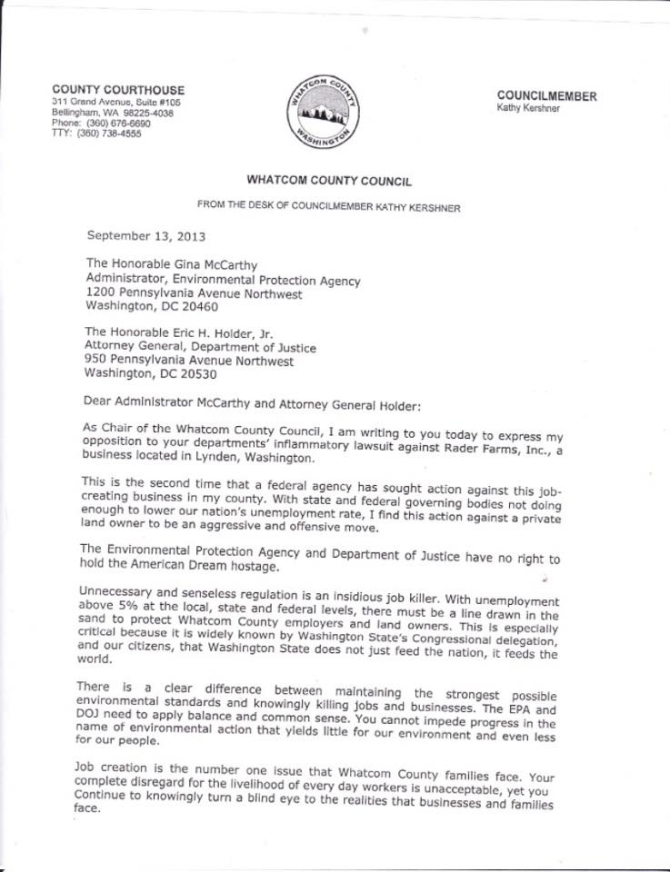 I voted for Satpal Sidhu for County Council. I recommend that you do too. Not only do I believe he makes a very good County Council member, but I believe his opponent, Kathy Kershner would seriously imperil our water quality and environment if she were to be elected.

Here is one example of how Ms. Kershner was willing to put our County’s water quality at risk when she last served on our County Council. 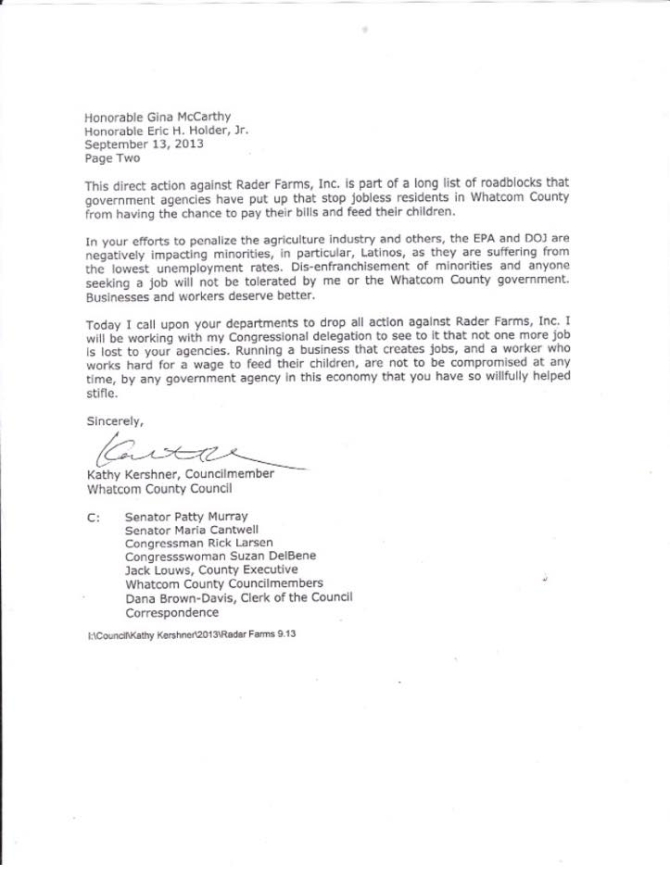 In 2013, when Kathy Kershner was a Whatcom County Councilmember and Chair of the Council, she sent a September 13, 2013 letter (shown in photos) to the Department of Justice and the Environmental Protection Agency, asking them to drop the lawsuit the agencies had filed in 2013 against Rader Farms in Lynden, for its farming operation’s violation of the Clean Water Act, stemming from Rader Farms illegally clearing Category 1 wetlands in 2005, without getting a permit or submitting a plan to Whatcom County. It is worth noting that Sue Rader contributed $900 to Kathy Kershner’s 2013 election campaign on October 28, 2013.

Ms. Kershner wrote in her letter to the DOJ and EPA, “this direct action against Rader Farms, Inc. is part of a long list of roadblocks that government agencies have put up that stop jobless residents in Whatcom County from having the chance to pay their bills and feed their children.” Ms. Kershner also wrote, “Unnecessary and senseless regulation is an insidious job killer”, and she called the lawsuit “inflammatory.”

So, Ms. Kershner, then Chair of the Whatcom County Council, told agencies which are entrusted to keep our environment protected and our water and air safe, not to do so.

And, Ms. Kershner used “jobs” as a justification for ignoring regulations and law. Jobs will come and go, but we only get one environment.

Ms. Kershner’s opening line of her letter (written on her County Council letterhead), started with these words: “As Chair of the Whatcom County Council.”

Ms. Kershner showed great disregard for our environment in thinking jobs trump
everything. . .even our health and safety—and she tried to use her County Council position and political influence when she asked the DOJ and EPA to disregard the law. She had also copied Senators Patty Murray and Maria Cantwell, Congressman Rick Larsen, and Congresswoman Suzan DelBene on her September 13, 2013 letter.