Politicians working on behalf of SSA Marine/Pacific International Terminals’ Gateway Pacific Coal Terminal (GPT) and coal industry interests, have managed to propose an amendment (#13) which would prohibit the denial of a permit for the construction, operation, or maintenance of an export facility until all reviews required under NEPA are complete.

That would pertain to the permit for GPT which the Lummi Nation requested back on January 5, 2015 that the U.S. Army Corps take immediate action and deny, due to the adverse impact on its Nation’s treaty rights. And, it would also pertain to the Millennium Bulk Terminal in Longview, WA.

The text of Amendment 13 and the Dec. 2, 2015 Congressional Record (page H8932) report with the discussion by three Congressmen during its consideration at yesterday’s vote, is shown in the attached screenshot photos. 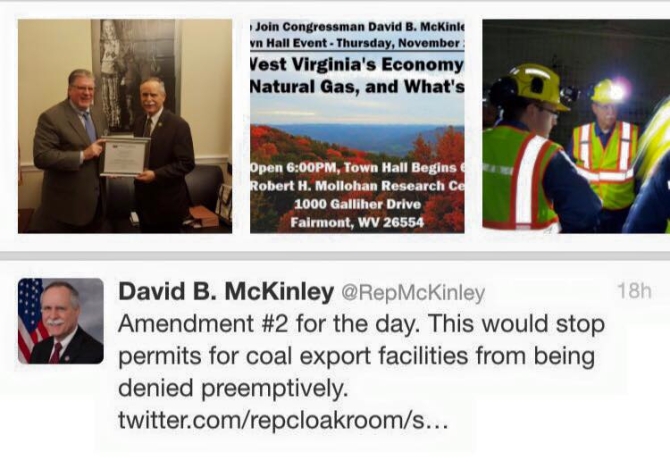 Also attached are screenshot photos of Rep. Zinke’s and Rep. McKinley’s tweets from yesterday about the amendment.

Let’s look at some of the campaign contributions for the two Congressmen who sponsored Amendment 13.

–$4,500 from Cloud Peak Energy. Cloud Peak is presently a 49% stakeholder in PIT/GPT, and has a throughput agreement to ship coal via GPT

–$4,000 from Arch Coal which is a 38% stakeholder in Millennium Bulk Terminal in Longview

–$14,200 (in 2014) from Patriot Coal which is a subsidiary of Peabody Energy. Peabody has a throughout agreement to ship coal via GPT

Now that H.R. 8 was passed today by the House, it would be a good time to start letting your Senators know that Amendment 13, named the “McKinley Amendment,” is not a piece of legislation that should be allowed to stay in H.R. 8, as it will now go to committee in the Senate (actually a number of Senate committees will review it). After committee, and any revisions from that review, H.R. 8 will eventually be voted on by the Senate. [Contact information for Senators Cantwell and Murray are at the bottom of this article]

SSA Marine VP Skip Sahlin had sent a May 8, 2015 letter to the U.S. Army Corps, asking for an extension to respond to the Lummi Nation’s assertion that GPT and its associated vessel traffic (974 vessel transits annually) would interfere and impinge on the Nation’s treaty-protected fishing rights.

In his letter, Sahlin wrote: “As you know, we [SSA Marine/PIT] are not in any way impacting the Lummi Nation’s fishing rights today. Nor will we be impacting them during deliberations on these issues. There is no harm to the Lummi Nation in allowing us sufficient opportunity to gather the facts that we want to put before the Corps of Engineers. There is no need for a rush to judgement.”

This latest amendment proposed by McKinley and Zinke that passed yesterday, and a similar amendment proposed this summer by Senator Steve Daines (R-MT) that was eventually withdrawn, clearly show that the treaty rights of the Lummi Nation are under attack. Their Nation has had to expend untold efforts to defend those rights secured to them in 1855 by the United States. Every day that passes as the Army Corps is making its decision on the fate of the GPT permit, is another opportunity for coal-backed legislators such as Senator Daines and Congressman Zinke to craft legislation aimed at diminishing Lummi Nation’s treaty rights.

Reasonable persons would conclude that despite Mr. Sahlin’s claim to the contrary, harm has been done to the Lummi Nation each day that has passed since February 2011, when SSA Marine/PIT first submitted the application for its proposed GPT project to Whatcom County’s planning department.

Contact information for Washington state Senators to tell them Amendment 13, named the “McKinley Amendment,” is not a piece of legislation that should be allowed to stay in H.R. 8 :

Contact information for the U.S. Army Corps of Engineers to let them know that we want them to Honor The Treaty of Point Elliott and that we support the Lummi Nation’s January 2015 request that the Corps take immediate action to deny the GPT permit:

Contact information for Representative Frank Pallone to thank him for opposing Amendment 13 during the vote in the House: