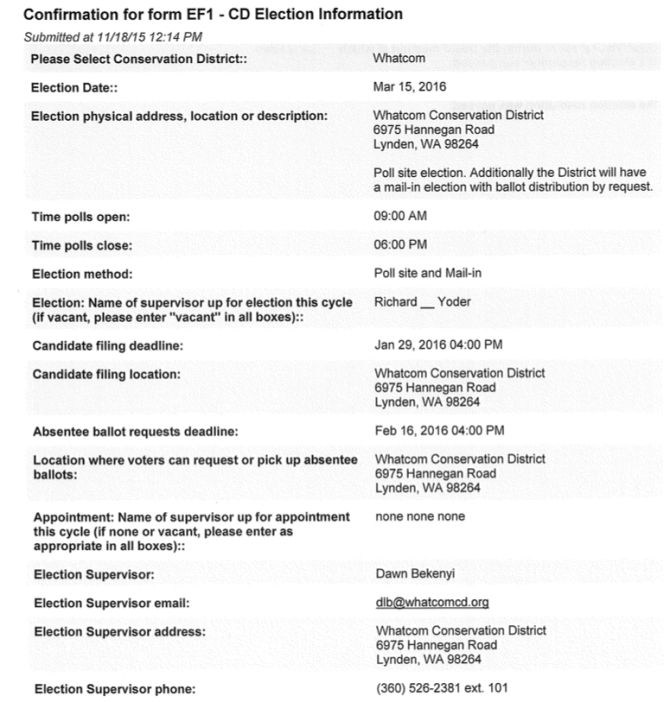 Already The Bellingham Herald has had, hiding in their October, November, and December 2015 issues, three ads costing $125 each. The ads tell Whatcom citizens about the Whatcom Conservation District (WCD) 2016 election for a Board Supervisor. Essential information about Candidates and voters (any Whatcom registered voter may submit a ballot. More info is at the end of this piece and on WCD website.

The first major problem is no one is running as of yet. Interestingly two out of three of the supervisors on the board must be land owners; however there are already two landowners, so the new position does not require that the candidate own land or operate a farm. Hurray!! – that means any registered voter may run .

This writer hopes that the new candidate will be a farm worker or pro tribal person who can make comments about pesticides, pay and/ or other topics of progressive concern. It is time progressives share their voice with the land and farm owners. Maybe a farm worker could even be able to change the RCW 8903 requirement that two board members must own land.

Anyone desiring to run must fill out paperwork they can find on the WCD website and/or at the office on 6975 Hannegan Road, Lynden.

Twenty five supporting people must sign their documentation to run. The paperwork and signatures will enable the candidate to be a “declared candidate” whose name is on the ballot. The filing deadline is January 29, 2016 at 4 pm. Form PF-A Candidate Information for the Office of Elected Supervisor, Form PF-B Nomination Petition for Elected Supervisor & Candidate Statement Policy)

If candidates are somewhat late but have submitted the paperwork and the necessary signatures, their names will not be on the ballot but any votes will be counted. Check with the district office to be sure their paperwork will be accepted.

If candidates fail to submit paperwork and/or do not have the 25 signatures, their names will not be on the ballot and any write in votes will not be counted.

The current man serving the position is not well and undecided about running. Anyone running needs to be certain that there is not more than one progressive running or the Tea Party candidate will most likely win.

Thankfully, after all the complaints about the ballot counting in 2012 and 2014, this year, rather than volunteer ballot counters, the Whatcom County auditor will be assisting with the counting of ballots.

Other than counting the ballots, another problem in the past was that not everyone requesting a ballot got their ballot in the mail. It seemed that voters coming to the center did not have their voter registration checked, but the mail-in voters had to fill out specifics about their voter registration and they appear to have to do this year also. Please keep copies of your requests for a ballot so that any problem may be fixed. A past Bellingham mayor, city council member, and current news outlet editor did not receive their ballots and did have to drive to the Hannegan office to vote where their voter registration was not checked. By the way, there are not busses going to the center, so voters must drive or walk a goodly distance.

The district office will be open Tuesday, March 15, 2016 between 9 am and 6 p.m. for voters to submit ballots at the WCD Hannegan center.

Registered Whatcom county voters may also vote by mail. They must request ballots no later than 4 p.m. on February 16, 2016.

The election for the one seat on the District Board will be held on Tuesday, March 15, 2016 at the District’s office at 6975 Hannegan Road, Lynden. Polls will be open between 9:00 am and 6:00 pm.   All registered voters residing within Whatcom County may vote in person at that date, place, and time OR by mail.  Mail-in ballots are only available upon request which must be made no later than 4:00 pm on February 16, 2016.

Requests for mail-in ballots, candidate filing materials, or other election information can be made on-line, by phone (360-526-2381 x 101) or at the District office.

Be ready: with this Info: Your voter registration card: First Name , Your middle initial, Your Last Name and any Alternative names, Your Mailing Address, City and State, and Zip code as it appears on the Whatcom County Voter Registration List. Also helpful is “Your Full Alternate Address (not mailing) that may help the district find you on the Whatcom County Voter Registration List.” If you do not receive your ballot , call the office. Balllots must be returned to the District office on 6975 Hannegan Road by Tuesday, March 15, 2016.

Please vote in this hidden election.