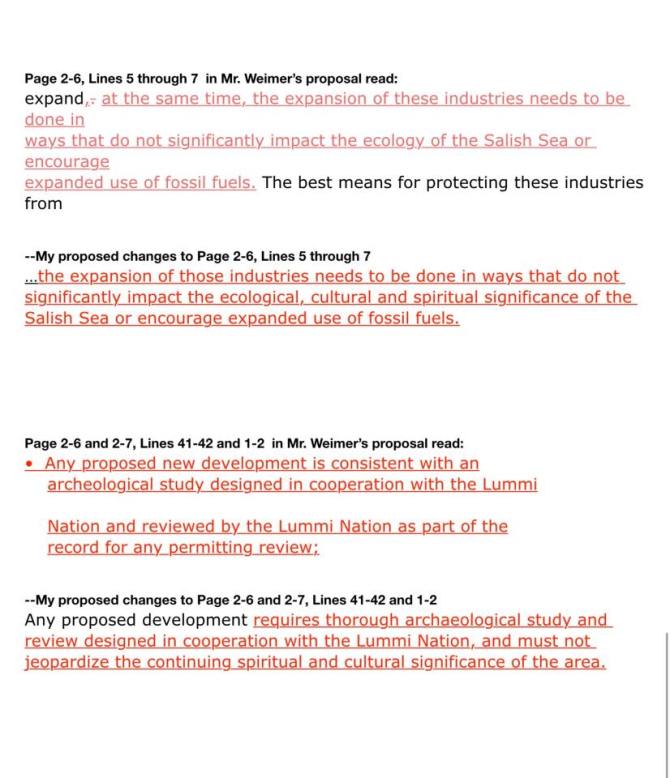 I hope those of you reading this post will review the changes I proposed to our County’s Comprehensive Plan relating to Council member Carl Weimer’s proposed changes (in Chapter 2), and if you agree that the changes I suggested would be important to include in our County Comp Plan, I encourage you to submit a comment to the County Council [at council@co.whatcom.wa.us ] supporting my suggested changes. The next Council meeting at which Council member Weimer’s proposed changes will be considered is July 12th.

Overall, I believe Mr. Weimer’s proposed changes are very important and positive, and would be prudent to include in our County’s Comp Plan.

However, after reviewing Mr. Weimer’s proposed changes, I believe that a number of changes would further strengthen his proposal in some ways that I believe are significant, especially in terms of impacts to the Lummi Nation from Cherry Point heavy industrial development, so I submitted the public comment (shown in the screenshot photos I’ve attached. [you can click on any one of the images to access them in an enlarged format and you can page through to see the other document images]) to the County Council with my suggested edits. The link to my comment posted on the County website is:
http://wa-whatcomcounty.civicplus.com/DocumentCenter/…/19529 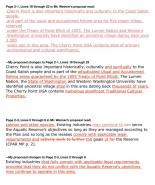 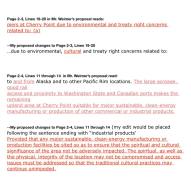 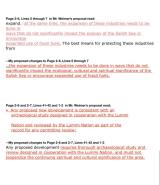 The edits I have suggested, I believe, fortify Mr. Weimer’s important proposed changes to Chapter 2, and seek to meet our County’s legal and moral obligation to the Coast Salish people, to protect Cherry Point.

Cherry Point is home to a significant environmental resource and unique aquatic ecosystem in the Strait of Georgia. The Cherry Point Aquatic Reserve Management Plan, aimed at protecting the health and aquatic environment of Cherry Point, is a 90-year plan that was put into place in 2000 by the Washington State Department of Natural Resources. The plan states the Cherry Point Aquatic Reserve’s “marine waters and aquatic lands are a portion of Treaty-protected Usual and Accustomed grounds and stations of local Native American Indians, and are used by the Indians for commercial, ceremonial, and subsistence purposes.” The Lummi are signatories to the 1855 Treaty of Point Elliott.

Because Cherry Point is important historically, culturally and spiritually to the Coast Salish people and is part of the adjudicated Usual and Accustomed fishing areas guaranteed by the 1855 Treaty of Point Elliott, it is our federal, state, and local governments’ legal and moral obligation to protect Cherry Point. The language in our County Comprehensive Plan’s Chapter 2 Land Use, Major Industrial Urban Growth Area / Port Industrial, Cherry Point, needs to be structured in such a manner that the Comp Plan’s policy guidelines mandate the level of protection necessary for Cherry Point.