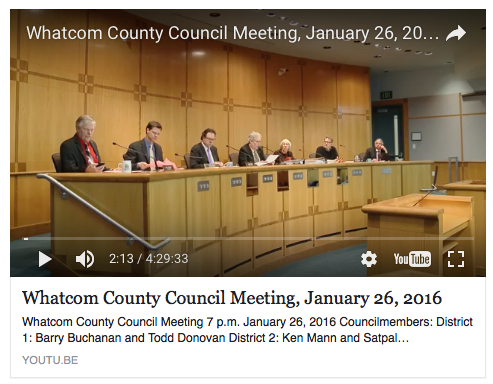 January 26, 2016. Remember that date because that is the day that the general public, the Lummi Nation, the Suquamish Indian Tribe, the Swinomish Indian Tribal Community and Tulalip Tribes (which submitted Comp Plan Update comments on Cherry Point UGA), and our County Council, were stopped from fully participating, or even participating at any acceptable level, in the County Comp Plan Update process as it relates to Cherry Point UGA.

Although, I don’t think people were fully aware of what was happening that night, on January 26th, during the regular County Council meeting held in the evening. At least, I wasn’t fully aware until today.

After submitting multiple public comments recently about problems with the Comprehensive (Comp) Plan Update process which came to a boiling point after Council member Carl Weimer proposed amendments to Chapter 2 Land Use Cherry Point UGA in late June, I decided to review the video recording of the January 26, 2016, regular County Council meeting, at which, the first Comp Plan Update Public Hearing was held. I wanted to go back and listen to the announcement by Council Chair Barry Buchanan prior to that Public Hearing on the Comp Plan.

I attended that meeting, and so did about 200-300 others. I remember being anxious because it was so crowded waiting in the lobby to get inside the Council chambers—we were waiting for the doors to be unlocked. I was one of the first six or so people standing in front of the doors. The very first person was Brad Owens, President of the Northwest Jobs Alliance, an advocacy entity created to market the Gateway Pacific Terminal (GPT) project at Cherry Point. He had a box full of buttons he was handing out which featured some slogan I don’t remember with the word “jobs” in it.

Once inside, the chambers filled quickly. There were no seats left and people were standing in the back behind the seats, smashed-in like sardines. I was in the back.
I struggled to “maintain” so-to-speak, because I really do not like crowded areas, so I didn’t get to hear all that was said by Council Chair Barry Buchanan at the beginning of the meeting. I was trying to talk myself into staying in the chambers and not leaving, but in struggling through that thought process, I missed some of the statement read by Council Chair Buchanan, and the statement from Senior Deputy Attorney Karen Frakes, prior to the opening of the Public Hearing on the Comp Plan. I heard bits and pieces, but boy, did I miss something very important that happened that night, right in front of all of us.

While close to 100 people gave testimony during the Public Hearing on the Comp Plan Update, much of that centering on Cherry Point and the December 10, 2015-proposed amendments by Lummi Nation, what most of us didn’t realize was this:
The public testimony that would be given that evening, and all the subsequent public testimony and written comments submitted to Council relating to the Cherry Point UGA, apparently would not be acted upon by Council until after the GPT process were to be completed, if Council followed the advice from their legal counsel.

Council Chair Buchanan opened the meeting, saying that Council had met that day with Senior Deputy Attorney Frakes, to discuss potential litigation on the GPT permit process with them. Below is Mr. Buchanan’s prepared statement, and a short statement by Ms. Frakes from that meeting.

Buchanan [reporting on the Committee of the Whole meetings]:
“Last item was a discussion with Senior Deputy Prosecutor Karen Frakes regarding potential litigation on the GPT permit process. And, we had a discussion on how we would kind of navigate the waters on tonight’s hearing and when we get to that point, before starting the hearing, I will be reading a statement and we’ll ask our attorney to also advise and give you all the information that she gave us.”

[At the opening of the Public Hearing on the Comp Plan Update, Buchanan read a prepared statement]

“We’ve received comments from Lummi Nation and hundreds of citizens regarding the 2016 Comp Plan Update particularly with regard to the Cherry Point UGA. After learning of the proposal from the Lummi Nation, and as Chair of the Council, I had some concerns on how we should structure tonight’s hearing on the Comprehensive Plan, as well as any government to government meeting with the tribe. I contacted our attorney Karen Frakes and we met to discuss how the Council could most successfully navigate these matters without jeopardizing our Appearance of Fairness as it pertains to the GPT permit process.

“First it was Karen’s advice that all discussion of the proposed Comp Plan amendment be on the record. This would allow the Council to very easily disclose any ex-parte information in the GPT proceeding by basically incorporating the Comp Plan amendment record into the GPT record and then allowing full opportunity for both sides to respond.

“Karen felt that it was not advisable to meet with the tribe outside of an open public meeting because it would arguably raise an Appearance of Fairness issue even if a small group of Council members participated in a closed meeting.

“Second, it was Karen’s advice that while we cannot prohibit public comment relevant to the Comp Plan amendment process, we should not be giving any feedback on this particular issue, even what one might think is a simple question from the Council could be interpreted in a way to show bias or prejudice.

“Finally, Karen does not believe that we should act on this matter, but should defer action until after the GPT process is complete. I think she wanted to add a few things to what I said.”

Council member Weimer finally felt comfortable to propose his amendments to Chapter 2 Land Use Cherry Point UGA, after the U.S. Army Corps officially denied the permit needed for GPT on May 9, 2016, and the Washington State Department of Natural Resources officially denied the lease needed for GPT on June 6, 2016. But then, after an uproar and huge pressure from Cherry Point business interests, which included GPT permit applicant SSA Marine, Council was advised by its legal counsel regarding those proposed amendments made by Mr. Weimer, during an Executive Session at a July 12 Council SCOTW meeting. After considering that legal advice and reconvening the July 12 Council SCOTW meeting, they voted (5-2) to remove those amendments from the Comp Plan Update process.

Presently, the advice from Senior Deputy Prosecutor Karen Frakes, regarding Comp Plan Update amendments relating to Cherry Point UGA matters is causing the County to be out of compliance with its own Public Participation Plan it adopted for the Comp Plan Update, and causes the County to be out of compliance pursuant to RCW 36.70A.140, and possibly other Washington state and county laws. And, that advice from Ms. Frakes seemingly ignores the called-for government to government relationship obligations with American Indian Tribes.

I believe all of this unfairly impinges on citizens’ due process rights.

The Whatcom County Council meets at 311 Grand Ave., in Bellingham.