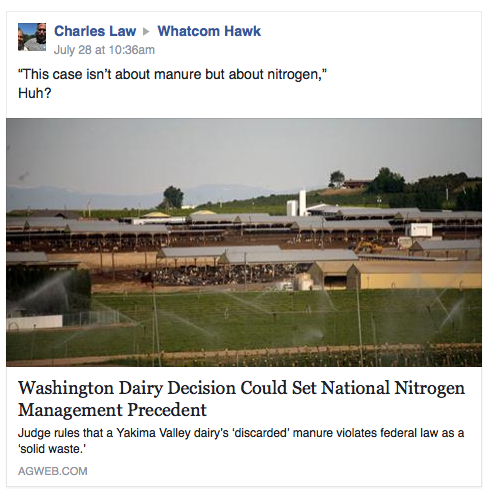 Earlier this week, Charles shared this post with us. The Cow Palace case indicated that farmers could be liable under federal law for discarding manure, which was ruled a solid waste.

That helps explain why the new proposed CAFO permit is so inadequate. One of the things that the state did was protect the farmers from personal liability for the impacts of their pollution discharges by creating a two tier permit system, with most farmers only needing a state permit. And only farmers directly discharging to a surface water source (which will be much much fewer) will become responsible under the NPDES [National Pollutant Discharge Elimination System] water permit system, which creates federal liability. It is important to tell DOE that we want to have a single permit system with farmers held liable for their actions. This is just a big game of three card monte that is being played.

I will post my written comment to DOE below. One problem with this proposal is that it overlooks the fact that most groundwater is in hydraulic continuity with surface water and you can not separate one from the other.

To DOE Staff
Re: The final draft updated CAFO permit.

I do not support the proposal to create a bifurcated permit system, with discharges to groundwater being subject only to a state permit and discharges to groundwater and surface water being subject to a state and federal permit. As discussed below, this is not supported by Best Available Science. You are the state agency that has been delegated authority to implement and enforce the Clean Water Act, and the proposed permit system does not meet requirements to protect water quality and public health. Nor does it protect ecological functions and value, such as fish and wildlife and their habitat.

Robert Hirsch, the former Chief Hydrologist for the USGS wrote “Effective policies and management practices must be built on a foundation that recognizes that surface water and ground water are simply two manifestations of a single integrated resource.” See: Ground Water And Surface Water; A Single Resource, U.S. Geological Survey Circular 1139; 1998; http://pubs.usgs.gov/circ/circ1139/#pdf.

This publication also stated that point and nonpoint sources of water contamination are common in agricultural areas where livestock are concentrated in small areas, such as feedlots. “Whether the initial contamination is present in ground water or surface water is somewhat immaterial because the close interaction of the two sometimes results in both being contaminated.” (Page 61, Circ.1139, see Boxes 0, P.)

If we are only protecting groundwater, we are not protecting surface water quality or quantity, which impacts in-stream flows for fish and wildlife. There are potential treaty right implications for a permit system that fails to consider the close relationship between ground water and surface water. See also Sustainability of Ground-Water Resources, U.S. Geological Survey Circular 1186, 1999; http://pubs.usgs.gov/circ/circ1186/pdf/circ1186.pdf where USGS states that “we emphasize that development of ground-water resources has consequences to hydrologic and related environmental systems.”

And closer to home, there have been numerous studies that establish the high degree of hydraulic continuity in Whatcom County, most of which is located within WRIA 1. A WRIA 1 Groundwater Data Assessment (Bandaragoda, C., J. Greenberg, C. Lindsay, and M. Dumas (2013) WRIA 1 Groundwater Data Assessment: Overview) determined that “[m]uch of the WRIA 1 below the confluence of the Nooksack River Forks is a groundwater‐driven water resource system” (p. 17). The Sumas-Blaine aquifer is characterized by “a relatively high degree of hydraulic connectivity or continuity between the aquifer and surface water.” A hydrograph of water levels in a well located in the upper reaches of the Bertrand Creek drainage “shows the effects of summer irrigation and indicates that the Sumas-Blaine Aquifer typically experiences roughly 5 feet of seasonal fluctuations in the upper portions of the Bertrand Creek Drainage” (p. 30).

We also know from numerous studies that pumping groundwater wells in county agricultural areas reduces the in-stream flow of the Nooksack river. The implications here are clear and obvious and reflect the most basic rule of ecosystem function. Ecosystems develop over time and are interconnected and synergistic. If you monkey with one part of the ecosystem, the result are likely to be far reaching. We need a single CAFO permit that reflects this reality. That is why I asking you to revise the proposed draft CAFO permit system to a single permit that imposes both state and federal law.