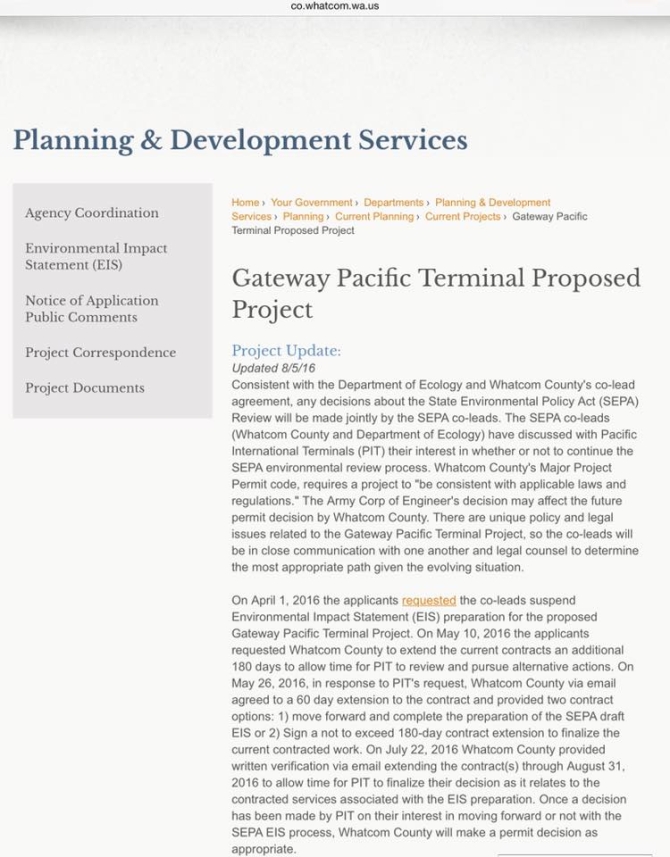 My letter today to Whatcom County…

Subject: Re: 2016 GPT correspondence and documents posted on the County website

Tyler,
I didn’t notice until re-reading your August 9, 2016 email below, that you had provided answers to the three questions I asked in my August 5, 2016 email.

I wanted to follow up regarding some of your responses. You wrote:

“The project update section above includes reference to the emails and correspondence on this subject. The email correspondence includes contractual information and will be posted to the Whatcom County website once a decision has been made by PIT to move forward or not with a contract amendment.”

The “contractual information” you reference, would likely relate to any extension to the EIS for the GPT project so I do not know why those emails and correspondence would not be already made available to the public by posting those. I do not consider the brief “recap” as you call it, to be adequate in terms of informing the public about a project of great public interest such as GPT.

Posting critical information after the fact, after decisions have already been made, is contrary to the idea of informing the public so that the public then may effectively participate in their local government before those decisions would be made so as to have a potential impact.

Furthermore, the fact that the County Administration had not been posting 2016 GPT project documents and correspondence on its GPT webpage until August 5, 2016 (with the exception of two documents that were posted), and the fact that the County continues its practice of not posting additional GPT project documents and correspondence which it currently has in its possession, could be interpreted as if the County has been withholding information from the public in order to keep the public in the dark about the EIS suspension status for the GPT project, until after decisions would have been made by County Administration.

To obscure such vital information from the public during an ongoing Comprehensive Plan Update process would be especially questionable, and potentially harmful, due to the negative ramifications that can occur from that lack of, or limited, information flow to the public from the County.

Those negative ramifications can also have long-term effects in terms of our County’s planning efforts, and issues relating to; Washington’s vested rights doctrine; local land use permit applications; compliance with state laws such as the GMA; and compatibility of development with Comprehensive Plans in Whatcom County.

Additionally, if a County Administration were to obscure vital and time-sensitive information from the public during an ongoing Comprehensive Plan Update process, that could be perceived as potentially giving an unfair advantage to a permit applicant. That unfair advantage can directly relate to vesting rights which could enable that permit applicant, let’s say for example, PIT, to submit a permit application in order to gain vesting rights under changes to local land use or zoning laws. For such a circumstance to occur, would be inimical to the public interest, and also would subvert public interest.

Also, in the “recap” on the County’s GPT webpage, it is stated that the County’s May 26, 2016 email response to PIT, the County “agreed to a 60 day extension to the contract and provided two contract options: 1) move forward and complete the preparation of the SEPA draft EIS or 2) Sign a not to exceed 180-day contract extension to finalize the current contracted work.”

I’m sure you and the County Administration are aware, and as I discussed in my August 6, 2016 email I sent you and County Executive Louws, and PDS Director Sam Ryan, there is another option that is available according to the June 12, 2012 Contract for Services Agreement between Whatcom County and CH2M Hill Engineers, Inc. for the EIS preparation for the GPT and BNSF Custer Spur Modification Project.

“The County may terminate the Agreement in whole or in part when ever the County determines, in its sole discretion, that such termination is in the interests of the county. Whenever the Agreement is terminated in accordance with this paragraph, the Consultant shall be entitled to payment for actual work performed up to the termination date at unit contract prices for completed items of work. An equitable adjustment in the contract price for partially completed items of work will be made, but such adjustment shall not include provision for loss of anticipated profit on deleted or uncompleted work. Termination of this Agreement by the County at any time during the term, whether for default or convenience, shall not constitute breach of contract by the County.”

According to the Contract for Services Agreement between Whatcom County and CH2M Hill Engineers, Inc., our County can terminate the Agreement in whole or in part whenever the County determines, in its sole discretion, that such termination is in the interests of the county.

And, according to that Agreement, “Termination of this Agreement by the County at any time during the term, whether for default or convenience, shall not constitute breach of contract by the County.”

— I further request that the County revise its GPT Project Status “recap” on its webpage to include information about the other option that the County could legally exercise immediately which is to terminate the contract agreement between Whatcom County and CH2M Hill for the EIS preparation for the GPT and BNSF Custer Spur Modification Project. The County has obligations to properly inform its citizens and I do not consider the brief and general information posted in the “recap” on the County’s GPT webpage to be adequate.

And, as I previously requested in my August 6th email, I request the County immediately terminate, for Public Convenience, its Agreement with CH2M for the EIS preparation for the GPT and BNSF Custer Spur Modification Project.

Thank you very much.
Regards,