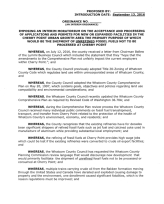 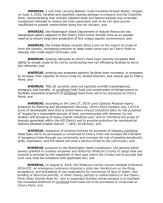 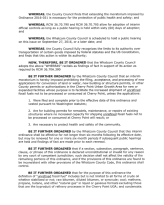 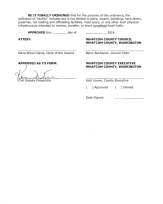 Dear Whatcom County Council:
I am writing in support of the “Ordinance imposing an interim moratorium on the acceptance and processing of applications and permits for new or expanded facilities in the Cherry Point urban growth area, the primary purpose of which would be the shipment of unrefined fossil fuels not to be processed at Cherry Point.”
I think it is important to witness that in the world around us that more and more people are taking and demanding action to fight the climate crisis we are in the midst of, and to protect the waters, lands, air, and life forms for our coming generations. I am proud to see our county council responding to this call for action in the amendments that have been drafted by Council Member Weimer for the Cherry Point UGA chapter of the Whatcom County Comprehensive Plan and by providing emergency, and now interim, protection for the critical environment and historic cultural and spiritual resources of Lummi Nation and other Coast Salish people at Cherry Point during the time those amendments will be under review.
On Thursday September 22, 2016 a signing ceremony on Musqueam land in Vancouver, Canada was held for a Treaty Alliance against Tar Sands Expansion. The treaty was signed by a combination of approximately 90 First Nations and Native American Nations.  Although the majority of Signatory Nations were from the Canadian Province of British Columbia, Lummi Nation was listed as Signatory Nation for the state of Washington.  Fossil fuel mining and export operations are an increasingly severe threat to indigenous peoples’ lands, water, and historic cultural, and spiritual resources. And many of these nations have not ceded threatened territories and/or their rights that are protected by treaties.
Here is a link to a copy of the text of the Treaty Alliance against Tar Sands Expansion, along with a link to a list of the Signatory Nations:
http://www.treatyalliance.org/wp-content/uploads/2016/09/Treaty-and-additional-information.pdf
http://www.treatyalliance.org/wp-content/uploads/2016/09/Treaty-Alliance-List-of-Signatory-Nations-Preliminary.pdf
I remind you that also on September 12, 2016 the Bellingham City Council signed a “RESOLUTION EXPRESSING CONCERN REGARDING ALLEGED VIOLATIONS OF DUE PROCESS AND LACK OF MEANINGFUL TRIBAL CONSULTATION REGARDING PERMITS FOR THE DAKOTA ACCESS PIPELINE.”  (A copy of the draft resolution is attached.) 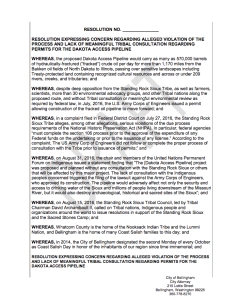 The Standing Rock Sioux Tribe of North Dakota, whose waters and sacred lands are directly effected by the Dakota Access Pipeline, is also a Signatory Nation of the Treaty Alliance against Tar Sands Expansion.
It is a time for all of us to stand in solidarity to quickly transition away from the use of fossil fuels instead of increasing the infrastructure for and expansion of them.   Please approve the Ordinance for the Interim Moratorium on council’s agenda for September 27, 2016. Also, I ask again that you draft a resolution in support of the Standing Rock Sioux Nation’s opposition to the Dakota Access Pipeline.  I cheer the council on toward joining the with governments, organizations, and individuals across the nation to become ever more active protectors of our lands, waters, air, and life forms.  I believe it is critical that being a protector of these things that we need most to survive becomes an integral and visible part our identities.
Sincerely,
Dena Jensen
Birch Bay

This letter was sent to the following addresses:

and copied to these addresses: