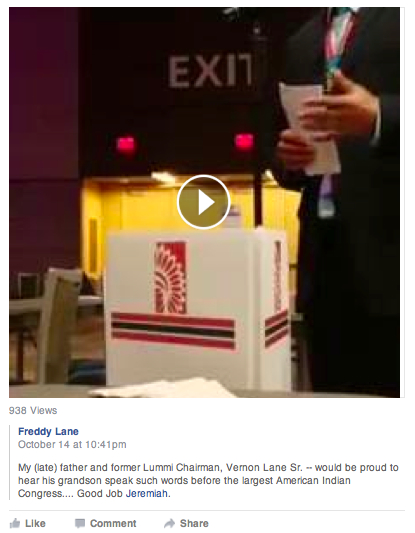 In case you can’t access the video, or you just want to consider the enlightening words at your own pace, here’s a transcript of most of [Lummi Indian Business Council member] Jay Julius’ presentation (shown in this video posted by Freddy Lane) at the National Congress of American Indians this last week:

“Not something that we can take responsibility for, and nor can any of you take personal responsibility for that solution request by us, by me. But the United States Government can. The United States Government can, through policy, Federal policy: boarding schools, termination policies. The past speaker talked about partnership. This all happened through a partnership. After the largest land, real estate transaction, took place in partnership. Yeah, it was all treaties. You guys hear that all the time: treaties, sovereignty, treaties, sovereignty, but it’s not viewed as what it really was.

“It is a partnership. And our realities – everyone here is a survivor – near extinction, most of us. Not because of our own actions. This is following treaties, this is up through the 50s and 60s and 70s. All my aunts and uncles went to boarding schools 500 miles away from our homeland, from our reservation. So, just a thought, and we entered into a treaty in 1855, Point Elliott Treaty. And I think there’s 20 plus treaties entered into in Washington State, allowing the state of Washington to become a state in 1871. We held title to every square inch of land. And it was through these treaties that this was made possible, in partnership with the tribes.

“But one example, look at – we’re talking about DAPL. We’re here because of DAPL. An EA, not even an EIS, taking your partner – your partner attacked by dogs, women and children attacked by dogs, who are trying to protect an area that is sacred to them, water that is sacred to them. And as a partner, what have you done? ‘Well, we did an EA. We didn’t think that an EIS was necessary. Now we’ve consulted with them a little bit, but hey, it’s jobs.’ What about the jobs that have been provided over the last couple of hundred years through this land transaction, this real estate deal?

“Look at the suffering these people go through. The Standing Rock people they are suffering today. They will not sleep – many of them will not sleep tonight. We just went through a five year battle at Cherry Point, adjacent to our reservation on top of one of our archeological sites and the Army Corps was very familiar. And it’s taxing. It’s tiring. It’s harmful. These mitigation measures that are put in place – 106 has no teeth. That’s why maybe an Endangered Peoples Act or an Endangered Cultures Act because if there’s Endangered Species where you propose a project, that can kill a project. But if there’s graves and sacred places to Native Americans, ‘Oh let’s just put eight feet of fill over the top of it and protect it.’ That’s our reality. That’s what we have to deal with.

“So, moving forward, none of you can take any responsibility for history. But history is what it is. And the United States fails to teach true history. The genocide, they deny the North American holocaust. But today we can move forward. Tomorrow and future generations, from this experience, this horrific nightmare that many tribes are going through, like Standing Rock. We can move forward, and we can create new policy and process, as partners, and treat each other like partners, not this paternalistic B.S. and: ‘These Indians are in the way.’ No, we’re partners.

“And we think, we know it’s time to start treating us as partners, and respecting and understanding that these treaties were important to create the states in the United States. So why not treat us with respect, and treat our ancestors and the people in the future generations with that respect? “