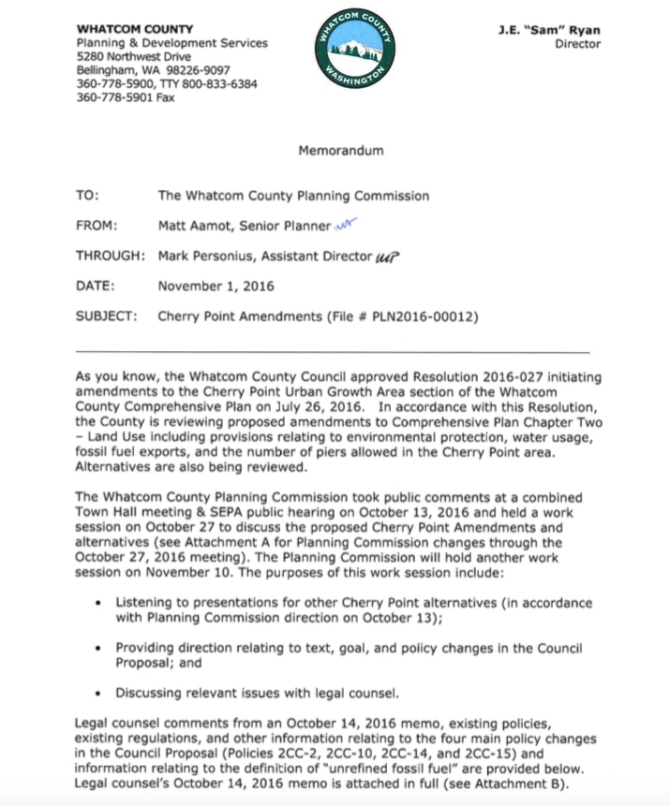 4:25am  November 5, 2016  Wendy Harris
The County Planning Commission is meeting on Thursday, the 10th, (6:30 PM in council chambers) and I was extremely disappointed to review on the agenda the ridiculous “alternative approaches” for the SEPA review, trumped up by the administration in the hopes of derailing the Weimer Cherry Point amendments.

The PC will be going over in more detail the rather poor legal advice provided by deputy prosecuting attorney Royce Buckingham. (found here: http://wa-whatcomcounty.civicplus.com/DocumentCenter/…/23617), which is also discussed in the staff report for the meeting. (found here: http://wa-whatcomcounty.civicplus.com/DocumentCenter/…/23615.)

They will be going over the Cherry Point alternative proposals, although there is no new information and analyses one would expect when reviewing a SEPA proposal and alternatives. Instead, the planning staff is extrapolating, based on their review of the original EIS, which did not address this specific issue, what they think this means in terms of environmental impact. The whole process is just made-up because the county knows they can get away with it under very lax SEPA standards.

The idea that the Weimer amendments are regulations instead of policies because they prohibit certain actions carries no weight. The comprehensive plan is the generalized coordinated land use policy statement adopted by a jurisdiction which will be used to guide its land use decisions well into the future. It has been described as a “blueprint” or “guide” for all future development. Barrie v. Kitsap County, 93 Wn.2d 843 (1980). Of course it is not impermissible to be proscriptive. In fact, the Department of Commerce posts on its website what it considers to be the very best comp. plans, including one from Redmond which states “NE-29: strictly limit disturbance in a landslide area”, and NE-40: “Prohibit discharge of wastewater…..”

The county’s position that the 1999 settlement is still valid would not likely be accepted by the hearings board or superior court. SSA/PIT was required to submit a new application. Would that not extinguish the 1999 settlement, assuming it was still valid, or does the county actually assert that SSA held rights under both applications at the same time? Would it be able to move forward with the 1999 application after the 2012 application was approved? How nonsensical is that? The settlement language clearly anticipated on-going studies that would be commenced shortly because the settlement speaks to monitoring and reporting requirements. By failing to engage in the required follow-up work, SSA abandoned any rights that it held. The law does not favor people/entities that sit on their rights and then assert these rights decades later.

Mr. Buckingham is equally incorrect when he lists the commerce clause as a potential problem. He does so by citing a case that is factually distinct from the situation we are reviewing at Cherry Point. In the case cited by Buckingham, the state attempted to use its police powers to improperly limit interstate commerce in favor of local business. That is indeed a violation of the commerce clause. But where a jurisdiction uses its police powers to protect public health and safety in a manner that does not discriminate against out of state business and the public interest in not competely outweighed by the value of the interstate business, it will almost always be upheld.

A frequently cited example of the deference afforded to the powers of state and local government may be found in Exxon Corp. v. Maryland, 437 U.S. 117 (1978), where the State of Maryland barred producers of petroleum products from operating retail service stations in the state. It is difficult to imagine a regimen which might have greater impact on the way in which markets are organized. Yet, the Court found the legislation constitutionally permitted: “The fact that the burden of a state regulation falls on some interstate companies does not, by itself establish a claim of discrimination against interstate commerce,” the Court wrote. The “Clause protects interstate market, not particular interstate firms, from prohibitive or burdensome regulations.”

Similarly, in Minnesota v. Clover Leaf Creamery Co., 449 U.S. 456 (1981) the Court upheld a state law that banned nonreturnable milk containers made of plastic, but permitted other nonreturnable milk containers. The Court found that the existence of a burden on out-of-state plastic industry was not ‘clearly excessive’ in comparison to the state’s interest in promoting conservation.

In Bibb v. Navajo Freight Lines, 359 U.S. 520, 524 (1959), the United States Supreme Court stated: ‘These safety measures carry a strong presumption of validity when challenged in court. If there are alternative ways of solving a problem, we do not sit to determine which of them is best suited to achieve a valid state objective. Policy decisions are for the state legislature, absent federal entry into the field. Unless we can conclude on the whole record that “the total effect of the law as a safety measure in reducing accidents and casualties is so slight or problematical as not to outweigh the national interest in keeping interstate commerce free from interferences which seriously impede it” we must uphold the statute.

The Magnuson Act is equally inapplicable,but I will tackle that later or someone else can. The main point here is that I want you to look at the complexities and confusion that have been created from the administration severing the Weimer amendments from the comp. plan and trumping up a SEPA review with some made up alternatives. How many complex arguments must be now navigate, all of which were completely unnecessary. Why are we wasting time, money and resources on this kind of frivolous debate? (Yes, of course we all know why. Louws wants to see that terminal be built.)

The council should never have approved this. A real issue that has never been addressed is the fact that there is still no public disclosure of why this was done. If the basis was the same things that Buckingham is raising, than the litigation privilege has been waived and can be discussed. How does this comply with the GMA goal of public process when the public was cut out of the loop and not allowed to comment?. I can not think of one reason why a “severance” from the comp plan was appropriate other than more delay and bad faith tactics from our executive and his staff.