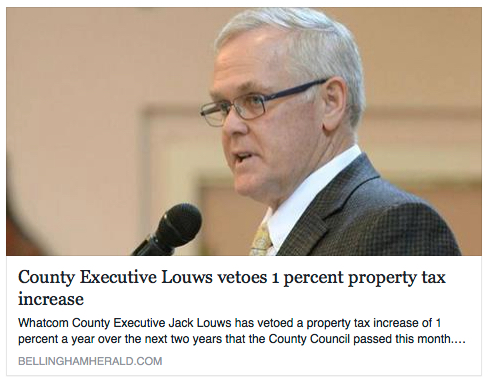 According to Louws, the primary reason he vetoed the budget was
the $150,000 set aside for independent legal review of the options available to county council to control the export of unrefined fossil fuel from Cherry Point.

“This expenditure does not reflect my concern for the entirety of our citizens and is not, in my opinion, necessary,” Louws said. “Specific land use regulations developed within the county’s scope of authority do not need outside legal review costing $150,000.”

Hmmmm… how much did Jack authorize in legal fees to fight the Hirst case? It was a lot more than $150,000. How much will it cost if the county is sued over the increasing poor judgement and covert actions taken by his administration to save GPT and prevent any new restrictions for Cherry Point?

We are talking about a $195 million dollar budget and Jack is really holding the whole thing up for 150K? Hmmmm. And if any of that $150K is not spent, as Jack fears, so what? It is simply returned to the general fund. Jack knows that because this is exactly what he did with the CAO. He provided 50K for any work needed as part of the update, and then without advising the CAO committee members, the money was quietly returned to the general fund and “absorbed.” I only know because I asked about it.

As far as the need for outside legal council…. if the council is being provided the same legal advice that Royce Buckingham provided to the Planning Commission, then they certainly do need outside council. I am uncomfortable with the entire way this matter has been handled both procedurally and substantively, beginning with an executive session that ended with the Cherry Point amendments being splintered off from the comp. plan update. I do not believe there was any legal basis for this, nor do I believe that there is legitimate reason that the basis for this was withheld from the public. It violates the public participation goal of the GMA to take action without letting the public know why, nevermind allowing opportunity for discussion.

And things only went downhill from there, with the planning staff ignoring a council request for a resolution, and instead creating a SEPA review with alternatives, despite the lack of an established goal that was being achieved, or an analysis of how each alternative achieved this goal. The sole purpose of this sham was to allow Louws buddies in industry to come out and complain about how they had no notice (despite hiring attorneys to attend all the committee meetings) while whipping up a frenzied mob.

And let us be clear.. concern for unstated special citizens to which Jack refers is not the blue collar workers seeking jobs. It is his friends in big business and the big business lobby, like Tony Larson. The improprieties in the handling of this matter are beginning to add up in a geometric progression.