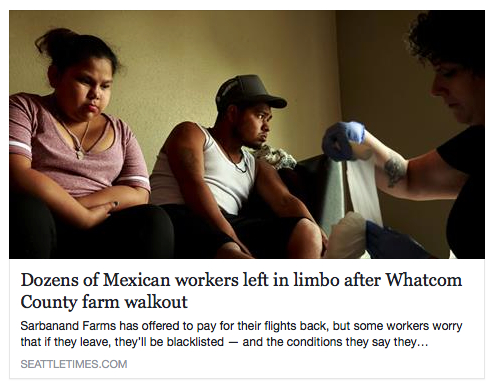 The August 12, Seattle Times article provided a good report on the recent events surrounding Sarbanand Farms and the tragic death of H-2A farm worker Honesto Silva Ibarra. However, in the article, local public relations guru Gerald Baron took an opportunity to defend Sarbanand Farms, and to hurl accusations at two local organizations which are trying to help the fired and displaced H-2A farm workers. From the article:

“‘From all we have been able to determine, the farm is an exemplary operator and has done everything that could be asked of them in this situation,’ said Gerald Baron, communications director for Whatcom Family Farmers, in an email.

“Baron said Ibarra’s death was seized on by activists with Community to Community and the independent farmworkers’ union Familias Unidas por la Justicia as a political opportunity.

“‘It is just too bad that in pursuing their issue they have to do so much damage to the good name of hardworking farmers who do such a good job of providing opportunities and caring for their workers,’ Baron wrote.”

Aside from Gerald Baron’s incorrect characterization and marginalization of Community to Community and FUJ’s efforts to give a voice to, and support, the unfairly fired farm workers who reported unsafe working conditions and mistreatment by Sarbanand Farms, and to seek answers about the tragic death of farm worker Honesto Silva Ibarra, his comments present the ultimate irony.

Baron is a local public relations (pr) professional who specializes in crisis and emergency communication, a crisis pr “ambulance chaser” if you will. He seizes opportunities when companies/organizations need pr communications after a crisis has occurred such as the E. coli O157:H7 outbreak that occurred in April 2015, during the Milk Makers Fest, held by the Whatcom County Dairy Women organization at the Northwest Fairgrounds in Lynden. There were 25 confirmed cases of E. coli O157:H7. Of those 25, there were 10 people hospitalized, and 6 people who were diagnosed by physician/s to have developed hemolytic uremic syndrome (HUS), a type of kidney failure. Baron was hired to handle that public relations crisis for the Dairy Women’s organization.

The current public relations crisis that Sarbanand Farms is experiencing would be right in Baron’s wheelhouse. It is not clear if he has been hired by their company, but since he is quoted in the Seattle Times article in which he tries to marginalize Community to Community and FUJ, it is possible he may be working for Sarbanand Farms to help navigate the company’s current pr crisis. We will have to see if he continues to be involved in media stories involving Sarbanand Farms and the current spotlight focused on its company.

Also, it’s possible that Baron may be providing his services, in general, on behalf of Whatcom Family Farmers, which could include doing what he can to try to ensure that his clients he represents through Whatcom Family Farmers don’t somehow get tainted by the Sarbanand Farms situation involving potential unsafe working conditions and mistreatment of its farm’s workers. Because that “tainting” could shine a spotlight on other Whatcom County farms and their operations and practices relating to the working conditions and the treatment of farm workers.