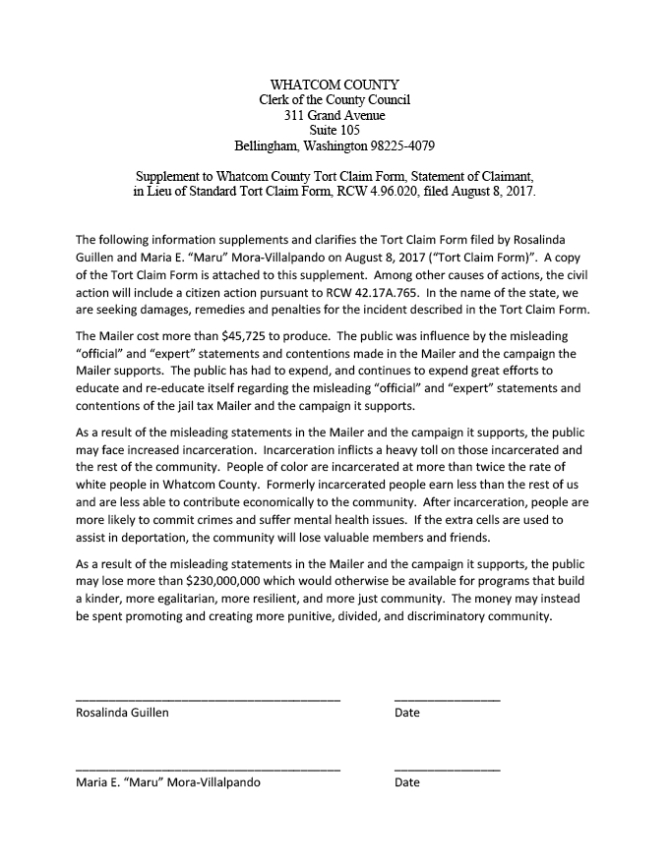 Whatcom County, WA – On Tuesday, August 9, a Whatcom County Tort Claim was filed on behalf of Rosalinda Guillen, Maru Mora Villalpando, the State of Washington, and a class of people affected by the incident. The form describes how County Executive Jack Louws, Sheriff Bill Elfo, Prosecutor David McEachran, other unknown individuals, and Whatcom County (together, “Defendants”) used public resources to produce and mail a misleading mailer which advocated for a tax increase, the construction of a new jail, and the re-election of Louws and Elfo (“Mailer”). Among other laws, the Defendants violated RCW 42.17A.555. The production of the mailer cost more than $45,725 to produce. The claimants stated that damages may exceed $230,145,725.

The funds and facilities used (directly or indirectly) for the production of the mailer include the County Executive’s Office, the Sheriff’s Department, and the Prosecutor’s Office. The purpose of the mailer was to influence the outcome of two ballot propositions and assist in the campaigns to re-elect Louws and Elfo. The Mailer was mailed only to registered voters before the 2015 election. The Mailer promoted the construction of a new jail in Whatcom County, citing overcrowding, life safety, and physical plant concerns in the current jail facility. The Sheriff, himself, was legally responsible for preventing overcrowding in the jail which he rectified soon after the jail tax measure failed. The mailer deceptively omitted that the current jail could be fixed for less money and Whatcom County’s high incarceration rate, among other things.