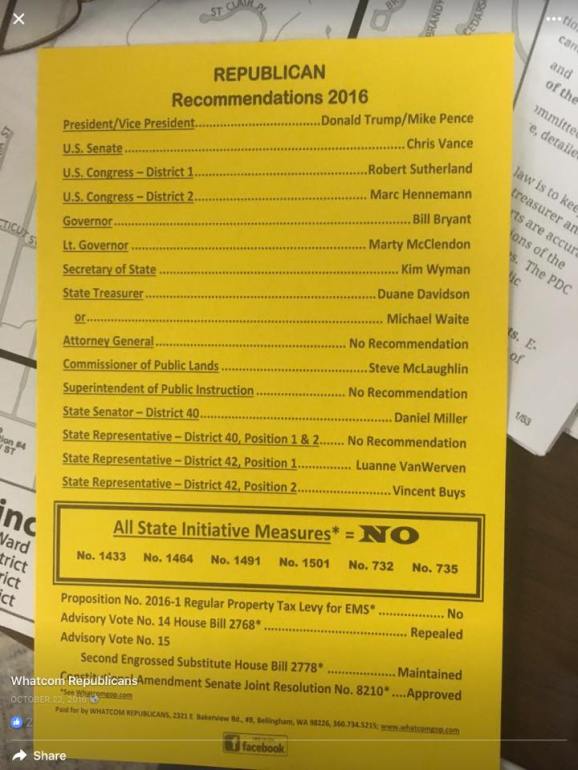 If you pay attention to local politics you probably know that in the 2016 general election, the Whatcom County Republican Party officially recommended then-candidate for President Donald J. Trump and his VP running mate, Mike Pence, on its 2016 “Republican Recommendations” list (shown in attached screenshot photo). And, even though many people have expressed disgust and anger with some, or most, of the Trump administrations’ actions thus far in his presidency, the Whatcom County Republican Party (known as the “Whatcom Republicans”) still displays, on its Whatcomgop.com website’s homepage, a graphic featuring the 2016 Trump/Pence logo with the “Make America Great Again” slogan alongside it.

Last week, some people attending the Aug. 14 – Aug. 19, Northwest Washington Fair in Lynden, told me that while the Whatcom Republicans had its regular campaign booth there, conservative candidates Mary Kay Robinson, Tyler Byrd, Dan Robbins, and Ken Bell were not part of that booth. Instead, those four candidates had a separate booth in a separate area (away from the Whatcom Republicans booth) in what’s called the Commercial Building. The booth displayed a banner that read, “Putting Community First: Non-Partisan Candidates Standing Together For Whatcom County,” and under the banner the photos of those four candidates were displayed. There was also candidate campaign literature, candidate campaign yard signs, and some campaign donation envelopes at their “nonpartisan” booth for their supporters to pick up. I have attached a couple screenshot photos of the booth. 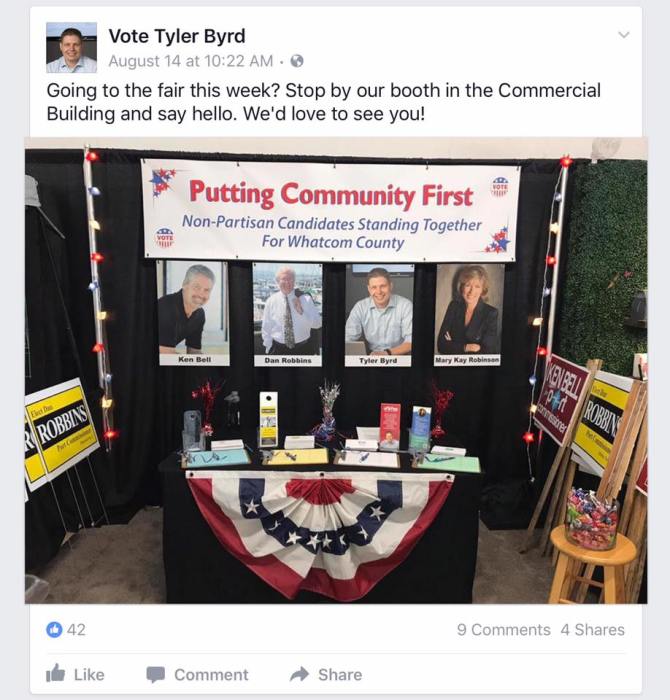 To do that, they are now selling themselves as “Non-Partisan” candidates. They’re betting on voters not being aware of, or not remembering, their past activities in terms of their relationships with the Whatcom Republicans — some of those activities occurred as recently as last month.

In reality, these four candidates are merely disaffiliating themselves on the surface from the Whatcom Republicans. If you look a little beyond that surface, you would see that these four conservative candidates who are now rebranding themselves as “Non-Partisan” candidates, want to have their cake and eat it too. They still desire, need and court Republican support, but they want it away from the public spotlight — somewhat like a secret affair of sorts.

Well, I am definitely aware of, and I remember, those candidates’ activities, so I want to make sure people are aware of those activities too.

Last month, the Whatcom Republicans held its annual picnic on July 13, at Berthusen Park in Lynden. This was the day that primary ballots arrived in most County voters’ mailboxes. The picnic flyer advertised: “Come Say ‘Hi’ to your state and local officials! Meet The Republican Supported Candidates For Local Office.” A screenshot photo of that picnic flyer is attached.

The Whatcom Republicans posted a July 10, 2017, post (I’ve attached a screenshot photo of that) on its Facebook page which reads:

“Republican and live in Whatcom County? You’re invited! It’s an event for the entire family.” Clearly, the picnic was for Republicans. 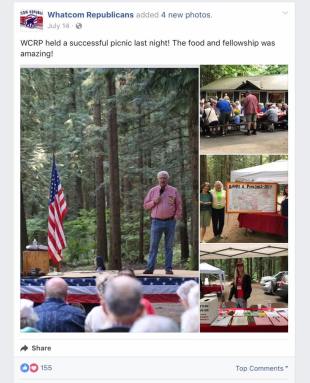 On the “Vote Tyler Byrd” Facebook page, there was a July 14 post about him and his family having attended what he referred to as a “community picnic,” never mentioning that it was the annual Whatcom Republicans’ picnic. The photos featured in that post include one that shows Byrd standing on the stage, speaking to the crowd.

Click on any of the graphics to view an enlarged version and to page through to the other graphics. 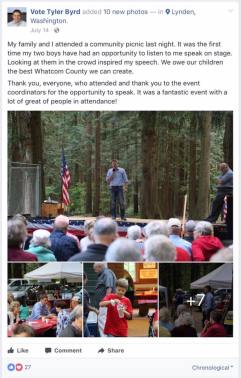 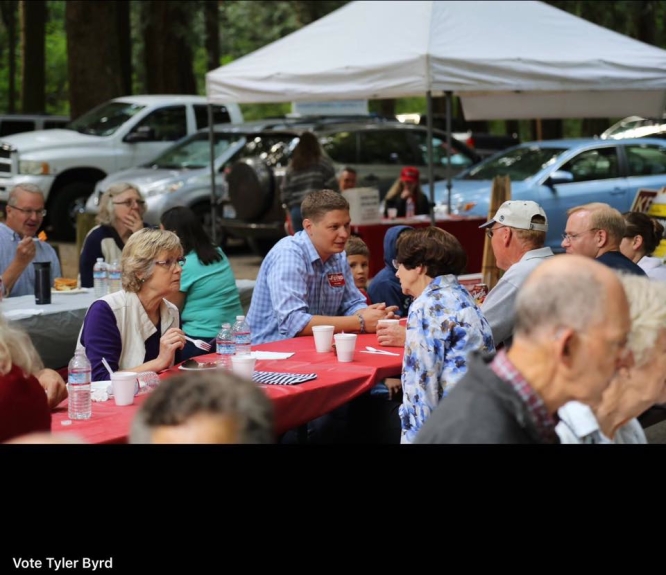 On the “Ken Bell for Port” Facebook page, there is a July 18 post about Bell attending what is referred to as a “summer picnic,” featuring three accompanying photos: one showing him shaking hands with Republican State Representative Vincent Buys, one showing him with Dan Robbins, and one showing him with Ferndale Mayor Jon Mutchler. Those three photos were taken at the Republicans’ picnic. The text above the July 18 post reads: “Ken attending a summer picnic with residents of Whatcom County. Have you endorsed Ken yet? Take a minute to visit Ken’s webpage and show your support.” The post does not mention that the photos of Bell were from the annual Whatcom Republicans’ picnic.

While I did not see any photos showing Ken Bell on the stage speaking to the crowd at the picnic, there is a July 19 post on the “Ken Bell for Port” Facebook page which shows a photo of him at the picnic, holding what appears to be a stack of “Ken Bell for Port” campaign donation envelopes in his left hand, as he is shaking hands with his right hand with former Port Commissioner Doug Smith. The text on top of the post reads: “Former Port Commissioner Doug Smith gives Ken his endorsement.” The post does not mention that the photo is from the annual Whatcom Republicans’ July 13 picnic.

(I have attached screenshot photos of those Facebook posts referenced above relating to the Whatcom Republicans’ picnic).

Click on any of the graphics to view an enlarged version and to page through to the other graphics. 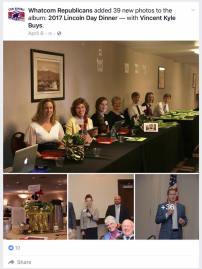 The “Vote Dan Robbins” Facebook page posted an April 11 post featuring a photo of Robbins and his two granddaughters with text above the post that reads: “Dan and his granddaughters had a great evening attending a local fundraiser event.” While it is evident from the photo that it was taken at the Whatcom Republicans’ Lincoln Day Dinner fundraiser event, there was no mention of the fact that the photo was from the Whatcom Republicans’ Lincoln Day Dinner fundraiser.

From reviewing photos (screenshot photos attached) posted on the Whatcom Republicans’ Facebook page, it appears that the now ostensibly nonpartisan candidates Tyler Byrd, Mary Kay Robinson and Dan Robbins all attended the event. In the photos I reviewed, I was unable to see any that showed Ken Bell in attendance. It is not clear if he attended.