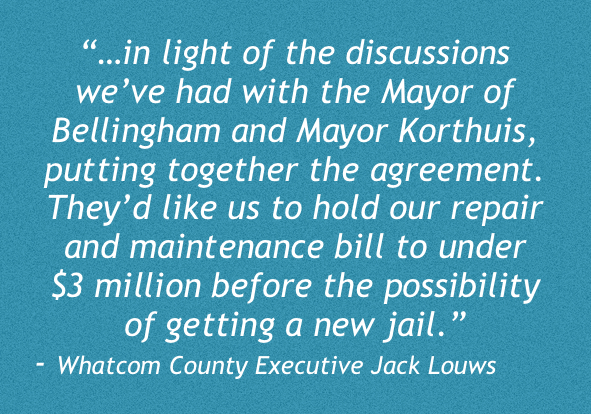 Here’s my latest letter to the council regarding the need to renovate the existing jail facility now. It was sent to council@co.whatcom.wa.us, and copied to all the city councils, the County Executive, and the Sheriff. Keep writing and calling!

I am writing to call on you to move forward as quickly as possible with renovations on our existing Whatcom County Jail facility on Grand Ave., that will address necessary and critical life safety issues.

I listened to the design2 LAST presentation during the September 12, 2017 Whatcom County Council Finance and Administrative Services Committee meeting. During the course of the discussion of the renovation after that presentation, after stating that this will be the first time the county will have gone through and completed some renovation on the existing jail, County Executive Louws made this statement:
“And that’s is in light of the discussions we’ve had with the mayor of Bellingham and Mayor Korthuis, putting together the agreement. They’d like us to hold our repair and maintenance bill to under $3 million before the possibility of getting a new jail.” I view this attitude as a refusal by these city leaders to take accountability for the prolonged neglect of the current jail facility.

It is not that elected officials ducking this responsibility is simply painful to witness, I believe that such voiced preferences are likely to have effected interactions with design2 LAST in a way that made them not apply the necessary degree of dedication to present some of the solutions for challenging life safety issues at the jail, such as for the smoke evacuation system. Regarding that particular system, design2 LAST CEO Lauri Strauss stated: ‘If we’re going to do it, we’re going to want to meet code and the cost of it was just over and above what we thought the benefits would be.” Remember these are life safety issues we are talking about! She added,”And the timing, you know this is a big job. We can see it stretching for four to five years to do the job, to do the work. So, we felt like, by then the new jail would be in place or at least under way and it’s just not worth the cost, the benefit’s not worth the cost to the county. So we recommend not going forward with that one.”

It can’t help but influence the solutions which a consultant firm comes up with when there is pressure from their client that discourages solutions that cost above a certain amount, which in this case is a very low threshold considering the amount and types of items that are in violation of code. It can’t help but influence their building assessment and cost estimates when they working under the preconceived notion that there is going to be a new jail built in the next 4, 6, 7 years.

My question is, how would that design2 LAST presentation been different if the firm had been told the following?: “We want to address all life safety issues on this jail regardless of if and when we build a new jail, because we realize it is inhumane to allow people to be kept there under current conditions. Please do this as efficiently and economically as possible, but all code violations and life safety issues must be addressed. Whatcom County is separately analyzing solutions to reduce our jail population and in the future we may add other types of facilities to increase programs and services that contribute to these solutions.”

County Executive Louws also made the following admission at that 9/12 meeting: “The life safety issues – five years ago we identified we had these – and we were holding off in the anticipation of possibly getting a new jail.” What’s more, when Council Member Donovan said that the $4 million dollars proposed to be spent to address life safety issues should have been spent ten or fifteen years ago, the executive confirmed that it was fifteen years ago or the year 2000 when the first consultant said that we need a new jail. Thus, we now have amassed plenty of experience, and liability, from making both workers and those incarcerated at the jail suffer dangerous and spirit-breaking conditions, in an attempt to benefit multiple campaigns for a new jail over the years, to realize we must stop this failed approach immediately.

We must all step up and accept our own accountability for the breach of humanity in not renovating the existing jail facility and bringing it up to meet safety codes. It’s time to change how we are using law and justice funds and those tied up by the premise of a new big jail that encourages an increased population so that we can finance this work on the existing jail adequately and swiftly, especially in light of the many egregious mistakes we have made all of these years. The results in improved physical and mental well-being of jail staff and residents will be one step towards better chances for changed behaviors and reduced crime while we simultaneously tackle all the other steps that need to be taken.

I believe it is apparent from all the public attention to this issue that you have a large body of people who are committed to the success of revamping our criminal justice system here in Whatcom County in order to dramatically reduce the need for lock-up capacity. I commend you for consulting with the Vera Institute and urge you to honor the information they are providing. Please invest confidence and resources in the Incarceration Prevention and Reduction Task Force and take advantage of the incredible amount of independent research and expertise of mental and behavioral health, and restorative justice experts.

Email addresses this letter was sent to: