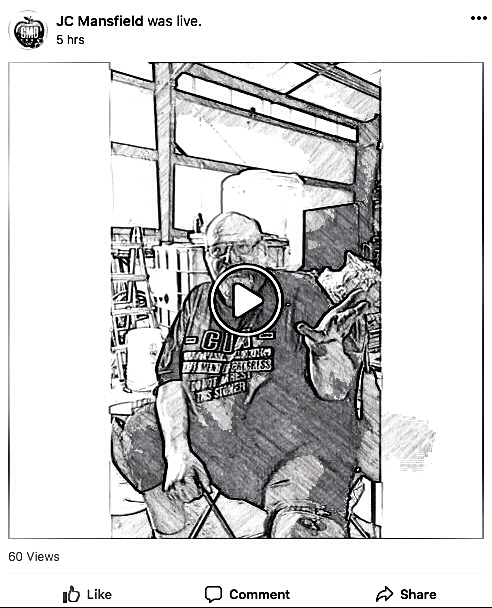 Jim Peterson, president of HomesNOW!, posted another Facebook video at about noon today, Sunday, May 13. Jim has recorded what must seem like countless videos in his past busy year, steadily keeping Whatcom County informed on the many issues effecting members of our community who do not have houses.

Jim was talking in his Sunday noon video about day 2 of the Shower Truck work party that was under way.  First, Jim mentioned efforts from the day before had gotten the “big stuff in” and today, he went on to say, seven to eight volunteers were getting walls and doors put in, and hanging gray water tanks (that would retain waters from the showers, so that when operational, that water can be dumped at appropriate RV stations for that purpose). During the rest of the week, Jim continued, the smaller finishing details for the truck would be tended to. 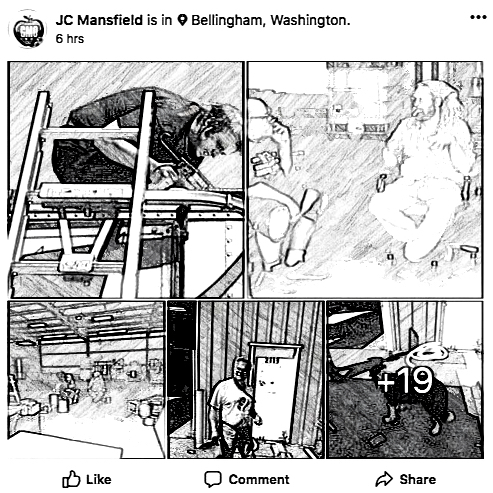 There was a list of remaining needs for the Shower Truck project that Jim provided in his  video, as well, such as a propane tank with proper fittings that would allow it to be refilled.  He referenced a list of additional needs that had been posted on Facebook that day. 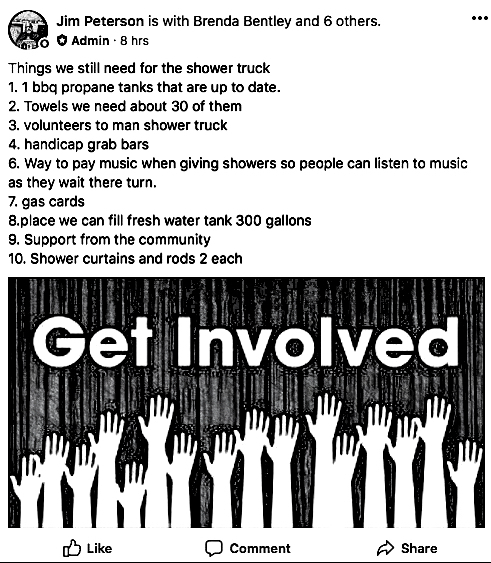 Another thing you can find, if you go on the Homes NOW! Bellingham Facebook group, along with some intermittent posts on other vital topics related to people without homes who need them, are abundant posts that can be pieced together to detail a two week history – with text, photos, and video – of the evolution of the Shower Truck project (a.k.a. ShowersNOW!) that has gone from a dawning idea back at the beginning of the month, to a running vehicle, loaded up with shower stalls and tanks, that is now nearing completion. 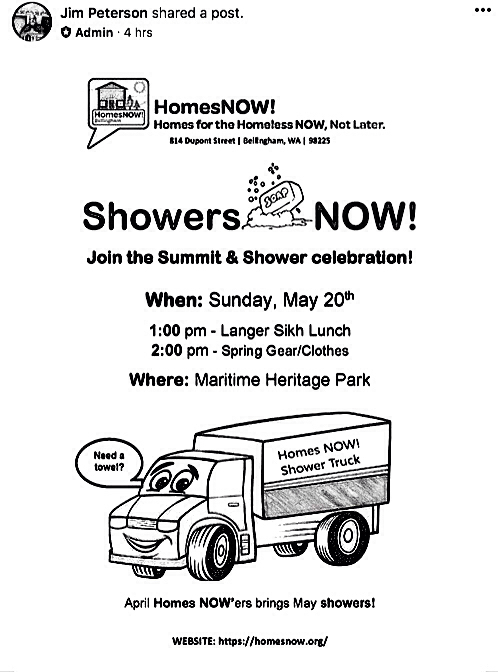 Since the summer of 2017, Jim Peterson, his HomesNow partner Doug Gustafson, and other HomesNow volunteer supporters have joined in a variety of efforts to stop homelessness in Whatcom County by the year 2020.  Along the way, people like Amy Glasser, J C Mansfield, Von Emeth Ochoa, Charlie Storrs, Lisa Papp, Markis Dee, and others have added their own creativity, backgrounds, and skills to create a well-rounded power-house that has, for one thing, built two tiny homes on the Lummi Reservation that are occupied now by people who formerly had no homes.

Due to a dedicated and unrelenting social networking effort to keep the community informed of all of their efforts directed to the needs of the homeless community, it’s easy for folks to go to the HomesNow. Not Later. Facebook page or the Homes NOW! Belllingham Facebook group to learn that another tiny home has already been built due to HomesNOW! networking and organizing efforts. The structure was built by Heritage General Building Contractors, and is simply waiting for a property to provide a foundation for it, so that one more person waiting for a home can be housed. Meanwhile, the building contractors at Heritage have plans on deck to complete a pilot tiny homes community when ample land is provided.

Other organizing efforts of HomesNow have brought in funds and supplies, and amassed people-power, to run a camp-out for homeless people on the lawn of Bellingham City Hall during December of last year, raising awareness about the needs for legal places for people without homes to sleep at night (and just exist in the city) without fear of being rousted, 24/7 restroom facilities, and dumpsters to help ensure minimal health and safety.  Since that camp-out, at least four dumpsters and four portable toilet facilities have been placed by the City at designated locations, facilities that HomesNow has not publicly been given credit by the City for aiding to bring about, but on which HomesNow, nevertheless, helps to check and maintain supplies.

HomesNow has regularly shown up, with their supporters and with community members without homes, at Bellingham City and Whatcom County Council meetings presenting pleas for City and County owned lands to be provided for safe camping areas and tiny home communities. They have, additionally, rendered accountability when council members and executive branches have failed to come through, on this important component and others, to providing solutions to the homeless crisis in our region. To date, no land for any tiny homes communities or a tent city has yet been provided by the City or County.

At the Bellingham City Council meeting on Monday, May 7, 2018, Jim Peterson announced to the council, during his three minutes of allotted open session public comment time, “We made a lot of progress, without the help of the city. We acquired a truck on Thursday of last week, and Saturday we will have a mobile shower truck up and running.  We will be having our first debut of it at our summit on May 20th at Maritime Heritage Park. We’ll be giving the homeless showers. They’ll have two stalls, and the whole thing cost us $5000.00.”

Jim still worries he won’t meet his ambitious deadline of having the project proceed from developing out of thin air a couple weeks back, into a working facility to provide its first showers to people without homes (or shower facilities) at the next Homeless Summit from 1-4 p.m on Sunday, May 20 at Bellingham’s Maritime Heritage Park.

Jim does not want to disappoint.

But how can any of us be disappointed, except in our own inability to participate and help HomesNow meet its goals, when Jim, Doug, and a wide assortment of both regular volunteers and those who show up with fresh faces, day after day, are pitching in to do their part to end homelessness in Whatcom County by 2020. It’s a huge undertaking, of which a shower truck is just one small part, but once again for the ShowersNOW! project, community members have been offering themselves generously the way enthusiastic supporters of HomesNow always do: all out, and with urgency born of being constantly connected with head and heart to the daily crises arising for people who do not have shelter, critical hygiene services, or other forms of essential stability in their lives – people, who at any minute, could be you or me.

The HomesNow! office is located at 814 Dupont St. Bellingham, Washington, 98225

One thought on “ShowersNOW! by HomesNOW! / Noisy Waters Northwest”