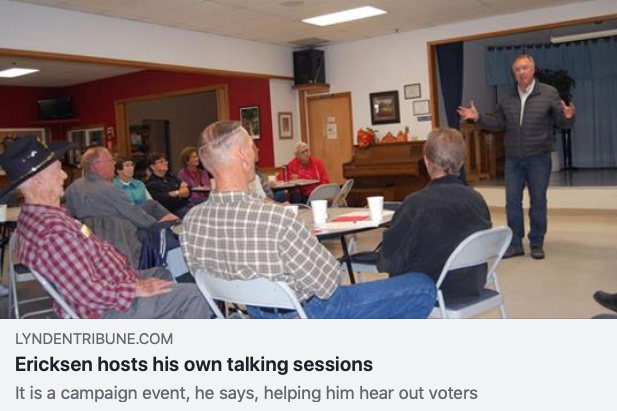 26 days and, once again, there is no doubt that Doug’s Got to Go. Today’s highlights are from yesterday’s 9/19/18 Lynden Tribune arcticle, “Ericksen hosts his own talking sessions,” in which Calvin Bratt reports back from Republican Senator Doug Ericksen’s campaign stop at the Lynden Community Center on Saturday.

The most validating news from the article was a reassurance that by firing Senator Ericksen in November, we will be effectively running Donald Trump out of our County on a rail:   “A supporter of President Trump, Ericksen echoed administration stands in favor of a wall on the Mexican border, relaxation of government rules to ease up on businesses, and opposition of sanctuary cities for illegal immigrants.”

And to help seal our justifiable contempt, the story on Senator Ericksen did not come to fruition without some inaccurate disclosures by our 42nd Legislative District incumbent, such as this one, “To a question on safeguarding schools, Ericksen cited his open discussion with students at Meridian High School — the only school in the county to let him do so — last March that produced an ‘amazing’ range of discussion, including students’ urging of better monitoring and intervention of peers who show mental-health risks.”

In Senator Ericksen asserting that Meridian High was the only Whatcom County school to “let him” have an open discussion with students regarding “safeguarding schools,” he failed to mention that he did not make that request of high schools within the Bellingham School District or Mount Baker School Districts. You can read more about this and Senator Ericksen’s ‘grandstanding media event’ at Meridian High School at this link: https://searchlightreview.com/2018/06/03/following-up-on-senator-ericksens-grandstanding-media-event-at-meridian-high-school/

The report may help explain other reasons school districts wouldn’t be thrilled to have Senator Ericksen putting on a show at their schools.